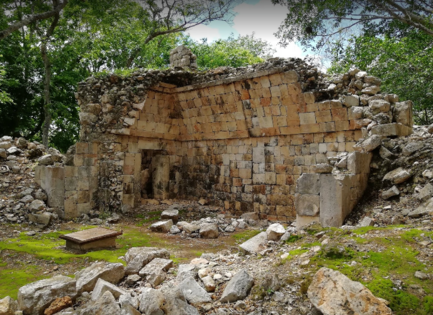 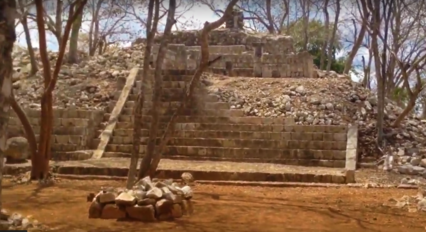 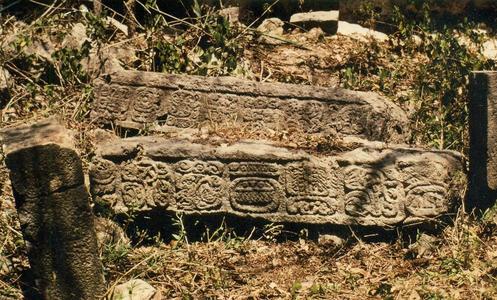 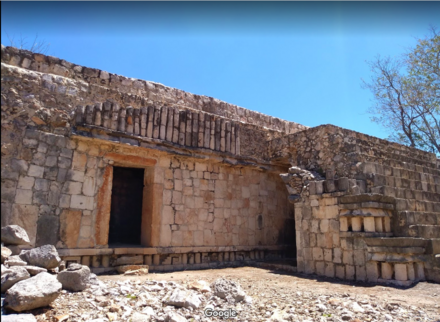 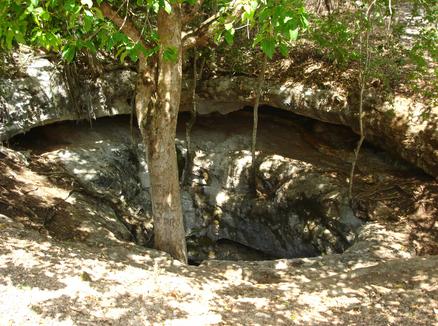 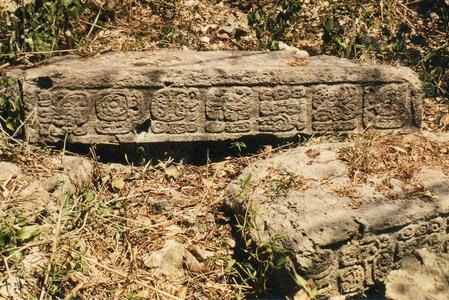 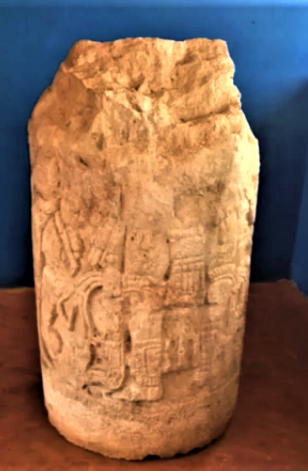 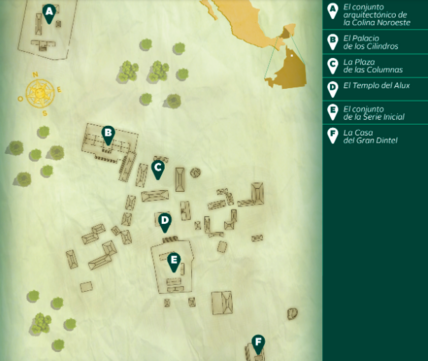 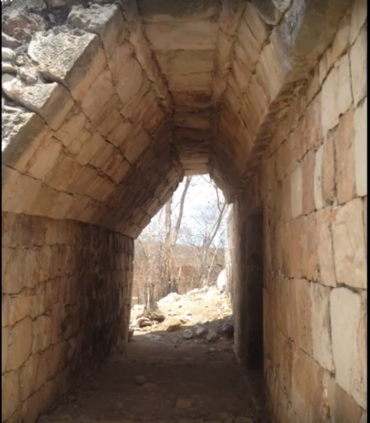 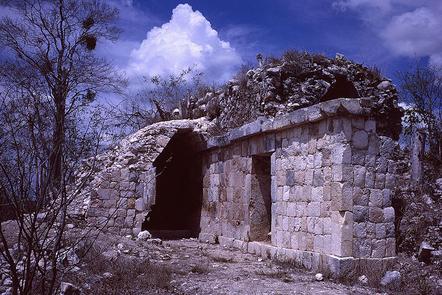 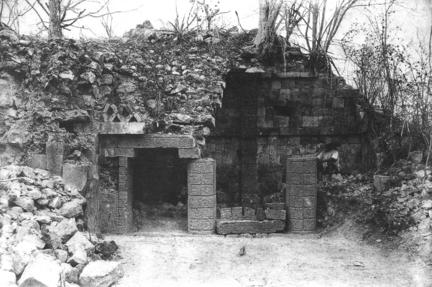 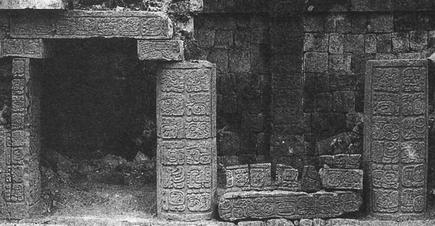 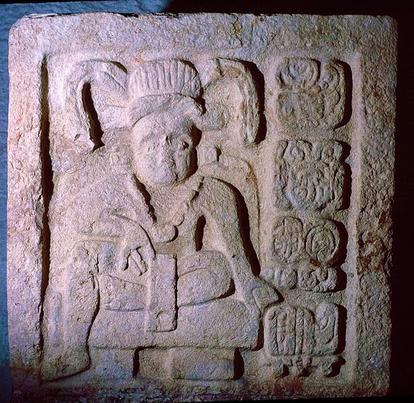 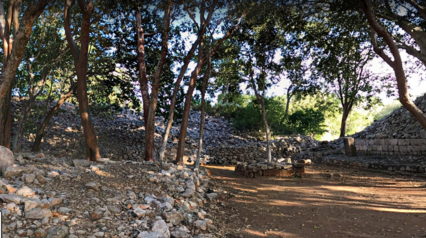 DESCRIPTION
Xcalumkin is a Mayan archaeological zone located 45.5 miles/73 kms northeast of the city of Campeche. Its name was recorded by explorer Teobert Maler in 1880’s and can be translated to “double good earth exposed to the Sun”. The Chilam Balam of Chumayel, an oral history written down in colonial times, mentions a city named Tixcalomkin and may indicate the original place name for the site. The ruins are spread out over a large savannah with some structures located upon the low surrounding hills. It reflects a pure Puuc style of architecture, and is noted for the numerous glyphic texts that have been discovered there.

The site does not contain an acropolis, pyramid or ballcourt, which would indicate a secondary status. A few of the 40-odd structures have been partially restored with many hidden under the vegetation. Others are just a pile of exposed rock. The ruins cover an area of 3.86 square miles/10 square kms, though the core area is easily visited.

There are two natural cenotes along with a number of man-made chultuns that provided water to the site. The area is part of the Xcombec Valley located east of the town of Hecelchaken.

The site is most easily reached from Campeche by driving north on Highway 180 to Hecelchaken. In Hecelchaken take the Cumpech cross road east out of town for about 8.5 miles/13.5 kms. A blue pyramid sign alerts you to turn south down a dirt side road .6 miles/1 km to the site entrance.

HOURS:8 A.M.-5 P.M, everyday
ENTRANCE FEE: Free
GUIDES: none on site
SERVICES: Bathrooms, Service kiosk
ON-SITE MUSEUM: no, though some interesting artifacts are viewed within the service kiosk area, and there is a good regional museum in the nearby town of Hecelchakan
ACCOMMODATIONS: Campeche offers a wide variety of hotels and restaurants
GPS: 20d 10’ 19” North, 90d 00’ 36” West
MISC: best to visit during the dry season November through May

HISTORY AND EXPLORATION
Xcalumkin traces its earliest occupation to the Late Pre-Classic (300 B.C.-250 A.D.). There was little development until the Middle Classic Period c.500 A.D. The site reached its zenith during the Late to Terminal Classic period 600-1000 A.D. Most of the structures seen today date from the 8th- 9th century and display the three phases of Puuc architecture; Early, Colonnette, and Mosaic. This architectural style is named after the low range of hills that cut across the central part of the Yucatan Peninsula.

A number of lintels, columns, moldings, and door jambs have been discovered at the site containing over 250 hieroglyphic inscriptions that correspond to the years 728-771 A.D. The texts record 14 separate individuals. Unlike at larger sites where the ruler is named “K’ul Ahaw”, sacred lord, here the rulers are termed “Sahal”, a personage of lesser stature. Other titles mentioned include “Itz’aat”, wise man; “Matz(a)”, educated man; “Ah tz’ib”, scribe; and “Ah kin”, priest. The emblem glyph for the well-known Maya site of Jaina, located about 30 miles/50 kms away, is recorded a number of times which would seem to indicate a close relationship between these two cities. It would appear that the site was abandoned sometime after 1000 A.D.

Xcalumkin was first reported on by Teobert Maler in 1887. He produced several photographic impressions and took architectural notes. E. H. Thompson visited the site in 1903 and prepared plaster casts of many of the inscriptions for the Peabody Museum. Sylvanus Morley (1918) and Thomas Gann (1924) made brief visits. Harry Pollock and H.B. Roberts with the Carnegie Institution made detailed reports in 1935. Sporadic investigations were made in the mid-twentieth century by Alberto Ruz L., George Andrews, and Paul Gendrop, amongst others. In the 1990’s excavations and consolidations were carried out by the Museum of Mankind (Paris), and by Antonio Benavides C. of INAH.

STRUCTURES
Xcalumkin is made up of five main groups with numerous smaller groups and individual structures. Most of these are set upon raised platforms. A number of the structures have partially preserved corbeled roofs. The INAH guide lists these main groups as A-F, and will be followed here for ease of interpretation. The site is oriented on a north/south axis, with the structures irregularly aligned anywhere from between 4 to 46 degrees east of north.

The first group to be reported on is in the northern sector of the site and is called the Northwest Group, Group A. This group is set upon a small hill about49 feet/15 meters in height. The main structure here, as are most of the others, is of a palace type with three south facing chambers. A flying stairway leads up to a ruined second story. The stone work throughout the site is very well executed, and would appear to reflect the importance of the individuals who lived here.

The next group to the south is the Palace of the Colonnettes/Cylinders, Group B. It is set around a central plaza, and is the only structure of the group still standing. It was originally comprised of 10 rooms though only three currently remain. This structure, along with the rest of the site, was heavily looted in the 1950’s and 60’s for its finished stonework and glyphic art. It features a south facing flying stairway to a second level which once housed a now destroyed structure. The flying stairways are a Puuc architectural innovation, and denote a thru passage which runs underneath the stairway. The structure is named for the decorative colonnette motif that forms an upper band that graces the façade of the structure. This motif is also clearly seen at the larger Palace of Sayil, though Xcalumkin does not incorporate the alternating Chac masks. A lower base molding exhibits rows of short colonnettes interspaced by a stepped fret design. Inside this structure is a stone anthropomorphic sculpture featuring a female figure emerging from the jaws of a reptile, and known as, “X’nuk”, the “old woman/guardian”. The remains of ruined structures flank the rest of the plaza.

The Plaza of the Columns and the adjacent Plaza of the Altars, Group C and D, are located just to the southeast of The Palace of the Colonnettes. These groups consist of several structures that each ring a small plaza. The main structure here, the Temple of the Alux, is located on the south side of the Plaza of the Altars. It is a single structure erected upon a large platform base that has been partially restored. A wide central staircase flanked by balustrades leads up to a single chamber divided by two columns. A small altar is visible inside the structure. At the foot of the platform base are two small monuments. One, in the shape of a rectangle, exhibits a cross hatch design referencing the mat symbol, a sign of authority. The second is very eroded and is in the shape of a partial column with a mushroom top. The other structures, stripped of their finished stone work, are in a mostly ruined state.

The Initial Series Group, Group E, is located south from the Plaza of the Altars. It is set upon a raised platform, and currently consists of two standing structures, and two ruined structures. The North structure contained a significant number of ornately carved stone in the form of columns, lintels, capstones and panels. A hieroglyphic inscription, Panel 2, was located within the structure that displays a Long Count date of 9.15.12.6.9, 7 Muluc 2 Kankin, equating to October 25/27, 743 A.D. This inscription was looted in the 1960’s. There were two carved columns and associated capstones and lintels that once graced the entrance to the structure. Some are now in the Museo Baluartes la Soledad in Campeche and at the museum in Hecelchakan, while the others have been looted. They mention, among other historical information, the names of the owners/residents of the structure which is quite unusual. The structure originally consisted of three chambers with the east chamber containing the most important glyphic material. The rear portion of a corbeled vault remains intact.

The South Structure is a nicely restored building which originally consisted of three chambers of which only one remains standing. Three columns with capstones support a corbel vaulted roof. It has a plain exterior which was once decorated with painted stucco motifs. There are two rear entrances. It contains no hieroglyphic inscriptions.

Further south is the Hieroglyphic Group, Group F. This group is situated atop a platform base and contains three structures of note. Each of these structures at one time contained expertly carved columns, lintels and jambs. The most important structure is the House of the Great Lintel. This structure originally housed three chambers of which only the center chamber remains. It still supports a large, carved lintel that spans the main entrance. A figure of a warrior is seen on the outside surface, while the interior surface displays eight glyph cartouches.

The site has other structures spread across the low surrounding hills, though these are mostly in a ruined condition. Many of these structures contain chultuns, underground water storage tanks. 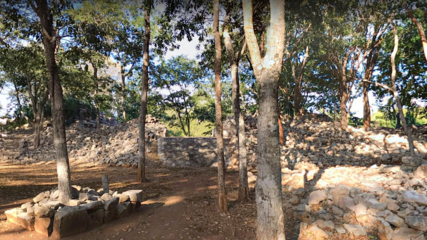 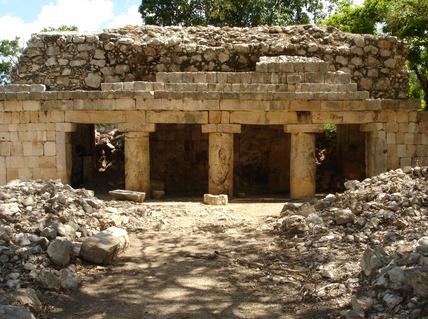 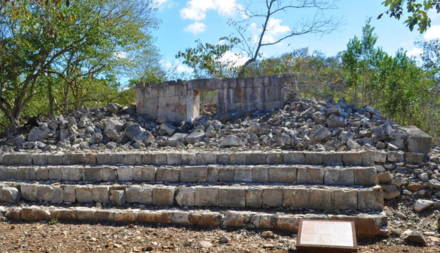 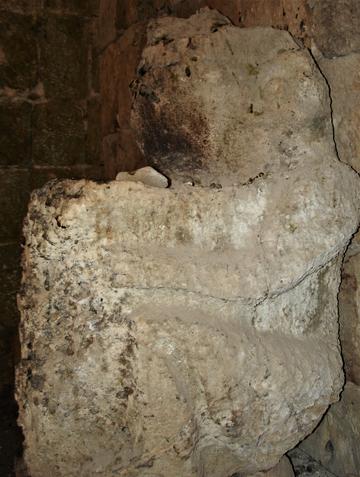 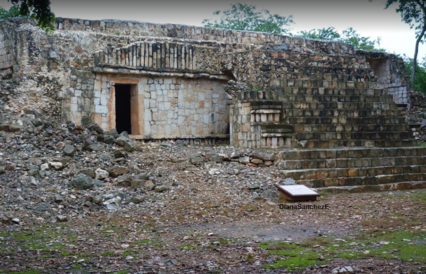 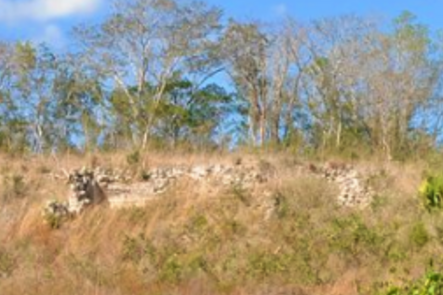 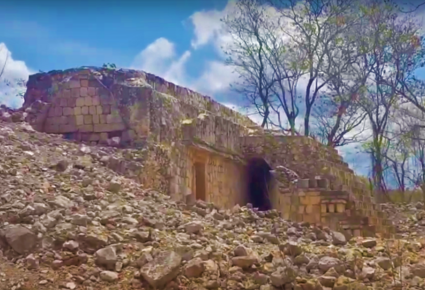 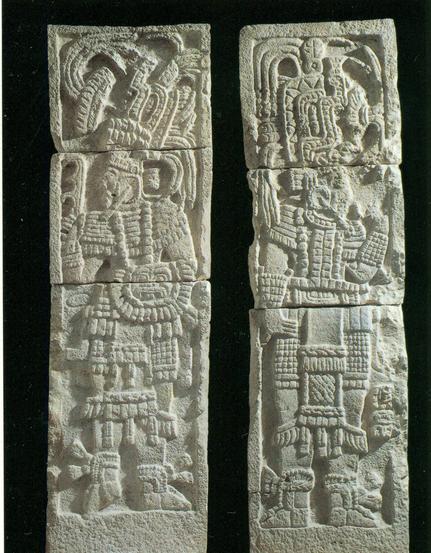