DESCRIPTION
Seibal is a medium sized site located in the Peten, Guatemala, along the Pasion River, a tributary of the mighty Usumacinta.  It is set on a high embankment amidst the tropical rainforest at a strategic bend in the river. The site dates back to the Middle Pre Classic (800-300 B.C.). It is composed of three main architectural groups connected by ancient sacbeob (white stone roads), containing more than 50 carved stelae and numerous other monuments. There are 2 ball courts and more than 20 altars.

It is located 17 miles/27 kms east of the site of Dos Pilas, which was to have an enormous impact on its history. Both of these sites are found just off Highway 5 near the village of Sayaxche. Seibal is most easily reached by flying into Flores, an island city in Lake Peten Itza. From there it is about an hours drive south to the town of Sayaxche. Access to the site is from the river, so passage by boat needs to be arranged. Flores can also be reached by road traveling north from Guatemala City on Highway CA14 onto Highway 5, or by road west from Belize on Highway CA13.

HISTORY AND EXPLORATION
Seibal was first settled around 900 B.C. A cache containing jade artifacts was recovered from this time period that points to an interaction with the Olmec sites on the Gulf of Mexico. These early settlements were mostly confined to Group A.

The site grew during the Late Pre Classic (300 B.C-200 A.D.), and it was during this period that ceremonial centers began to be constructed.  Group A was expanded, and Group D began its development. Towards the end of this period the site experienced a decline in population from its peak of around 10,000.

This decline carried over to the Early Classic (200-400 A.D.), with the site being nearly depopulated by 300 A.D. It lasted until the 7th century when the city began a comeback linked with that of the great northern city/state of Tikal. In 650 A.D. renewed construction and population growth took place with the restoration and expansion of the ceremonial centers in Group A and Group D.

In 735 A.D. Seibal suffered a complete and catastrophic defeat by the nearby city of Dos Pilas. It is known that the king of Seibal, Yich’aak Balam, was not sacrificed, but was made a vassal under the king of Dos Pilas, Ucha’an Kin Balam. He commissioned a hieroglyphic stairway at Seibal to commemorate his victory, and ritually defaced earlier stelae and monuments to erase the sites prior history.

Seibal was to remain a vassal city under the thumb of Dos Pilas until its own defeat in the latter half of the 8th century. In 771 A.D.  Ajaw B’ot acceded to the throne of an independent Seibal. There followed a brief hiatus from around 800-830 A.D. with no new construction or monuments erected.

In 830 A.D. Chan Ek Hopet, ruler of Ucanal, defeated Seibal and installed Wat’ul Chatel as king. Seibal comes under the influence of Central Mexico and of Tikal, and begins a renaissance in art and building construction.  Highly artistic stelae showing both Maya and foreign influences begin to be erected beginning in 849 A.D. The last recorded monument at Seibal was erected in 889 A.D. by Wat’ul Chatel commemorating a Katun ending. By the end of the century the site was mostly abandoned, though evidence shows there was some settlement that continued for another hundred years.

The first explorations were initiated by Federico Arthes of the Guatemalan government in 1892. It had been reported that numerous stelae and monuments had been discovered at the site, and Federico was sent to make plaster copies of some of these for the 1892 World Columbian Exposition in Chicago. There followed Teobert Maler in 1895, and Sylvanus Morley and Herbert Spinden in 1914. Next came John Graham and Timothy Fiske under the direction of Gordon Willey in 1961, and Ian Graham in 1962.

STRUCTURES
​​There are three main groups at the site and run on an east/west axis. Though there has been a fair amount of research on the sites history, only two structures have been excavated and restored. Most of the visible structures date from the Late Classic.

The main groups were built on three areas of high ground. The largest by area is Group A which makes up the western portion of the site. It is an area measuring about 1300 feet/400 m north-south, by 656 feet/200 m east-west. The group consists of two very large plazas and one smaller one.

The North Plaza contains a ceremonial passage that runs between two low mounds along its eastern edge. This gives access to a stairway that leads down to a sacbe.

The Central Plaza is a large plaza containing over 50 mounds, and dates mostly from the 9th century. Most of the important structures are on the east side. Structure A-18, a truncated pyramid, holds down the northeast corner. The rest of the east side is taken up by two large structures A-10 and A-14, sharing a raised platform. Structure A-14 is an acropolis style structure. A wide stairway (125 feet/38m) leads down to the plaza level. There are three hieroglyphic panels that are incorporated into the lower steps. Structures A-15 and A-16 are part of the Acropolis East Patio. In between Structures A-14 and A-10 are two smaller structures A-11 and A-12.

Structure A-10 is a pyramidal structure and has a central stairway that reaches up to a terrace flanked by wall panels with Stela 6 embedded in the center. It reaches a height of about 59 feet/18 meters. A temple of perishable material crowned the flat summit.

Across from Structure A-10 on the west side of the plaza are Structures A-20 and A-19. Structure A-20 is a small truncated pyramid. Structure A-19 is a ballcourt similar in design to one found at Uxmal.

The south side of the plaza has low, linear mounds and forms the north side of the South Plaza. This plaza contains several, mostly stand-alone structures.

The largest structure here is Structure A-24 on the west side of the plaza. This is a pyramidal structure 59 feet/18 meters in height crowned with a small temple. It is accessed via a stairway off a large platform that extends out into the plaza.

Structure A-3 is located in the center of the plaza. This is one of the two structures that have been excavated and restored at the site. Known as a radial pyramid, it rises up on three tiers to a total height of 20 feet/6m. There are stairways on all four sides, each fronted by a stela of very high-quality workmanship (Stela 8-11). A stone structure with four entryways crowns the top of the summit that at one time contained corbeled vaulted chambers. Inside the structure is another stela, Stela 21. The upper frieze once contained brightly colored modeled stucco decorations. Over each entryway was a statue of Wat’ul Chatel. Other figures and decorative panels interspaced the rest of the frieze. A-3 and its attendant stelae were dedicated by ruler Wat’ul Chatel in 849 A.D.

A sacbe, Causeway II, leads to Group C which is in between, and south of, Groups A and D. There are numerous structures associated with this group that stretches out along the sacbe. At the end of the sacbe is a small plaza with one main structure, Structure C-79. This is the only other structure that has been excavated so far at the site. It dates to the same time period as Structure A-3. It is a three-tiered circular structure with a rectangular temple platform atop. There are two stairways that lead up to the temple platform. In front of the structure is a circular jaguar altar. Some researchers believe it could have an astronomical function, while others recognize it as a Central Mexican temple design to the wind god, Ehacetl. A ballcourt, Structure C-9 is also located within this group.

Causeway III runs east from Group A to Group D. This group though slightly smaller than Group A contains over 70 structures set about in a rather compact fashion. It became the main civic area in the Late Classic period (600-900 A.D.) The group consists of five plazas and several courtyards. The highest structure here is a pyramidal structure, Structure D-32 at 46 feet/14 meters. It is located on the east side of the Central Plaza. Only one stela has been found so far in this group.

There are many other smaller structures, and dozens of residential platforms that lie at the periphery of the core center.
​ 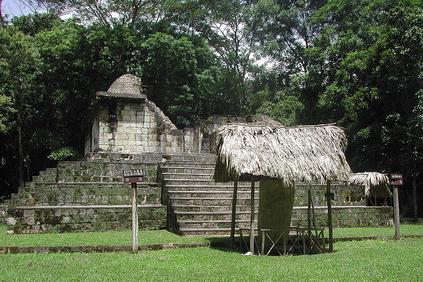 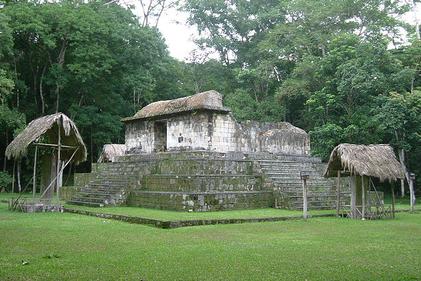 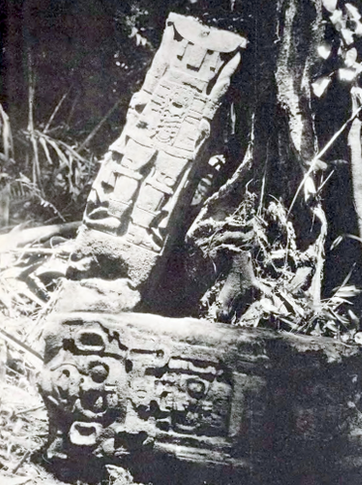 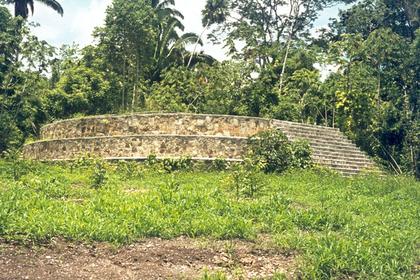 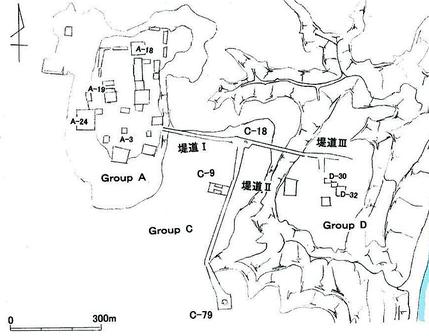 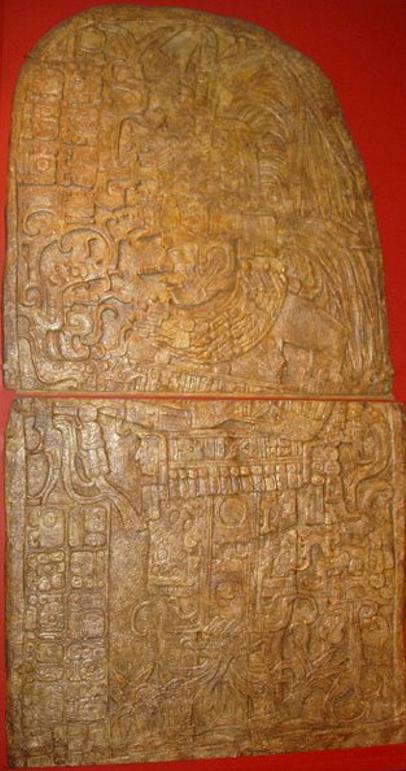 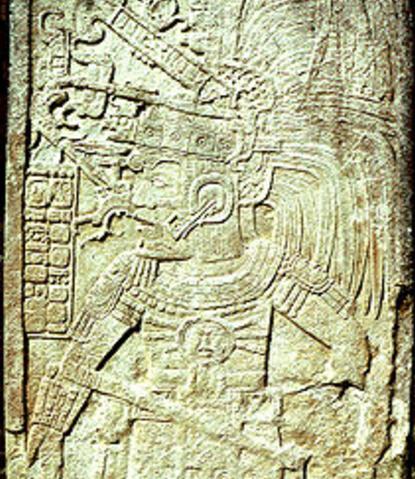