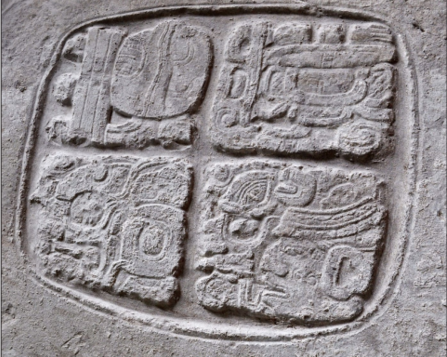 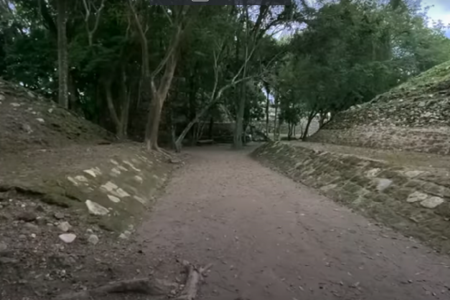 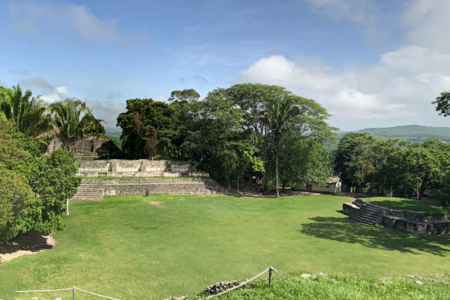 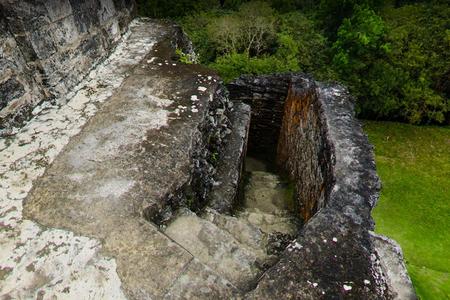 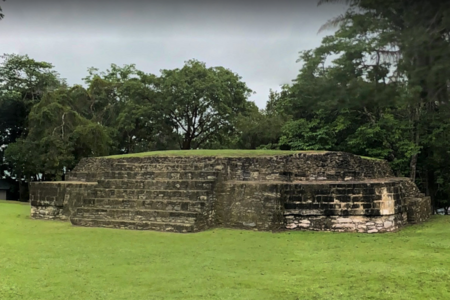 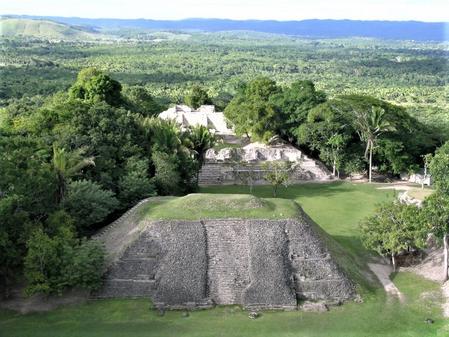 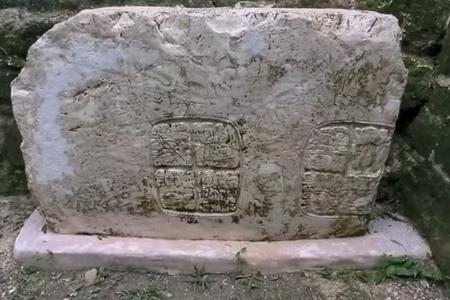 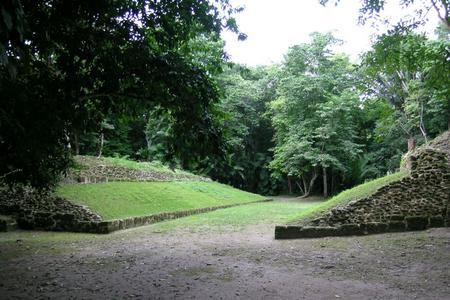 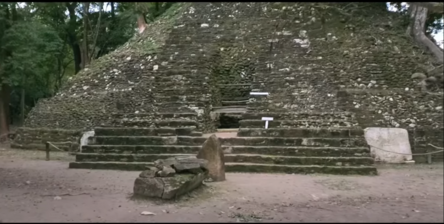 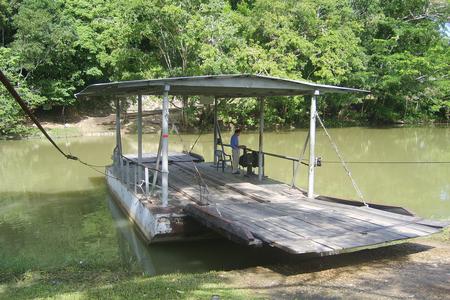 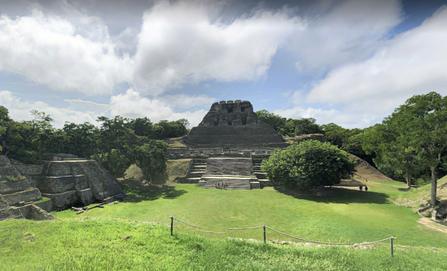 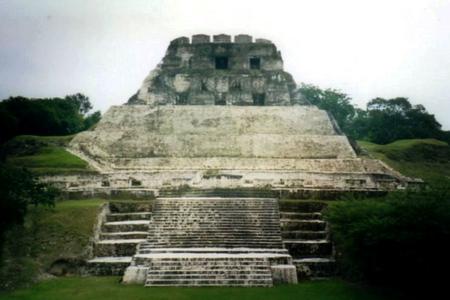 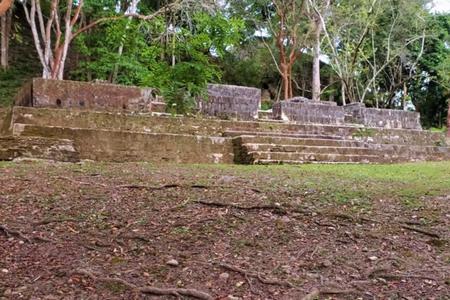 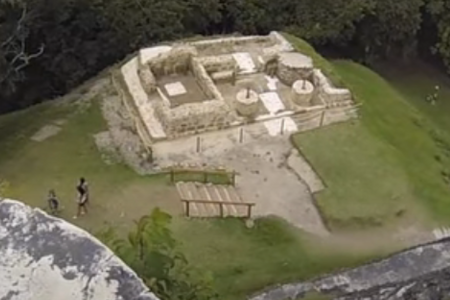 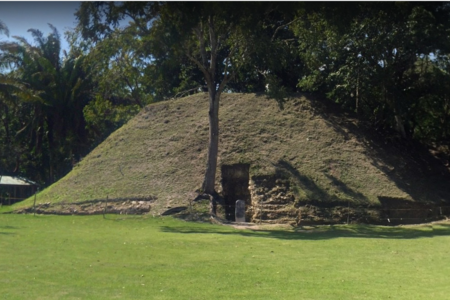 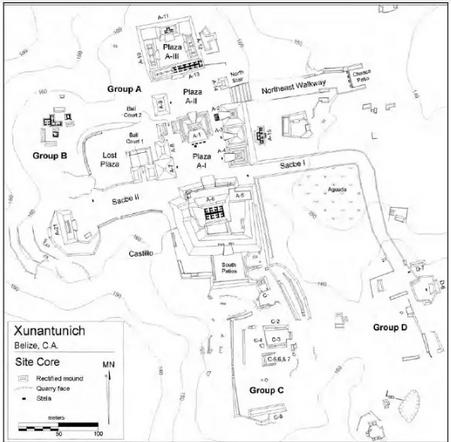 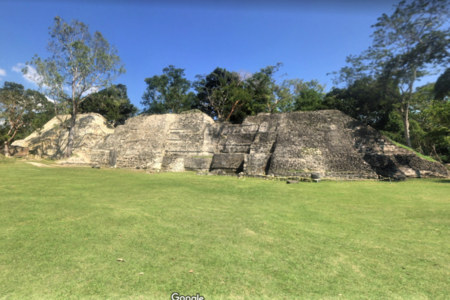 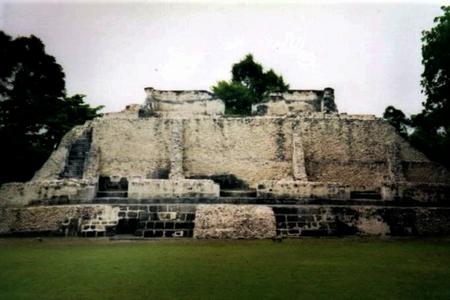 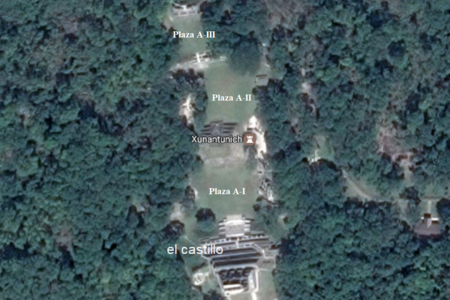 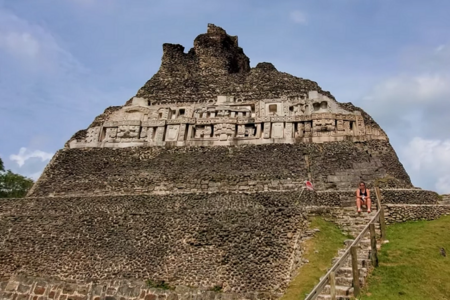 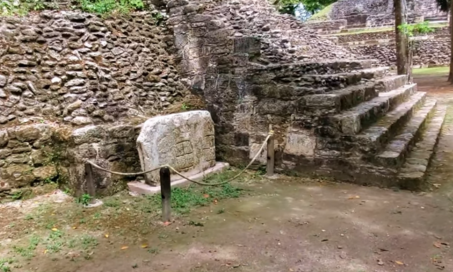 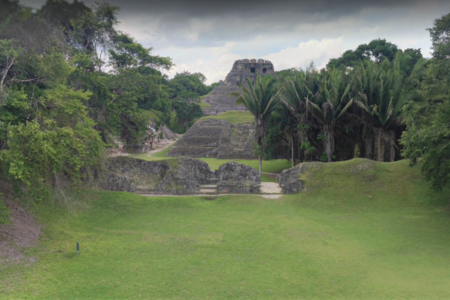 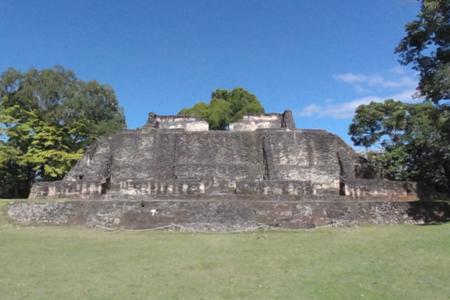 DESCRIPTION
​​Xunantunich, “Maiden of the Rock/Stone Woman”, is a Classic Maya (200-900 CE) archaeological zone located in the western part of Belize along the border with Guatemala. It is situated on a high ridge overlooking the Mopan River. This strategic location allowed for the control of trade along this important river, and through the adjoining valley.

Xunantunich is set within a tropical forest preserve with a compact core center. The extent of the entire site has been determined to be about 3 sq miles/7 sq kms, though the core area is easily visited.

The site is easily reached from Belize City or Orange Walk by the Western Highway to San Ignacio. From there it is about eight miles to San Jose Sucozt. To enter the site the river needs to be crossed by means of a whimsical, hand operated cable ferry.

HISTORY AND EXPLORATION
Xunantunich had its beginnings in the Late Preclassic (300 BCE-200 CE.). The site began to expand in the Early Classic (200-600 CE), and grew in importance as a commercial center since it controlled the trade along the river and through the adjoining valley.

There have been a number of stelae (carved stone markers) and panels rediscovered here which are slowly bringing the sites history into focus. Xunantunich, like many other Lowland sites, was involved with the struggle between the two superpowers of the day; Tikal and Calakmul. These Lowland sites often changed allegiances between the two superpowers, and amongst themselves. Xunantunich appears to have been subordinate to Naranjo during the Early Classic Period which was itself under the influence of Calakmul. Caracol, also a vasal city of Calakmul, is located 26.5 miles/42 km south of Xunantunich. Though Naranjo and Caracol were nominally under the influence of Calakmul, they engaged in warfare between themselves.

Two discoveries were made in 2016 that has provided important information regarding interactions between the most powerful polities of the time. These discoveries consisted of two large carved panels located in front of Structure A9, and flanking a central stairway.

The panels, Panel 3 and Panel 4, have been identified as being originally part of a famous hieroglyphic stairway erected by K’an II on 9.10.10.0.0 13 Ahau 18 Kankin, December 7, 642 CE, from the powerful site of Caracol. Caracol was defeated and the city sacked by Naranjo in 680 CE. The stairway was removed by the victors as war trophies, and its remains have been found mostly at Naranjo, but also at Ucanal and now Xunantunich which could indicate their direct involvement in the attack as allies of Naranjo. The glyphic information recorded on the panels helps to fill in some of the blanks concerning the overall historical text of the stairway. It has been suggested that Structure A9 may have been the funerary temple of a royal warrior who fell in that battle.

The new information has also helped to date the founding of the Snake Kingdom dynasty at Calakmul from its original location at Dzibanche, the result of an internal civil conflict.

It is thought that Xunantunich may have benefited with the arrival of nobles from Naranjo when that city experienced a decline after its defeat by Tikal in 744 CE. The site was occupied into the early part of the Terminal Classic (900-1150 CE), and abandoned around 1050 CE, outliving many of the other Lowland sites.

Xunantunich was first visited by Thomas Gann in the 1890’s (reported on in 1925). There followed explorations and excavations by Teobert Maler (1908), Sylvanus Morley (1928), Eric Thompson (1942), and later by A.H. Anderson, Linton Satterthwaite, Euan Mackie, and Peter Schmidt. In the 1990’s the Xunantunich Archaeological Project directed by Richard Leventhal initiated a comprehensive program of excavation and survey at the site and surrounding area.

Jaime Awe of the Belize Institute of Archaeology has been over seeing some of the current investigations via the Belize Valley Archaeological Reconnaissance Project since 2015.

STRUCTURES
The ceremonial, civic, and residential areas of Xunantunich are composed of four main groups arranged around several plazas. These contain over two dozen pyramids, temples, palaces, and other structures, and are aligned on a north/south axis. A number of burials have been uncovered through excavation work. The rain forest is a very dominant feature here with the bare minimum cut back to be able to observe the structures. Many of the structures are still unexcavated.

Group A contains the most important structures at the site. It is the ceremonial and civic heart of the city.

Structure A6 is known as “El Castillo”. This is a large pyramidal structure that reaches a height of 130 feet/40 meters, the tallest structure at the site, and is located on the south side of Plaza A-I. Excavations have revealed three constructions phases, the earliest dating to c.400 BCE. The next constructions were initiated c.450 CE, with the last phase beginning c.750 CE.

A wide stairway leads up from Plaza A-I to a linear structure that runs along the north side of the Castillo. An interior stairway leads further up to two larger temple structures that exhibit different construction phases. The lower of the two structures was constructed c.800 CE, and contains the remains of an elaborate frieze that once wrapped around the temple. The east façade exhibits astronomical associations including references to the Sun, Moon, and Venus. The original has been covered with an exact reproduction to preserve it from the elements. The west façade was uncovered in 2016. The summit structure displays two parallel, corbeled arched chambers. The uppermost structure is accessed via an interior stairway and has a commanding view over the Mopan River Valley and on into Guatemala. On the west side of the Castillo, and about half-way up, is an adjoining terrace that houses a recently excavated temple structure, Structure A20. It contains multiple chambers and is accessed between two round columns. A patolli gameboard was found etched into the stucco floor of one of the chambers.

A south facing stairway leads down from the Castillo to a 114 square foot/35 square meter patio known as the South Patio. South of this patio is Group C.

Group C consists of two sub-groups. A group known as the Plazuela group is residential in nature and contains three structures, C5-C7. The larger sub-group is civic in nature and includes five larger structures; C1-4, and C8.

On the north side of Plaza A-I is Structure A1, and is centrally positioned between Plazas A-I and A-II. This structure is partially restored and rises up on four tiers with a central stairway on the north and south side. The base measures about 170 feet/54.5 meters x 119 feet/36.5 meters. The flat summit exhibits a low platform which may have held a structure of perishable materials. Built into the west side of this structure is the east side of Ball Court 2.

As mentioned earlier, the north side of Structure A1 faces onto Plaza A-II. The east side of this plaza features a small, square platform, Structure A14, which may have been a dance platform. It has some nice rounded corners and a plaza facing stairway. Between this structure and Structure A2 is a stairway that leads down and east along a sacbe known as the Northeast Walkway. This short sacbe terminates at a small structural group known as Chanca Patio. The west side of the plaza houses Structure A9 and the previously described panels, Panels 3 and 4.

The important Structure A9 is a partially restored mound that features a rectangular platform base. It initially had a height of 39 feet/12 meters. The panels previously mentioned were located along the east base of the platform stairway. Excavations into the interior of the mound have revealed one of the largest tombs located in Belize, and the only royal tomb so far encountered at the site. The chamber measures 7.8 feet/2.4 meters x 14.7 feet/4.5 meters. The skeleton was an adult male 20-30 years of age. The grave goods consisted of 36 ceramic vessels, a jade necklace and 14 obsidian blades. The remains of either a jaguar or deer were also located within the tomb. A secondary burial was located at the summit of the structure and reported by Gann in 1925.

Archaeologists have determined that Structure A9 and the crypt were completed at the same time. This could indicate that the structure might be a funerary monument dedicated to the individual interred within. It has been speculated that the individual was a casualty of the Naranjo/Caracol conflict, and that the panels were set along the base in his honor.

Two plain stelae, Stela 9 and Stela 4, are located in front of Structure A9. Two caches have been excavated beneath the stelae containing obsidian and chert eccentric flints.

On the north side of Plaza A-II is a large, square platform base housing several structures that ring a courtyard plaza, Plaza A-III, and is considered the administrative/civic center of the site. Structure A13 is located on the south side of the courtyard plaza. It is a linear structure about 223 feet/67 meters in length divided into two parallel sides housing more than a dozen chambers. The structure is accessed from Plaza A-II by a broad stairway that rises up two tiers. A burial of a high-ranking individual was located here. A central passageway then leads through the structure and into Plaza A-III.

Plaza A-III features three structures in addition to Structure A-13. The east and west sides of the plaza are enclosed by unrestored mounds. The north side of the Plaza A-III is taken up by a pyramidal structure, Structure A11. A central stairway rises up several steps to a series of ruined chambers. A small, secondary stairway then leads up to the summit which features a structure with a front, rear, and two side chambers.

Returning to Structure A6, El Castillo, there are two sacbeob that enter Plaza A-I on its northside from both the East and the West. The west sabe, Sacbe 2, runs about 521 feet/160 meters west along the south side of Ball Court 1, and to Structure A21, before it turns north and on to Group B.

The main ball court, Ball Court 1, is located to the west of the A-I plaza behind and connected to, Structure A7. This structural group is typical of the design, and features open end zones. The ball court’s west structure borders on a small plaza known as the Lost Plaza.

Group B is a residential section in a partially excavated condition. This group contains 9 small structures.

The sacbe that leads out to the east from Plaza A-I, Sacbe 1, continues for around 521 feet/160 meters, about the same as Sacbe 2, before it turns south to Group D. Group D is set around a raised plaza. At the northeast corner of the plaza is Structure D7. This is a palace type structure, and served as an elite residence. It features a wide stairway on its north side that led to a structure displaying three linear entrances that opened into several chambers.

The main structure, Structure D6, is a pyramid located on the east side of the plaza set upon a large platform base. The structure is crowned by two chambers believed to be temple sanctuaries. A number of burials were located within the temples.​