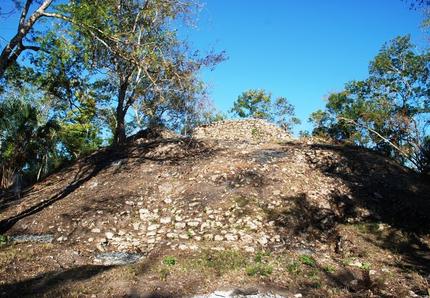 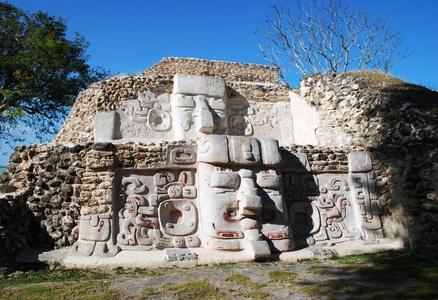 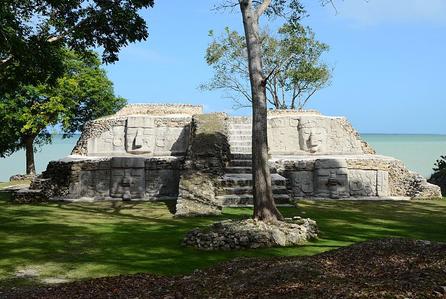 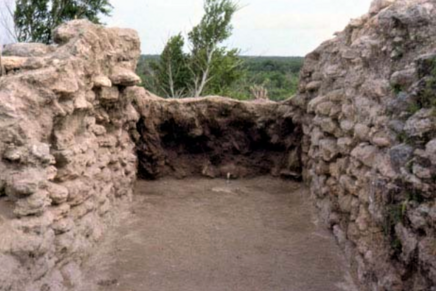 DESCRIPTION
​Cerros is a Late Pre-Classic (300 B.C.-250 A.D.) archaeological zone located on the tip of a peninsular where the mouth of the New River and Chetumal Bay meet. This geographical location afforded it a very favorable position to become an important trade center for the exchange of goods and ideas between the interior cities of Lamanai and the Peten, and around the Yucatan coast.

The central core of Cerros had a system of raised fields for agriculture, and was separated from the peninsular by a man-made canal. The ceremonial and civic center was located within this separated area. This area contained pyramids, temples, platforms, and two ball courts. Most of the structures date from the Late Pre-Classic, and were never built over which is a rarity in the Maya World. The residential area was situated on both sides of the canal. The archaeological park covers about 52 acres/21 hectares.

Cerros is located in the north of Belize across the bay from Corozal Town. It is easily reached from Orange Walk, Belize City or Belmopan from the south, or from the north by way of Chetumal, Mexico. Once in Corozal Town the trip to the site can be made by looping around the bay by road, or by hiring a tourist boat to take you across the bay. There is no regularly scheduled boat service. Check with one of the hotels or resorts for an organized tour or private passage.

HISTORY AND EXPLORATION
Cerros (mountain in Spanish) has a settlement history that is similar to, and perhaps connected to, the great Pre-Classic site of El Mirador in the Peten, Guatemala. Its beginning extends back into the Early Pre-Classic (1000-800 B.C.). By 50 B.C. the first monumental structures appear, and an early system of kingship is apparent. There is evidence of trade goods such as jade and obsidian. coming in from the Guatemalan Highlands and El Salvador, as well as material from the Peten.

With the collapse of El Mirador and its trade network at the end of the Late Pre-Classic, the fortunes of Cerros also declined. The city was virtually abandoned around 150 A.D., though some activity persisted into the Early Classic (250-600 A.D). There was a brief reoccupation of the site at the end of the Late Classic (600-900 A.D). No stelae or other glyphic inscriptions have been discovered at the site to identify any of its ancient rulers, economic and political relationships, or its original name.

The site was first reported on by Thomas Gann in 1900, though no investigation was attempted.  Peter Schmidt and Joseph Palacio made the first investigations in 1969. There followed excavations and restoration by David Freidel in 1974. In the 1990’s further investigations were conducted by Debra Walker. The Institute of Archaeology carefully covered the deity masks, and recreated the ones seen today.

STRUCTURES
The site consists of several defined plaza groups, numerous smaller courtyard groups, and individual structures of both a residential or ceremonial/civic nature. The majority of structures at Cerros date from the Late Pre-Classic with the first structures dating to about 50 B.C. These are centered around four plazas that reflect three distinct construction phases.

The earliest plaza, here called Plaza A, is situated closest to the bay, and is a low platform housing four structures set on an axis roughly 5 degrees east of north. The largest is Structure 5C-2, also known as Temple 1. This structure is also the most important at the site, and is located literally on the edge of the water. Bay erosion has adversely affected the rear portion of the structure. It is a three-tiered, truncated pyramid which at one time supported a temple made of perishable materials.

Flanking the south facing, central stairway of Temple 1 is four huge, stucco masks, stacked two above the other. They have been identified as deities from the Maya pantheon representing different aspects of the Sun and Venus, along with the Hero Twins, Hunaphu and Xbalanque. This motif style has some similarities at other sites such as Lamanai, Kohunlich, Acanceh, and Uaxactun.

The next building phase occurred just south of Plaza A, and was formed around a raised plaza, here called Plaza B. The plaza is set on the same axis as Structure 5C-2, and supports two, small structures on the south side of the plaza, and a multi-structural group, the Structure 6 group, set on the north side of the plaza. The Structure 6 group is set on its own pyramidal base and houses eight structures. This group was possibly constructed under the direction of Ruler 2. The main structure of the group is Temple 2, also known as Structure 6b. It has a south facing central stairway, and reaches a height of 53 feet/16 meters. A burial cache was discovered beneath the temple containing relics of Ruler 1. On the east side of Plaza B is the rear of the Structure 4 group which faces onto its own plaza, here named Plaza C.

Plaza C is ringed by 5 structures and is presumed to have been completed around the same time as Plaza B. The Structure 4 group is on the west side of the plaza, and consists of a pyramidal platform housing three structures set in a triadic arrangement. Structure 4b is the largest, being a temple/pyramid with a central stairway. It is the highest structure at Cerros, reaching a commanding height of 72 feet/22 meters. The temple was composed of a single chamber, and exhibited a masonry, corbeled roof. The Structure 4 group has a very different orientation however. It is set on an East/West axis with the central stairway leading down to the plaza, and facing the rising Sun.

On the southwest corner of Plaza C is the rear of the Structure 3 group. This structure group faces south onto its own plaza, here called Plaza D. It is set on a North/South axis with a south facing staircase, and appears to be somewhat similar to the Structure 6b group having a triadic grouping. There are two small structures on the south side of the plaza, and one on the west side. What is interesting to note about this group is that the axis of orientation appears to have shifted again, this time to about 2 degrees west of North.

The next major construction took place about 978 feet/300 meters southeast of Plaza D. This truncated pyramidal structure, Structure 29, rose on a two-tiered platform and was crowned at its summit with three temples set in a triadic arrangement. The central temple faces west and was decorated with carved jaguar heads, and may have been connected with warfare symbolism. The two flanking temples were decorated with long-nosed deity masks. It is set on an East/West axis with the central stairway of the main pyramid facing West.

The principal ball court is located at the southern end of the civic/ceremonial center along the canal. The sunken playing field is flanked by low structures with platforms at each end, forming a group known as Structure 50. Between the ball court and Plaza D are numerous minor structures, some residential, some civic, most of which have not been restored, along with a second ballcourt, Structure 61. This ballcourt has a raised playing field, and open-ended “end zones”. 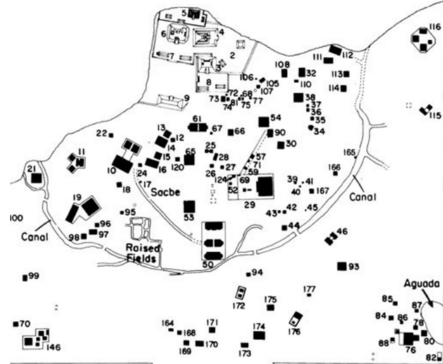 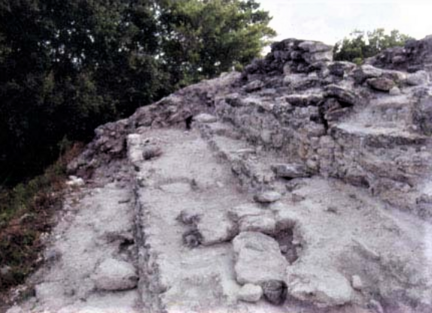 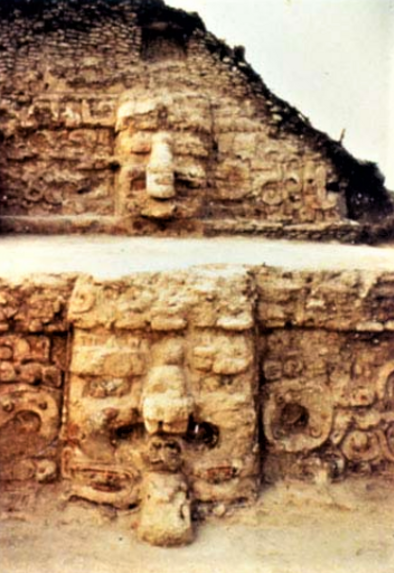 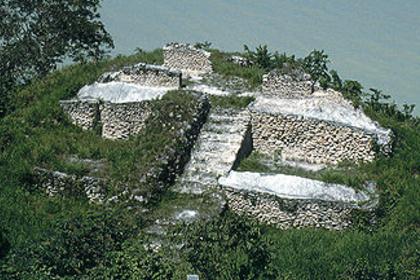 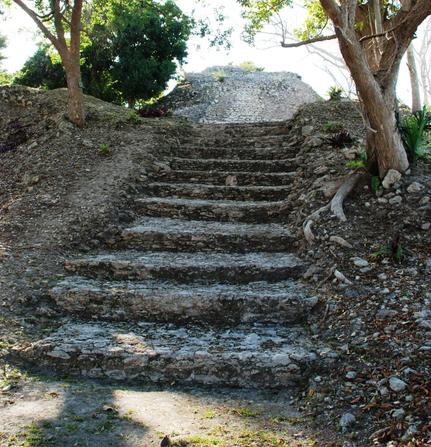 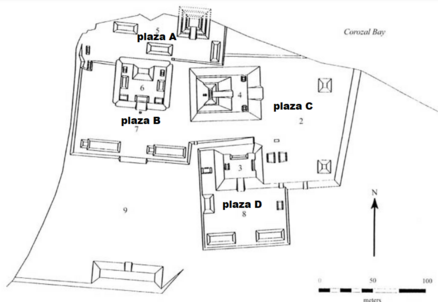