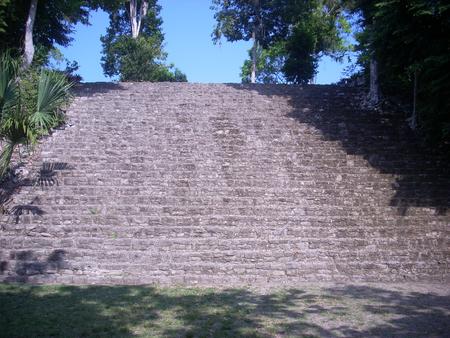 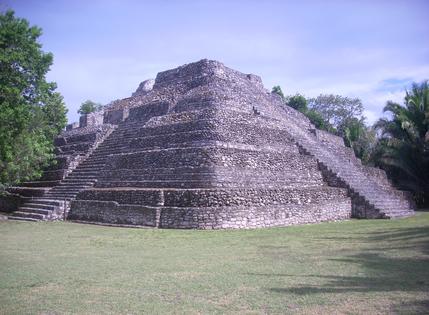 DESCRIPTION
Chacchoben, Place of the Red Corn in Yucatec Maya, is a nicely restored archaeological zone. The graceful curved lines of the pyramids are a notable feature here, an aspect of Peten style architecture. It was a regional center that had probable associations with Dzibanche, and other smaller nearby sites. The site is set along a SE/NW axis. Three plazas have been excavated and restored. It was only opened to the public in 2002.

Chacchoben’s occupation dates from the Late Pre-Classic (300 B.C- 200 A.D.) through the Terminal Classic (900-1100 A.D.). It shows later architectural influences of both the Chenes and Rio Bec styles attributed to its extensive trade networks with those areas.

The site is not as easy to locate as it might seem. The site is south of Felipe Carrillo Puerto on Highway 307 towards Chetumal. The path of least resistance is to take Highway 307 further south through the towns of Limones and Pedro Antonio Santos. Take Highway 293 north towards Chunhuhub/Merida, the turnoff just 1.5 miles/2.4 kms beyond Pedro Antonio Santos. The ruins entrance is about 5.3 miles/8.5 kms on the left hand side.

HISTORY AND EXPLORATION
Ceramic evidence points to settlement activity in the Late Pre-Classic era. Monumental architecture began in the Early Classic (200-600 A.D.) and continued into the Late Classic (600-900 A.D.). The two stelae that have been recovered with hieroglyphic characters are, sadly, too worn to help in identifying its rulers and political/economic relationships with other sites.

Though the site was known to the local inhabitants, it was not rediscovered by archaeologists until 1972 by Dr. Peter Harrison. Major excavations and restorations were undertaken by INAH in the 1990’s.

STRUCTURES
There are three excavated groups situated around a rather large (445 x 445 ft/136 x 136 meter) plaza, The Grand Plaza. The first complex one encounters when entering the site is known as Plaza B, or the West Plaza. Temple 24 is the largest structure, and focal point of this plaza. Its construction dates from the Early Classic (200 -600 A.D.) This majestic, graceful pyramid rises off a platform base 5 tiers with an unrestored temple atop, and reaches a height of about 36 feet/12 meters.  There are stairways on all four sides of the pyramid; two to the top and two that reach the fourth level. Smaller stairways lead from the fourth level to the summit which contains a number of roofless rooms. In front of the pyramid the plaza is flanked by several structures on the north and south sides and which backs onto the Grand Plaza.

Adjacent to the Grand Plaza on its southeast side is a series of platforms grouped around an elongated “U” shaped plaza, and known as the Road Group. There are remains of some small structures on a number of the long, low, stepped platforms. These are thought to have been civic/residential structures, and date from the Late Classic (600-900 A.D).

Further to the east from the Temple 24 Plaza, and through the heavily forested Grand Plaza, is the Acropolis Plaza. This group of structures is set upon a massive platform terrace about 16 feet/5 meters high, with a base of approx. 265 x 265 ft/81 x 81 meters, and dates mainly from the Early Classic. It is truly mind-numbing to envision and calculate the enormous amount of labor and fill needed to just construct this one platform terrace. The platform terrace is accessed via two interspaced, wide stairways facing onto the Grand Plaza. Temple 1 is a beautifully restored pyramid raised on its own base atop the Acropolis platform. It then rises to a height of 42 feet/14 meters. It is crowned with 2 small unrestored structures. It has a single grand stairway that faces back across the plaza terrace. At the foot of the pyramid is a small, two-tiered, multi-room structure with a single stairway. A broken stela (carved stone monument) is found here.

On the base level of the Acropolis terrace is the Temple of the Vessels. This is a pyramidal structure with a single, broad stairway. It is located on the northeast corner and faces Temple 1. The rear of the pyramid is covered with a thatched shelter to preserve a portion of the original 1,200 year old, red stucco finish that still adheres to the pyramid surface. It always amazes to find original stucco finishes and stucco artwork in as harsh an environment as in the sub-tropical jungles of the Maya area.

Adjacent to the Temple of the Vessels are two structures known as The Twins. These are small structures of similar design that form the northwest corner of the Acropolis terrace. There are other mounds throughout the site area that await excavation and restoration.

In the nearby town of Limones is a lone pyramidal structure by the side of Highway 307 which may have been an extended part of Chacchoben (it is 5.29 miles/8.5kms to the NE). It is on private property, and a recent fence prohibits closer inspection of this structure. It is a nicely restored 4-tiered pyramid with a single west facing stairway. There is a small temple structure which crowns its summit. Look for it on the east side of the highway at the southern edge of town. 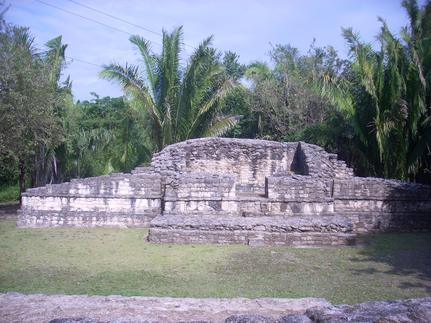 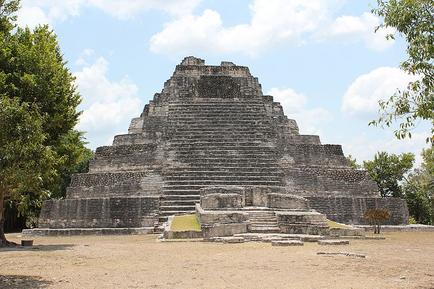 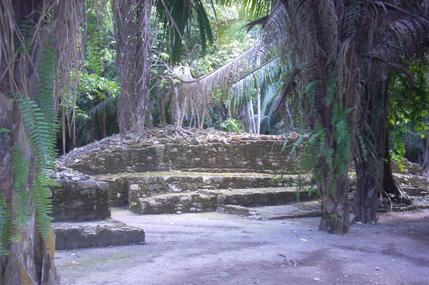 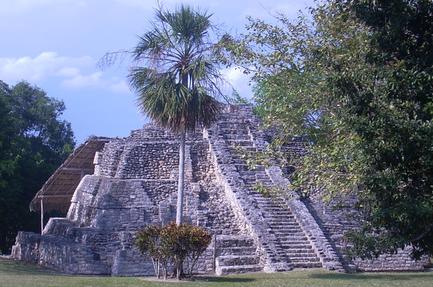 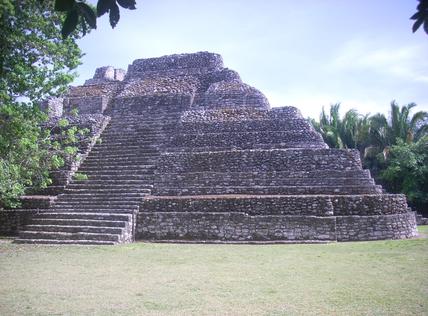 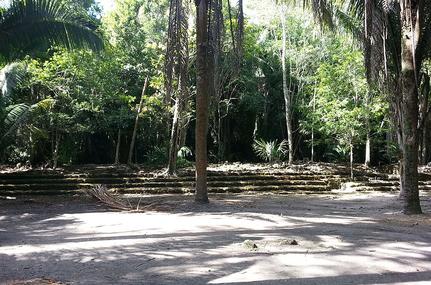 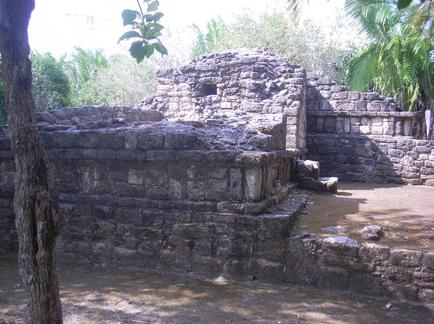 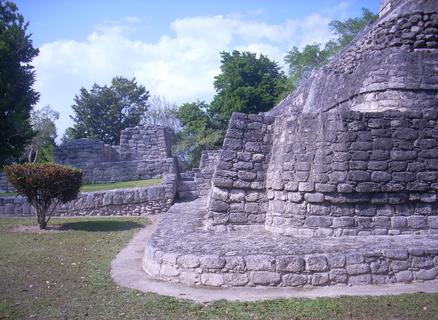 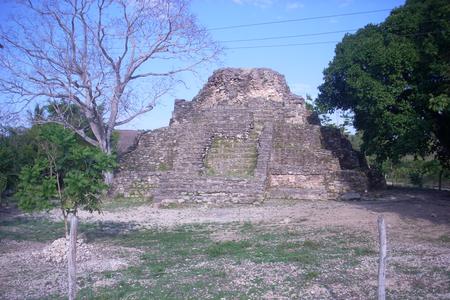 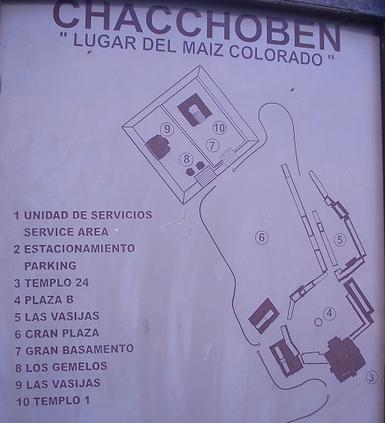