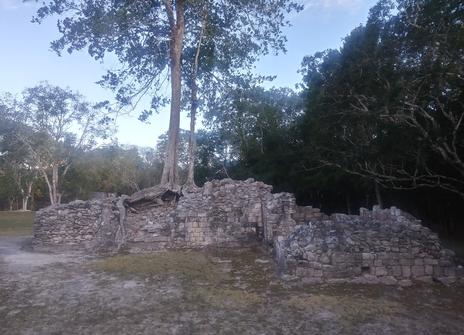 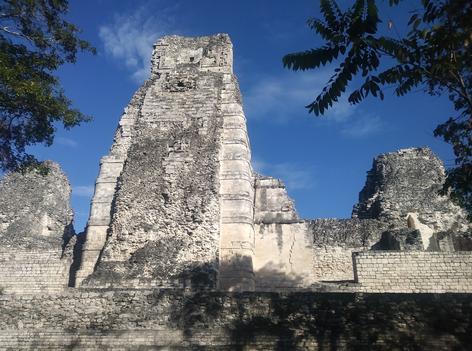 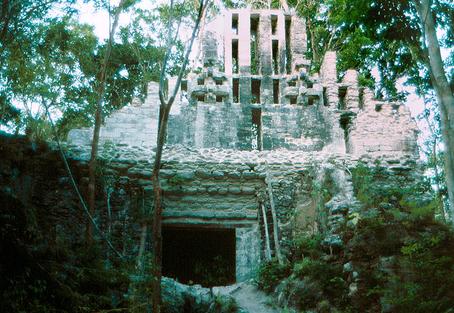 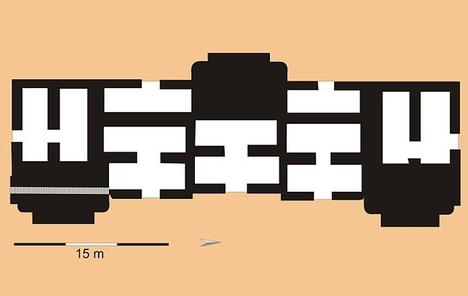 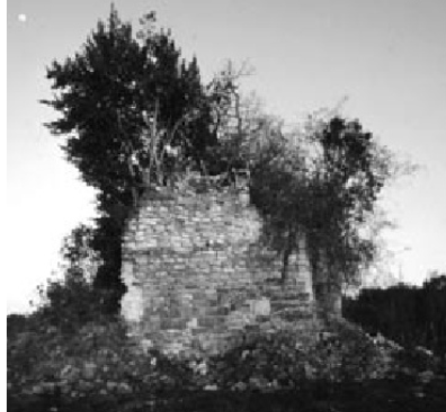 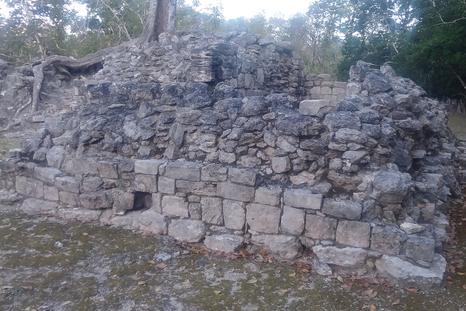 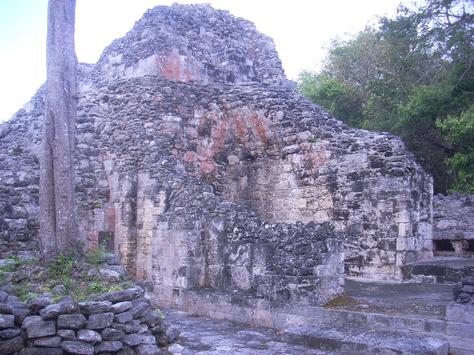 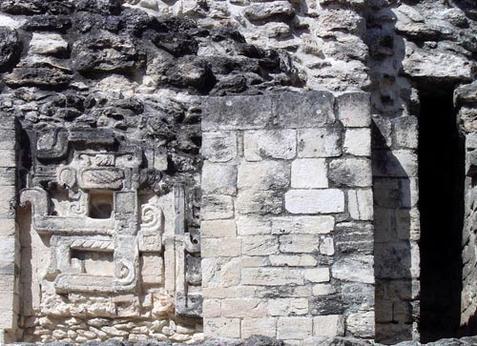 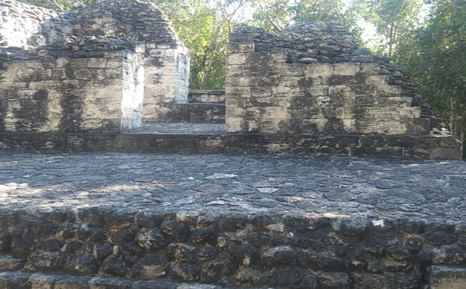 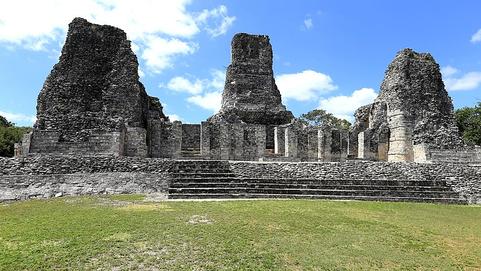 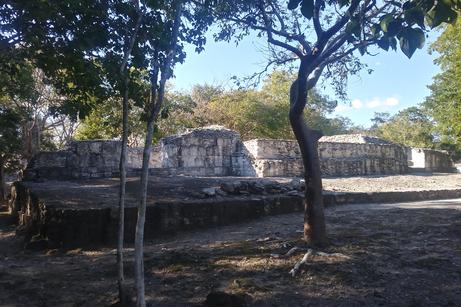 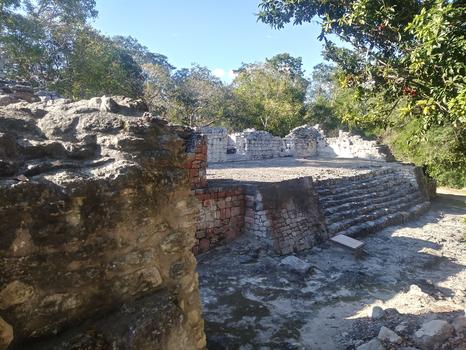 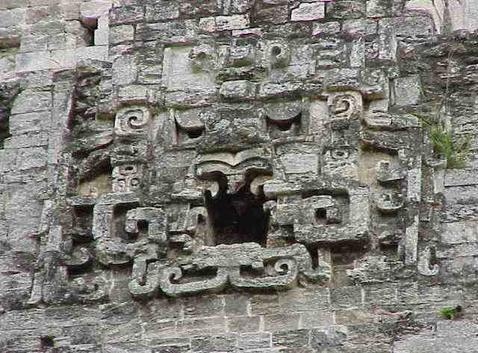 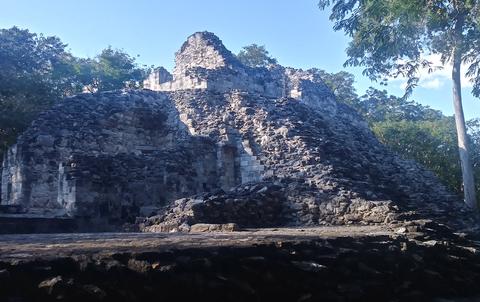 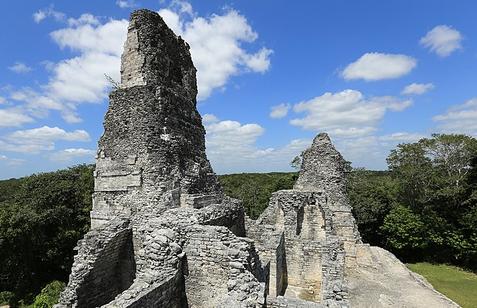 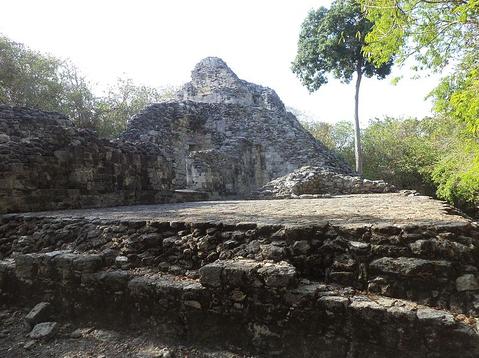 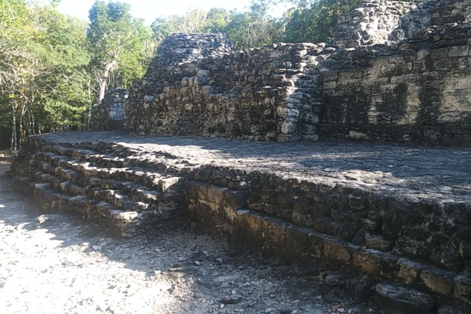 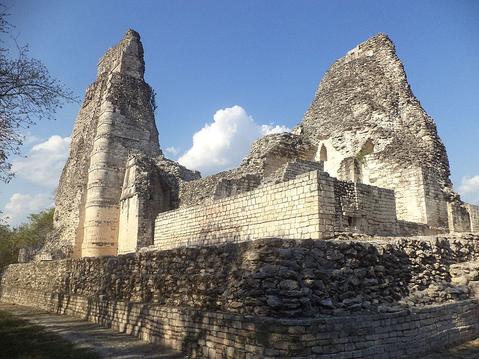 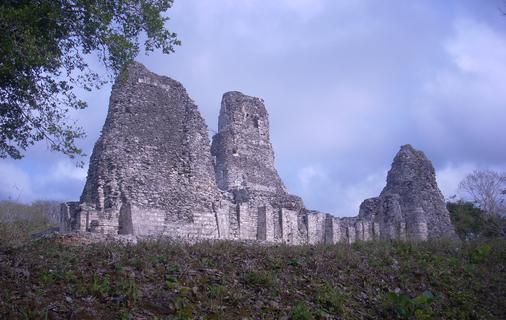 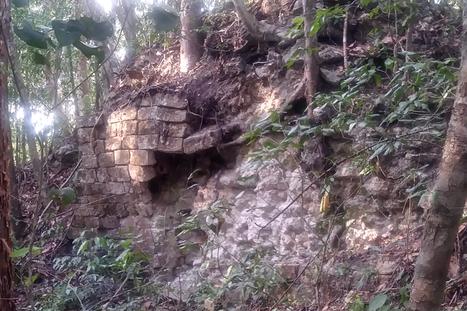 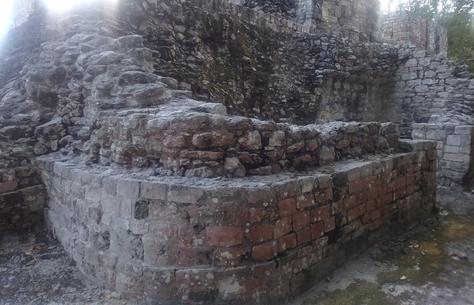 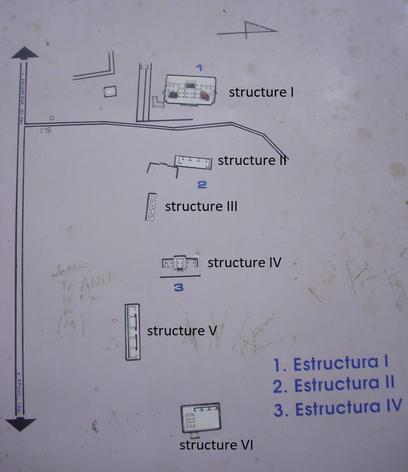 DESCRIPTION
Xpuhil is an impressive, Late Classic Maya (600 A.D.-900 A.D.) site. Its name means cat’s tail in Yucatek Maya after a plant that is prevalent in the area. The original name is unknown.

Xpuhil is within a zone characterized by the Rio Bec style of architecture. This style of architecture consists of structures featuring faux temple towers with steep, non-functioning stairways and doors. The structures are made with a high quality of stone carving forming mosaic decorations such as serpents in profile and checkerboard tablets, of both high and low relief. The towers exhibit nice rounded corners. It is thought that this design was a possible attempt to mimic the structures found at Tikal. Nearby sites include Becan, Rio Bec, Xpuhil, and Chicanna.

Xpuhil consists of 5 main groups of which Group I, the largest, is the only one open to the public. The site encompasses roughly 2 sq miles /5 sq kms. It has an east/west orientation, and can be found alongside the Escarcega-Chetumal Highway 186, .4 miles/.64 kms west of the town of Xpujil. The town itself rest upon a number of smaller groups, most of which have been built over and destroyed. The other main groups are located within a few miles/kms south of town off Highway 269, with one group located to the northeast of Group I.

HISTORY AND EXPLORATION
Xpuhil had its beginnings during the Early Classic (250 A.D.-600 A.D.). It reached its apogee during the Late Classic, when most of the monumental structures seen today were constructed, and continued on into the Terminal Classic (900-1100 A.D.) before being abandoned. There have been no stelae or glyphic inscriptions discovered so far to identify its rulers or political relationships with other sites. It is thought, however, that Xpuhil was contemporaneous with the other Rio Bec sites mentioned previously, and had close associations with them.

Xpuhil was rediscovered in 1938 by John Denison and Karl Ruppert of the Carnegie Institution. Tatiana Proskouriakoff made a detailed reconstruction drawing of Structure I in 1943. There followed David Potter and Jack Eaton in the 1970’s. INAH began investigations and restoration work in the 1970’s, first with Roman Pina Chan, then by Augustin Pena, and Ricardo Bueno. More recently Vicente Suárez Aguilar has carried out research, conservation and archaeological salvage work in groups 3 and 20, located within the urban area and outskirts of Xpujil.

STRUCTURES
The most important, and grandest structure at Xpuhil, is Structure I located at the far west end of the site. This impressive building is set upon a long, low platform measuring 167 feet/51 meters by 88 feet/27 meters. It sits at the west end of a large plaza with Structure II on the east end.

Structure I is unusual in that it contains three towers as opposed to the two tower structures seen at other Rio Bec sites. However, in the Chenes zone to the north at Dzibilnocac, Structure I there also has three towers, showing a possible diffusion of architectural concepts between the different zones.

The structure has twelve chambers, ten of which are arranged into two room suites, and are situated around the four sides. A broad, east facing central stairway, about 74 feet/22 m, rises up from a raised plaza onto a small terrace. Three of the two room suites face onto the terrace. All once had corbeled vaults, now mostly ruined. A small stairway leads up into each chamber.

Behind the chambers is a central, multi-tiered temple-tower that rises up to a height of about 58 feet/18 meters. A single, faux temple crowns the summit. Steep unusable stairways lead up on both the east and west sides. While in a somewhat degraded condition, an intact mosaic monster mask and some fine mosaic stone decoration are visible on the west side, with this being the best preserved of the three towers. A decorative roof comb once graced the temple.

At each end of the platform is a high temple-tower. The east facing faux stairways once contained three mosaic monster masks. The summit is occupied by a temple which at one time exhibited elaborate mosaic decoration surrounding the solid doorways. Interior stairways can still be navigated within the south temple-tower. A highly decorative roof comb once completed the structure. Today both of these temple-towers are in a poor state of preservation, though some details are still observed.  Even so, upon first observing them they are inspiring.

On the north side of the structure, at the plaza level, are the remains of a small, central stairway flanked by two chambers. A west facing stairway about 34 feet/10 m in width leads up to the plaza terrace.

A small structure lies at the southeast corner of Structure I. This structure appears to have had two-to-four chambers though it is in a poor state of preservation with only low walls remaining to denote its existence.

The site is entered from the INAH kiosk located at the east end of the site. Structure VI is located on the north side of the main path, in an inaccessible area, and cannot be reported on at this time. An overgrown mound, Structure V, is the first encountered on the south side of the path. It features a long, low platform on an east/west axis that once contained several chambers. While some standing architecture is still evident, it is in an overgrown condition.

Structure IV is next and is oriented on a north/south axis.  A platform about 74 feet/22 meters in length supports a central pyramid which reaches a nice height of around 49 feet/15 meters. A central, east facing stairway leads up from a terrace to the summit of the pyramid. The summit contains a double row of vaulted chambers that opened onto either the north or south side.

On either side of the pyramid, at the platform level, are found two-chambered suites, each accessed by a single entryway and showing the remains of corbeled vaults. Benches line the walls and incorporate small drum decorations. These open up onto a small north facing terrace. The structure was remodeled over time, including the stairway and the north side chambers.

Structure III is situated upon a raised, elongated platform, on an east/west axis, and is composed of two, two-chambered suites. They were roofed by now destroyed corbeled vaults. Each of the chambers contained benches, and this structure was considered a residence for high-ranking individuals. The chambers face north across a narrow terrace down onto a ground level plaza. A raised, central masonry construction lies between the two chambers.

The west side of the plaza is taken up by Structure II. This structural group consists of two separate structures, here called Structures IIA and IIB. They adjoin each other atop a shared platform on a north/south alignment. The principal structure, Structure IIA, lies on the north side of the platform and features a broad, central stairway that leads up to a terrace. Six chambers face onto the terrace, and were once roofed by corbeled vaults. Benches are seen in each chamber which would identify this structure as an elite residence.

Separated by a narrow passageway to the south is the second structure of the group, Structure IIB. This structure has chambers on either end, with a central, two-tiered masonry platform that may at one time have held structures of a perishable nature. An interesting feature here is that both structures appear to face to the east, away from Structure I, and not onto the Structure I plaza.  The same could be said of Structure IV, as it too faces east away from Structures II and III.

As mentioned previously, there are a number of groups, both large and small, that come under the Xpuhil heading. Some are named by Roman numerals (I-XVII), and others by place names such as Xpuhil Kitam, Xpuhil Cuartel (located within an army barracks), and Xpuhil Aserradero.

A report by Karl Herbert Mayer from 2010 provides some information on the Xpuhil Aserradero Group. It is located about 1 mile/1.6 kms south of the town of Xpujil. The main structure here, Structure I, is composed of two or more chambers with the partial remains of a corbeled vault. It has a rectangular plan oriented on an east/west axis. The probable remains of a stairway are found on the south side. Other low mounds make up the remainder of the group.

Xpuhil, Group I, is easily reached, and with the other Rio Bec sites close by, as well as, the fabulous site of Calakmul, it’s well worth a few days visit using the town of Xpujil as a base. 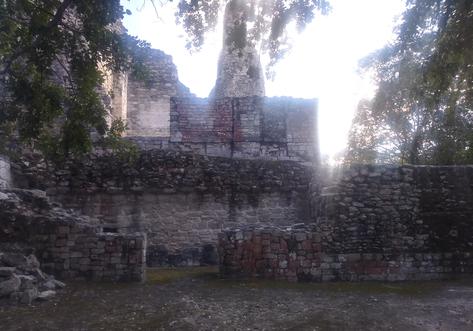 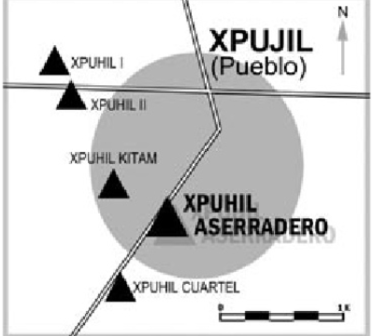