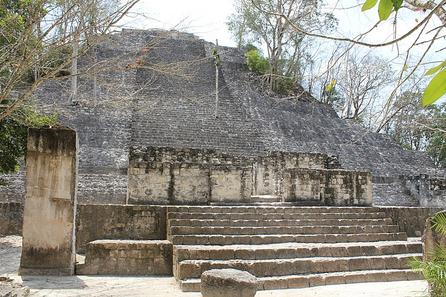 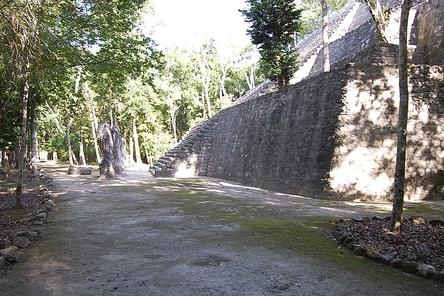 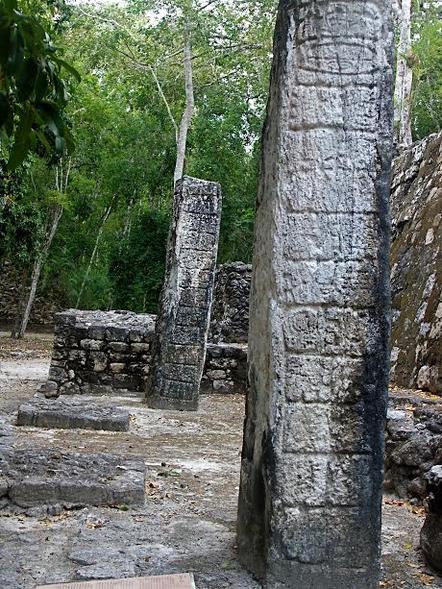 DESCRIPTION
Calakmul, Two Adjacent Mounds in Yucatek Maya, was the capital of the Snake (Kan) Kingdom, and is the largest of the Rio Bec architectural style sites, as well as, a UNESCO World Heritage Site. It has the highest pyramid in the Maya world, and contains the greatest number of stelae (commemorative carved stone slab markers), found at any site (120). Discovered under a late period temple are some of the most stunning murals ever seen in the Maya world. There are at least eight Sacbe (white stone roads) that have been identified in the archeological zone.

Located deep in the Calakmul Biosphere Reserve about 22 miles/35 kms from the Guatemala border, Calakmul was built atop a small natural plateau surrounded by a savannah. Water was provided by a series of canals and aguades.  It was one of the largest and most powerful city-states in the Maya world with an estimated population of over 50,000, and political control of over a million inhabitants.

The site covers about 7 sq. miles/112 sq. kms and contains over 6,000 structures, though the core area is much smaller. It is located off the Chetumal-Campeche Highway 186, outside the town of Conhuas (km 95). From there it is a drive in of about 37 miles/60kms over a rough road.

Calakmul has a very well defined history. More than 20 kings have been identified covering a time span of over 400 years. Numerous stelae here and at other sites, as well as other original sources such as hieroglyphic stairways and ceramics, have recorded a time line of events such as royal births, accessions, deaths, marriages, alliances, conquests and defeats. A unique matched pairing of Kings and their wives appear among many of the stelae.

Calakmul, with its allies, was in constant conflict with the equally powerful site of Tikal and its allies. Its influence, or vengeance, was felt as far away as Copan in Honduras, then an ally of Tikal.  Many parallels could be drawn regarding the history of Europe, and the contemporary East/West cold war. It was a life or death struggle, with death being the operative word here.

Calakmul was first settled in the Middle Pre Classic (700-350 B.C.), and by the Late Pre Classic (350 B.C.-200 A.D) was already an important city. It reached its height during the Late Classic (600-900 A.D) before suffering defeat at the hands of a resurgent Tikal and losing its importance as a major power. It continued with a diminished population and status into the Post Classic (1000-1450 A.D.). It is closely associated with the site of Dzibanche which some researchers believe was the first capital of the Snake Kingdom.

The site of Calakmul was only brought to the attention of scholars by botanist Cyrus Lundell in 1931, and reported on by Sylvanus Morley in 1932.  There followed Ruppert and Denison in 1943. More recent investigations and restorations have been carried out by Carrasco Vargas and Colon Gonzales in 2005, and Rodriguez Campero in 2008. Excavation and consolidation of structures continues.

​
By far the most impressive structure at Calakmul is its massive pyramid/temple known as Structure II. It is situated on the south side of the plaza. This structure was built-over and enlarged a number of times over the course of several centuries to reach its final height of around 150 feet/50 meters, the highest and largest structure in the Maya world. Its base measures over 400 feet/130 meters in circumference.

Structure II contains several sub-structures; some recently excavated and open to the public. Nine royal tombs have been found within the pyramid, some containing rich funerary offerings including jade masks. One of these belonged to an important king, Yuknoom Yich'aak K'ahk, also known as Jaguar/Fire Claw, who ruled 685-695 A.D. His grave goods are now housed in the Museum of Maya Archaeology, Campeche. An immense stairway leads to the top in a series of tiers. In front of the pyramid are a number of Stelae dating from the early eighth century.

Located on the west side of the plaza is Structure VI; Structure VII on the north; and Structure IV on the east. Structures IV and VI are thought to have had an astronomical function, marking the equinox and solstices, and form a paring that is termed an “E Group”.

Structure VII is a temple/pyramid complex originally constructed in the Peten style that rises to a height of 69 feet/23 meters. It has a broad stairway leading to a three chambered temple at the top. Here was found an eighth century tomb of one of Calakmul’s kings, Yuknoom Took K'awiil, containing a fabulous jade mask. Other jade, shell ornaments and ceramic objects were discovered as well.

North of the Central Plaza is a complex known as the Chiik Nahb Acropolis, “Place of the Water Lilly”. This complex is famous for its startling murals recently discovered within one of its structures. This temple consisted of 5 sub-structures reflecting a building period covering hundreds of years. During excavations brilliant murals were discovered on the stucco outer walls of sub-structure 4. These murals are unique in the Maya world as they depict not royalty or warfare, but nobles and commoners engaged in social rituals. There are a number of defaced Stelae located on one of the broad stairways.

To the south of the Central/Great Plaza is a single building, Structure I. It is the second highest pyramid within the site reaching a height of 130 feet/40 meters. The platform that supports the pyramid measures 328 feet/100 meters on each side. At its base are three altars representing the Three Hearth Stones often associated with the constellation Orion, and the birthplace of the gods. A broad stairway measuring 59 feet/18 meters in width, and once flanked by large stucco masks, leads to a small temple at the top. A royal tomb containing a jade mask was unearthed within this structure.

To the northeast of Structure I is located Structure III. It is considered a elite residence containing 12 chambers. Its architectural style suggests a date of 370-400 A.D. Excavations have uncovered a rich assortment of grave goods including 3 jade masks.

To the west of the Great Plaza is the West Group, or Great Acropolis. This is a huge complex with multiple structures, including a ball court, temples, and residential areas. A fine carving of seven kneeling prisoners has been discovered on a natural limestone outcrop. It has since been reburied to preserve it.

Structure XIII is located north of the ball court. It is a four-tiered pyramid platform that reaches a height of 26 feet/8 meters. The platform base has a length of 141 feet/43 meters. A central stairway leads up to a two story structure atop the pyramid summit. A number of stelae are located here and place the date of the structure in the 8th century.

Structure XV contains three tombs of high ranking personages. One of them has been identified as the wife of Yuknoom Cheen who ruled from 600-686 A.D. She was the mother of the previously mentioned Jaguar/Fire Claw. The tomb contained  a rich assortment of funerary goods.

A defensive wall has been excavated on the north side of the Great Acropolis, revealing the tense times that faced the city. Some of the other structures associated with this group remain to be excavated and studied.

To the east of the Central/Grand Plaza is the small Acropolis. To the north of this complex is a residential group called Chan Chi'ich

Calakmul is an impressive site which will take many years to fully excavate..Without doubt, many new discoveries await the archaeologists trowel. 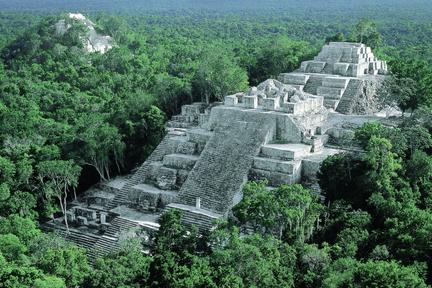 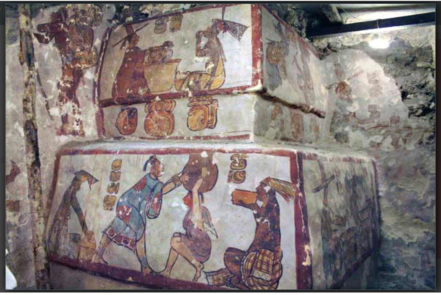 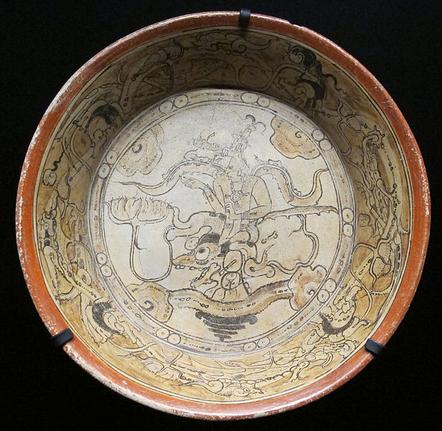 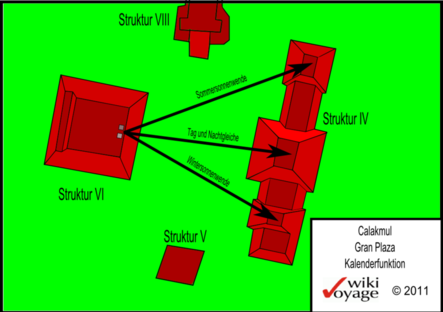 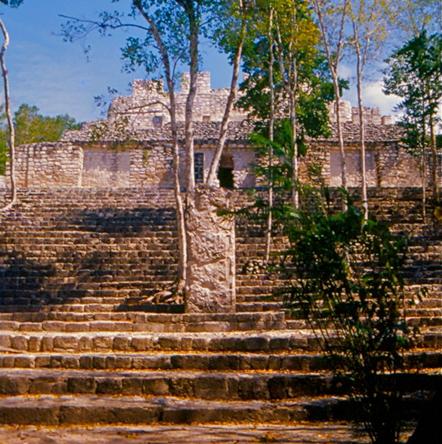 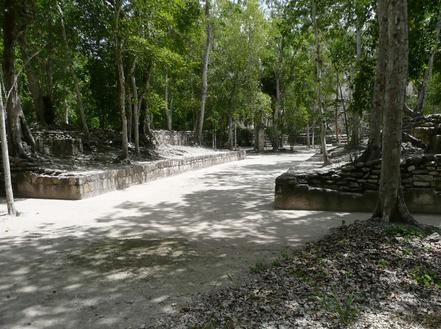 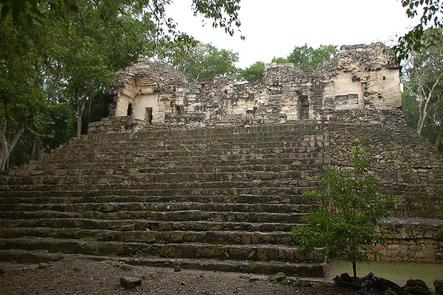 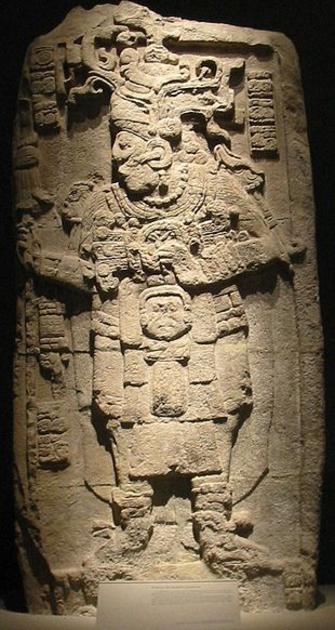 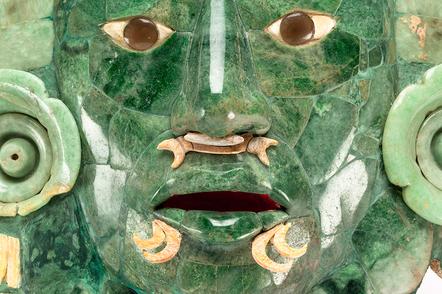 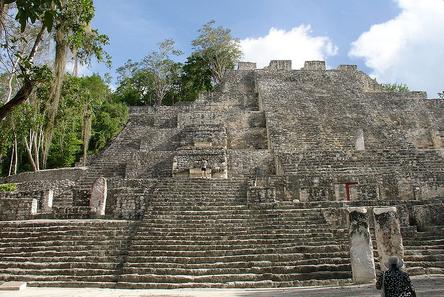 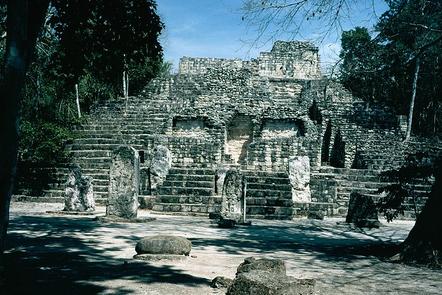 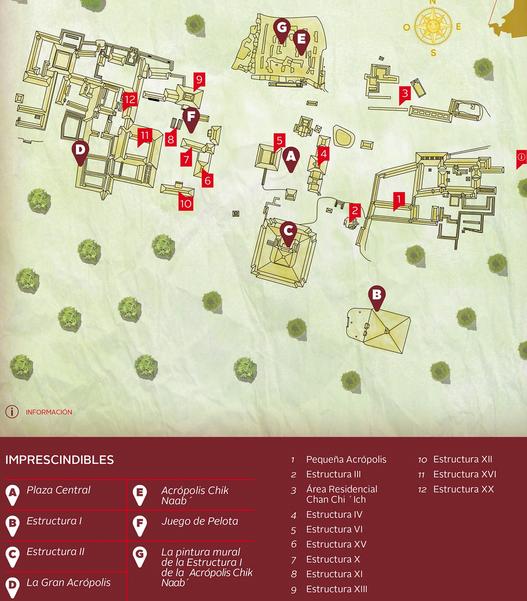