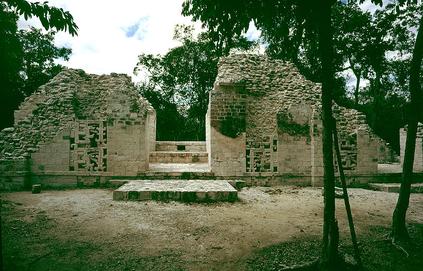 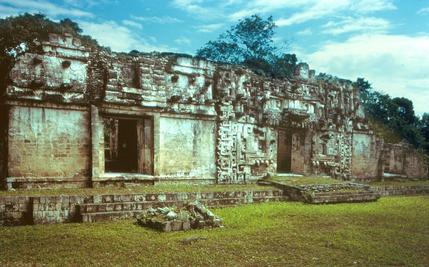 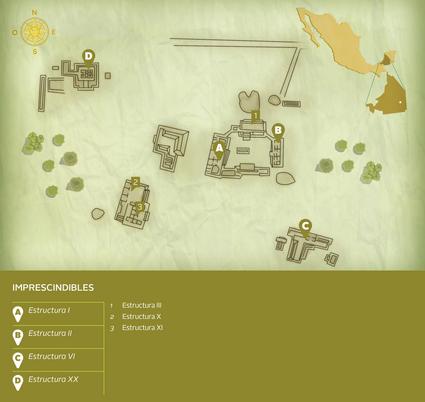 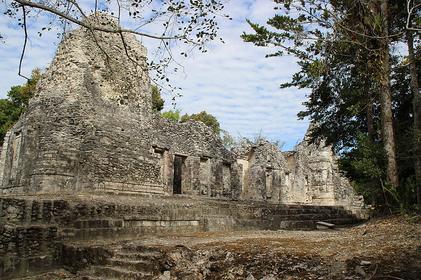 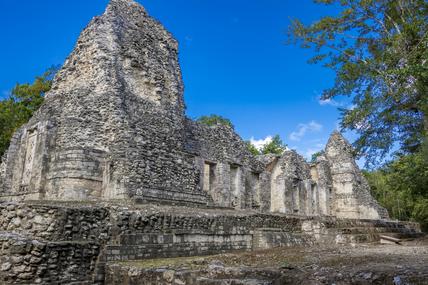 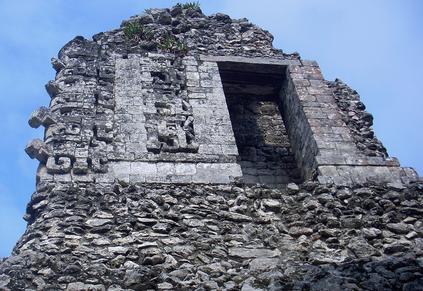 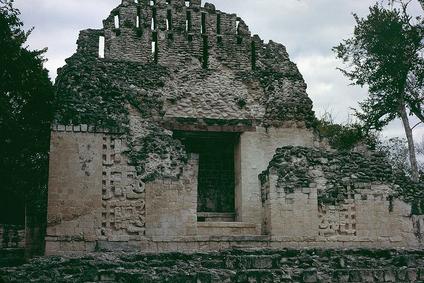 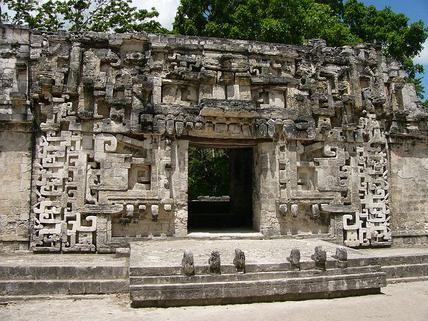 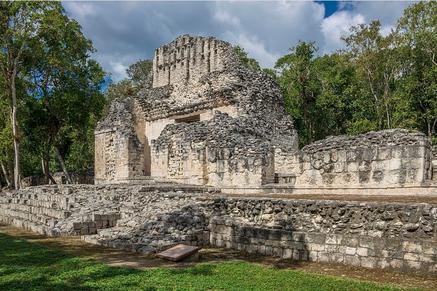 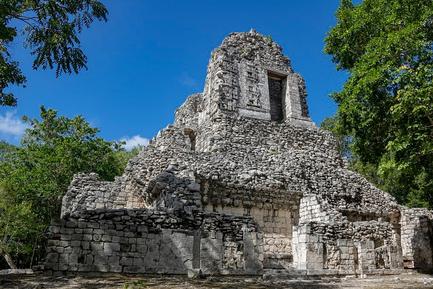 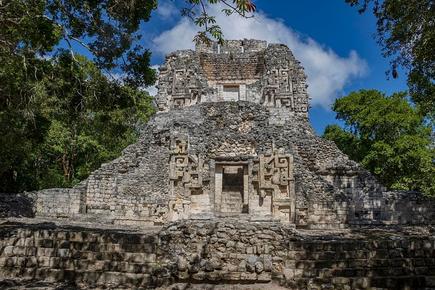 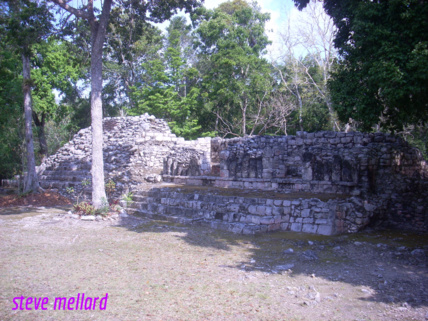 DESCRIPTION
Chicanna, “House of the Mouth of the Serpent”, is a small archaeological zone considered to have been a center for the surrounding regions elite. It is thought to have been dependent on the nearby site of Becan. There is a range of architectural styles that includes Puuc and Chenes, though most of the standing structures exhibit strong Rio Bec influence. The site is known for a very impressive temple containing a large doorway framed by the gaping mouth of a giant earth deity. Other nearby sites include Becan, Xpuhil, Rio Bec and Balam Ku.

The site is located south off Highway 186, about 80 miles/126 kms west from Chetumal, about 5 miles/8 km west from the town of Xpujil, and a short distance from Becan.

HISTORY AND EXPLORATIONS
​The earliest habitation extends back to about 100 CE. Masonry structures appeared in the Late Preclassic (350-250 CE) and the site reached its height in the Late Classic Period (600-900 CE).  The site is within 1.8 miles/3 km of Becan and was likely a satellite settlement of that regional capital. Like other sites in the area, Chicanna began a gradual decline and was abandoned by the end of the Terminal Classic (900-1100 CE). In the course of excavation, five painted capstones were recovered featuring figures and glyphs. When this report comes to light the details will be reported here.

The site was rediscovered in 1966 by Jack Eaton. It is very likely that Chicanna corresponds to a site identified earlier by Raul Pavon Abreu sometime between 1950-60. Restorations commenced in 1970 under the direction of Tulane University and the National Geographic Society. There followed several other projects and researchers including Augustin Pena Castillo (1979), Roman Pina Chan (1983), Ricardo Bueno (1991-94), Antonio Benavides C, (1995), and Luz Evelia Campana (2000).

Structure I is located on the west side of the plaza. It consists of a long platform base with twin towers on its extreme ends exhibiting a Rio Bec style of architecture. Ruined stairways lead up to faux temples. Intricate stone mosaic designs are profusely displayed on the exterior of this as well as most of the other structures. The structure contains ten chambers, eight of which face on opposite sides of the platform.

Structure II is on the east side of the plaza and was built in the mid-eighth century. The impressive entrance to this temple is encircled by an intricate stone mosaic of Itzamna, the supreme earth deity. The floor resembles the lower jaw with stone fangs set up in front of the entryway with the upper jaw above. One passes through the jaws of this deity to enter the temple. The temple consists of eight rooms and was once crowned with a roof comb. Partial glyphic inscriptions have been discovered here painted on interior walls. A similar structure was recently revealed at the rediscovered site of Lagunita (August 2014) located to the northwest. Another exists at the nearby site of Hormiguero, and one is also seen at the northern Yucatan site of Ek Balam.

Southeast of the Central Group is Group B, and houses Structures VI, VII and IX. Structure VI is a south facing linear structure located on the north side of the plaza, and is built atop a low platform. It contains a central and side stairway which leads to a series of chambers. The façade consists of a series of mosaic masks stacked one above the other. The top of the structure still features the remains of a decorative roof comb. Structures VII and IX have yet to be fully excavated and restored.

Located to the southwest of the Central Plaza is Group C, whose structures include Structures X-XIII arranged around two courtyards. Structure XI is a small palace consisting of twelve rooms, and is considered to be among the earliest structures at the site. This group may have been an elite residential area.

Group D is located about .25 miles/.4 km northwest from the Central group. Its most important structure is that of the two-story Structure XX set upon a low platform that measures about 58.5 feet/18 meters per side. This is the highest structure at the site, and is situated on the north side of a small plaza. The first floor of this two-level structure has eleven chambers interspersed around the structures four sides with an additional chamber attached to its west side. The central chamber on the south side features an intricate zoomorphic mosaic portal. An interior staircase leads up through this chamber to the second level which has four rooms accessed through a second equally decorative portal. Beautiful, stacked Chaac masks grace the corners of the upper structure. Most of the lower-level chambers contain a stone bench decorated with two/three stucco medallions featuring a human face within a flower motif, unique in the Maya area, and reported on in detail in 1997 by Karl Herbert Mayer.

This is a fine site to visit and incorporate into a longer stay in the Rio Bec area. 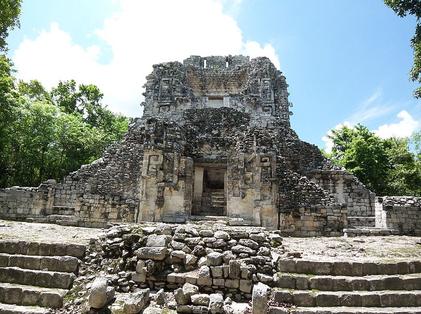 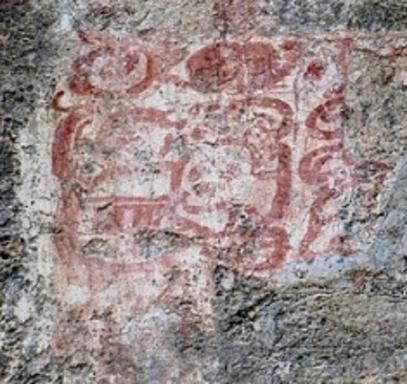 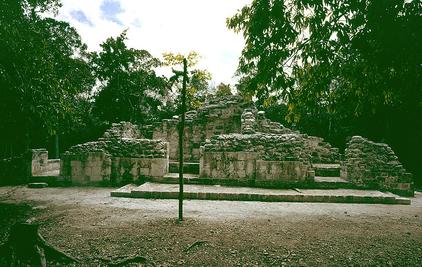 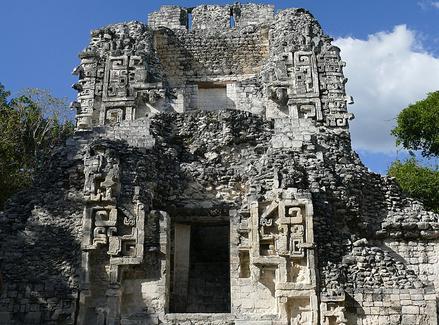