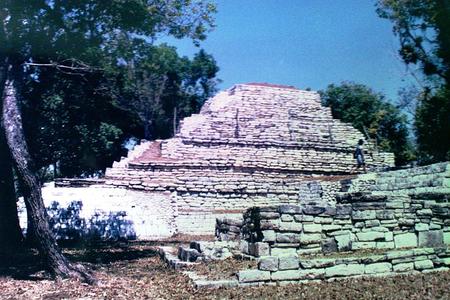 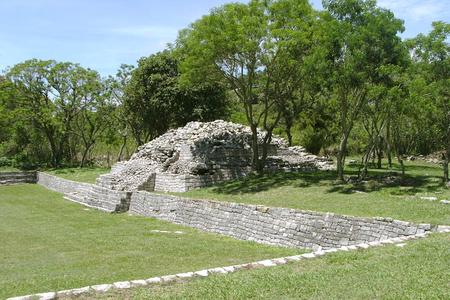 DESCRIPTION
Tenam Puente was an important regional site in the Eastern Chiapas Highlands that took advantage of the hilly geography that embraces the high Comitan Plain. Its strategic location allowed it to control the trade routes between the highlands, the Lacandon jungle, and the Gulf Coast. The site consists of over 60 structures that rise from the plateau floor up five successive terraces to the summit of leveled hilltops. The core area takes up about 75 acres/30 hectares.

The fact that there are three ballcourts located within the core area attests to the importance of the site. It is representative of one of the minority of sites that transitioned from the Late Classic (600-900 A.D.) into the Terminal Classic (900-1250 A.D.).

The site is most readily reached from Tuxtla Gutierrez on Federal Highway 190 that passes through San Cristobal de las Casas on to the town of Comitan. Once through Comitan continue on 190 and look for signage to Francisco Sarabia and the ruins. Located within the service kiosk is a small interpretative section with photos and a stela.

HISTORY AND EXPLORATION
Ceramic evidence indicates a Late Pre-Classic (300 B.C.-250 A.D.) occupation of the site. Masonry construction began in the Early Classic (250-600 A.D.), while most of the structures seen today date from the Late Classic. Modifications were carried on into the Terminal Classic with the site being abandoned around 1200 A.D. A stela has been recovered and has been dated by the noted researcher Frans Blom (1893-1963) to a katun ending date of October 9, 790 A.D. (9.18.0.0.0).

Recovered trade goods show a wide network ranging from the Chiapas and Guatemalan highlands to the Gulf Coast.

Tenam Puente was first reported on in 1928 by Frans Blom and Olivier la Farge. Further studies were carried out in the 1950’s by the New World Archaeological Foundation of Brigham Young, with excavations by the Maya Project in 1975, and Pierre Agrinier in 1976 and 1985. Current restoration and consolidation work has been undertaken by INAH.

STRUCTURES
The principal civic/ceremonial structures are located on a terraced hill and are positioned on an axis of about 45 degrees east of north. The structures were built into the sides of the hill and atop leveled terraces. On hills to the southwest various residential and minor temples are to be found. The limestone blocks used in construction are somewhat flat and rectangular, with no mortar being used. Stucco was applied to most of the structures, plazas, and stairs, some of it displaying modelled decoration.

There are three ballcourts associated with the site which indicates its importance as a regional capital. Other associated sites have only one ball court with the exception of Chinkultic which may have two.

The site is entered on its lowest level which is occupied by the main ballcourt, Ballcourt I. This ballcourt is set on a slightly different axis from the rest of the site about 28 degrees east of north. It measures about 162 feet/50 meters x 94 feet/29 meters and is the largest ballcourt at the site. On the south end of the ballcourt is a small temple structure that may have incorporated a steam bath.

Ballcourt I is flanked on the west and east sides by Plazas F and G. These plazas, while large, contain only small rubble mounds. At the north end of the ballcourt is a very broad and high sectional staircase that leads up to the second level, Plaza E.

Plaza E is a large space measuring about 423 feet/129 meters x 184 feet/56 meters and is dominated by Structure 29. Structure 29 is a fair-sized, three-tiered pyramid with two or more ruined chambers atop its summit. A central, north-facing stairway rises off of a low patio. A smooth stela which may have been painted at one time was found in front of the stairway.

At the north end of Plaza E another wide stairway leads up to a terraced plaza that has a small pyramid/temple and a ballcourt, Ballcourt II.  A small temple is located on the east side of the ballcourt. On the north side of the plaza is yet another grand stairway that leads up to Plaza B, and along with Plaza A, is termed the Acropolis.

Plaza B contains Structures 13 through 21. There are only two structures on the plaza floor itself. The rest ring the plaza on a leveled terrace built atop the summit of the hill. One of the plaza floor structures includes the southeast corner of Ballcourt III. The fact that these two ballcourts, Ballcourts II and III, are on upper levels and within semi-enclosed plazas indicates that the game played up here was more likely reserved for the elite, and may have had a more complex purpose.

The other structure on the plaza floor is Structure 21. This is a small pyramid/temple on the south end within which a rich burial was located. The individual was entombed within an urn which reveals a late date for the burial. An altar is located in front of the north facing stairs.

Structure 17 is the largest structure of Plaza B and is located on the north side. A set of stairs rises up to the leveled terrace. The structure itself then rises up several tiers and is crowned by two or more chambers. An altar/platform is located at the foot of the stairs on the plaza floor.

Structure 14 is located to the west of Structure 17. The terrace widens here into a small plaza. A set of stairs ascends to a multi-tiered, rectangular structure upon which are located three or four ruined chambers. Associated with this structure is an annual religious event wherein the inhabitants of nearby Francisco Sarabia make a pilgrimage to the site carrying an image of the Virgin Mary to be placed within.

The west side of the plaza contains Structures 13 and 13A. These are constructed atop the raised terrace, and are free-standing platforms with the remains of low foundation walls which may have incorporated structures of a perishable nature. Four small chambers are located below on the lower terrace stairway level. A central stairway leads to the chambers.

Plaza A is located to the west of Plaza B, and is therefore a bit more secluded. Two large structures are located here, namely Structures 7 and 4. Both of these are built atop the leveled summit of the hill, with the plaza floor itself on a lower terrace.

Structure 7 is a multi-tiered pyramid that rises to a height of about 55 feet/17 meters, and is located in the northwest corner of the plaza. A grand stairway descends all the way down to the plaza floor. It is the highest structure at the site. The flattened summit of the pyramid contains a single, rather narrow chamber.

Structure 4 is on the west side of the plaza and is accessed by a plaza stairway that leads up to the leveled summit of the hill. The structure is constructed atop the summit terrace. It is three-tiered, rectangular and houses a single, large chamber at the top. Stairways on all sides rise up from the summit terrace to the upper chamber.

The east side of Plaza A is anchored by a medium size structure, Structure 11. It is a one-story temple located on the plaza floor with a single entrance. A small altar is positioned between it and Structure 4. The south side of the plaza is open. Behind Structures 4 and 7 are several small platform mounds on the upper terrace plaza.

The last main group of structures lies just to the east of Plaza B, and forms Plaza D. The principal construction here is Structure 42, and holds down the north side of the plaza. It is a three-tiered platform having three separate structure/chambers on the upper portion. Three separate stairways are interspersed along its length which measures about 141 feet/43 meters. Each stairway leads up to a separate chamber.

The southwest corner of Plaza D is taken up by Structure 37. This is a raised platform with stairs on the north and east sides. A large pyramid mound occupies the northeast corner of the plaza, with a rubble mound located in the northwest corner.

This is a very interesting site, and should be combined with the nearby site of Chinkultic. 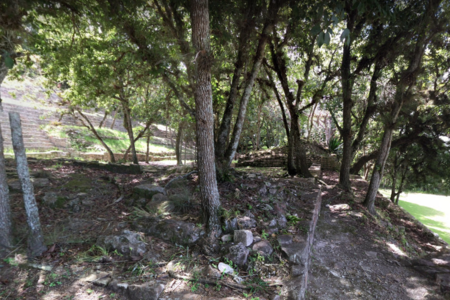 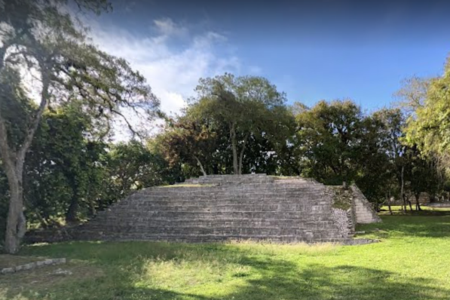 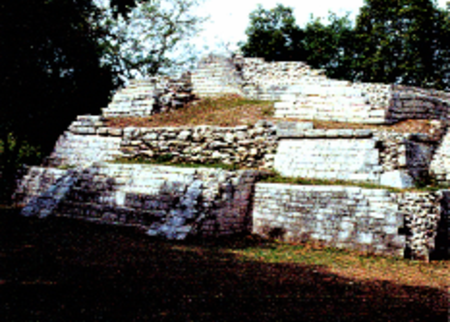 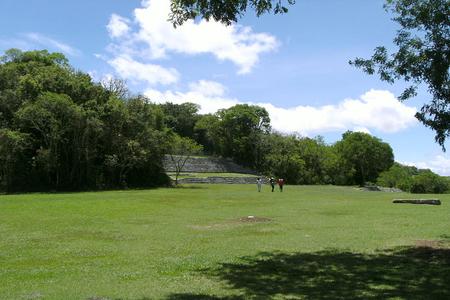 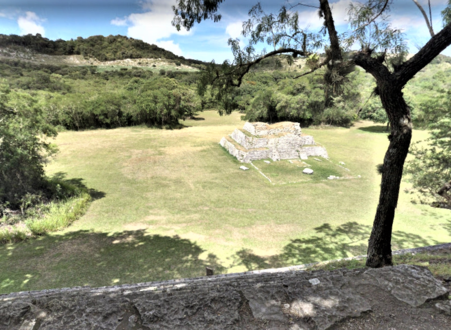 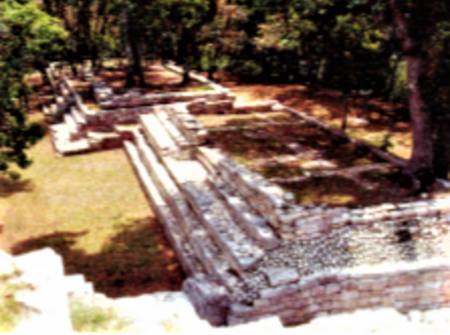 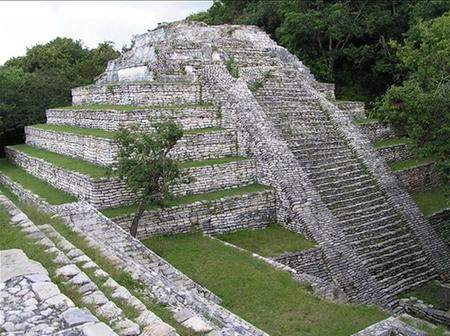 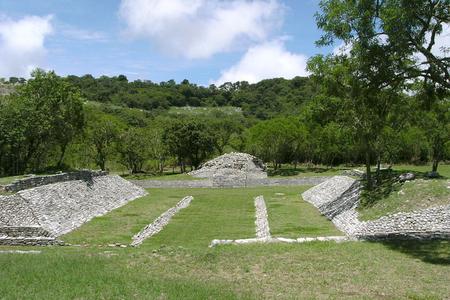 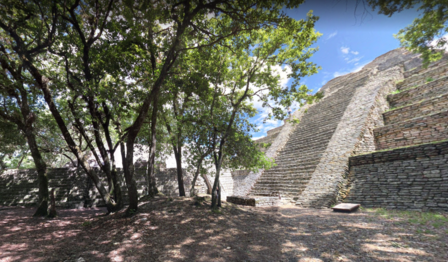 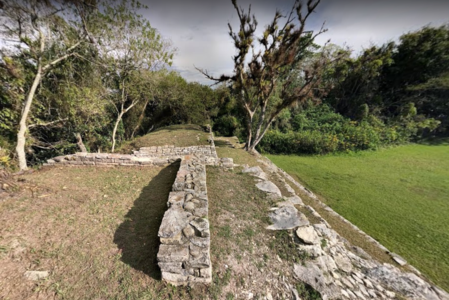 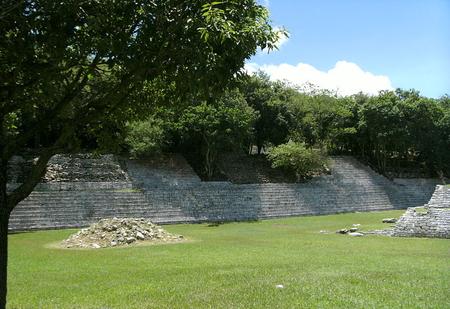 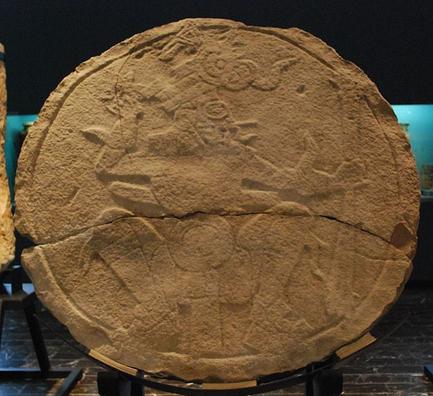 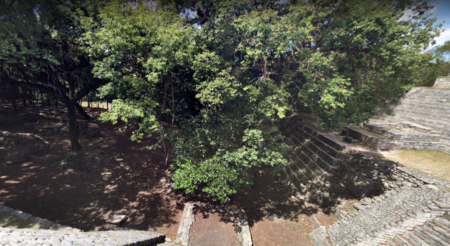 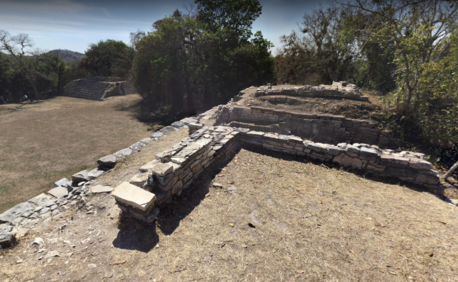 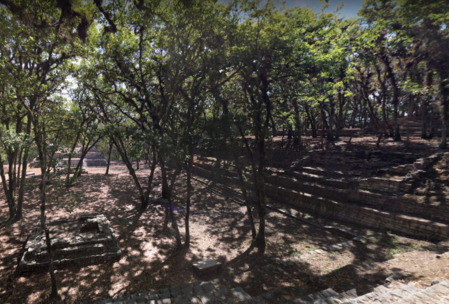 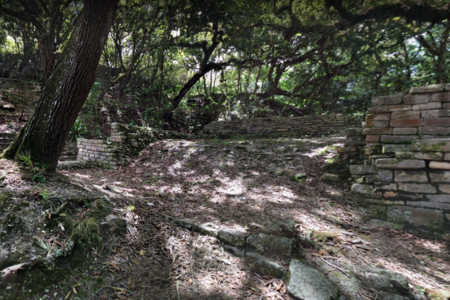 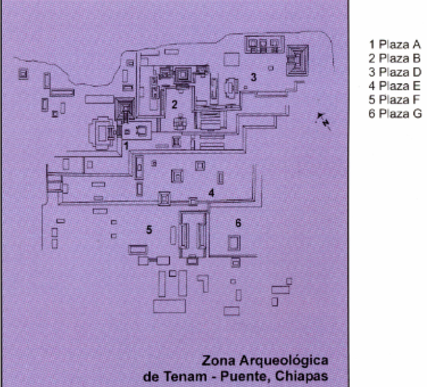 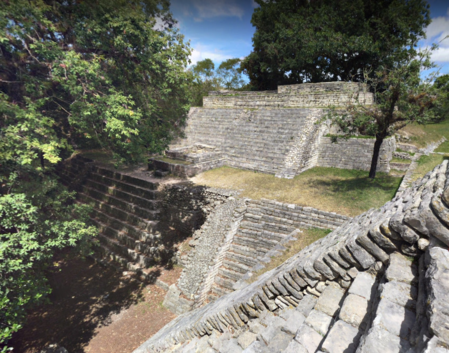 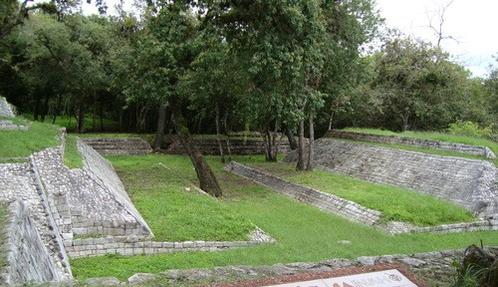 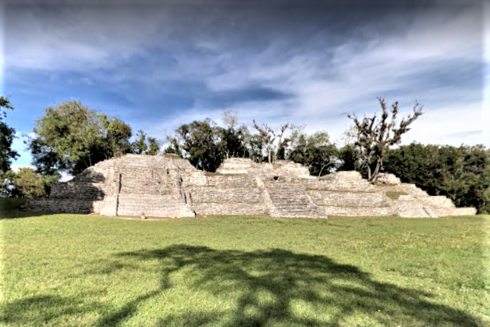 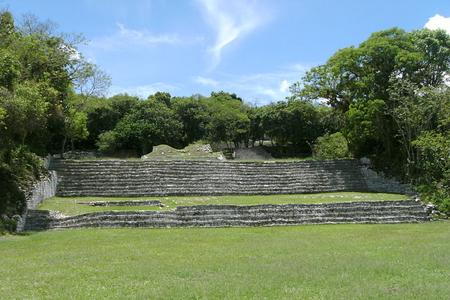 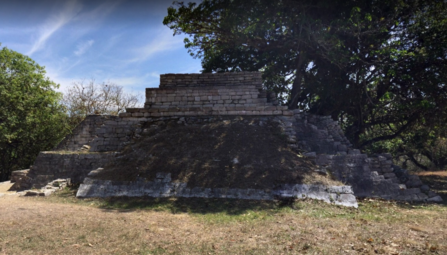 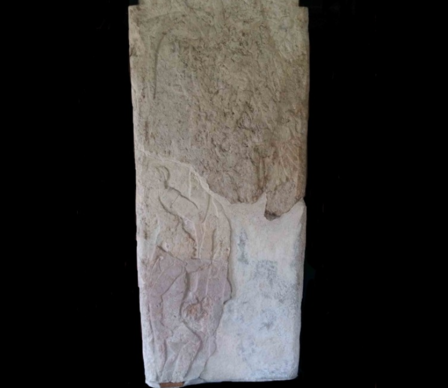