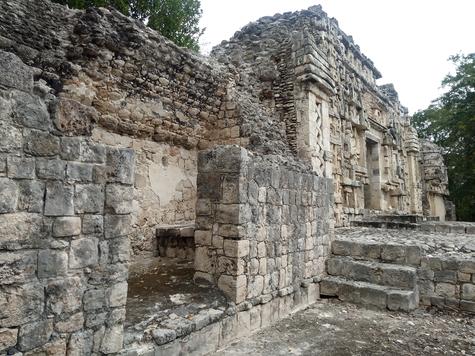 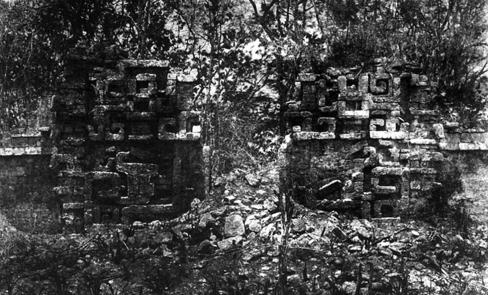 DESCRIPTION
Hochob, “corn cob storage area” in Yucatek Maya, is a Late Classic Period (600-900 A.D.) archaeological zone located in the Chenes region of Campeche State. The sites’ structures are situated around a single plaza atop the leveled summit of a hill. Residential areas were terraced into the hillside consisting of platforms with structures of perishable materials.

Aguadas/reservoirs have been located in the area that provided fresh water. The site is arranged on a northeast/southwest axis, about 32 degrees east of north.

The INAH service unit is located at the bottom of the hill. It is a steep, yet short climb up to the site.

The site is located southwest of the town of Dzibalchen. From Campeche take Highway 261 east through Hopelchen onto Highway 269 to Dzibalchen. Just before entering town, take a right fork towards Chencoh/Chenko. A side road leads east to the ruins before reaching town.

HISTORY AND EXPLORATION
Hochob was first settled around 400 B.C. according to the ceramic evidence recovered by archeologists. The site reached its greatest expansion between 600-900 A.D. when most of the structures seen today were built, especially the period between 850-1000 A.D. There have been no stelae recovered to identify the rulers or relationships with other sites, though it is thought that it was subordinate to nearby larger sites such as Dzibilnocac and Tabasqueno.

The site experienced the same general decline as other Maya lowland sites, and was largely abandoned by 1100 A.D. A remnant population carried on into the beginning of the Colonial Period (1525-1823 A.D.).

Hochob was first reported on by Teobert Maler, who visited the site in 1887. Next came Harry Pollock in 1936 followed by Ricardo Robina in the 1950’s. The first excavations and restorations were undertaken by Ramon Carrasco of INAH beginning in 1982.

STRUCTURES
The structures of Hochob are arranged around a main plaza oriented to the cardinal points, mostly on an east/west axis. Chultuns, water collection wells, are interspersed about the ruins.

The main structure here is known as Structure II and comprises three chambers. This highly ornamented structure is located on the north side of the plaza. It is an outstanding example of Chenes style decoration featuring an intricate and complex carved mosaic of the earth monster, Itzamna, surrounding the main entryway and covering most of the façade of the central chamber. The portion over the entryway containing the nose, fangs and other facial features has collapsed within the last hundred years leaving a blank space of rounded stone infill. The chamber is slightly recessed from the two adjacent rooms.

A protruding terrace reaches into the plaza. At the foot of the terrace are extended fangs of the Itzamna deity. One therefore steps up and enters the chamber through the gaping jaws of the crouching earth monster. This is a common Chenes feature and can be seen at other sites such as Hormiguero 71 miles/115 kms to the southeast. The edges of the central façade have stylized thatched dwellings that at one time were crowned with sculptured masks.

The remains of a roof comb can still be seen that crowns the central chamber. It is reported to have incorporated into its design a series of life size figures. No remains are evident today.

The central chamber is flanked by two chambers which extend slightly outwards. Only the east chamber has remains of its original façade. The vaulted roof of both structures has collapsed taking with it the decorations that once existed over the entryways. The outer corners have a series of hook-nosed, stacked Chac masks that has been described as creating a cascading waterfall effect. Photographs taken by the explorer Teobert Maler in 1887 reveal that a stylized mask once existed over the east chamber entryway since collapsed.

Adjoining Structure II on the west side is a pyramidal structure, now just an overgrown pile of rock. On some site plans it is referred to as Structure I. The INAH site plan shows it to have been of a significant size.

The east side of the plaza is anchored by Structure I. Again, on some site plans this structure is referred to as Structure III. This structure has three double chambers with similarities to that of Structure II. It is in a more degraded state than Structure II being totally roofless, yet still retains a portion of its monster mask entrance.  As with Structure II the adjoining chambers have stacked Chac masks at the corners. The difference here is that the masks begin at the bottom of the structure as opposed to being halfway up as is seen in Structure II. Unfortunately the Chac masks are crumbling away before ones' eyes. The chambers contain benches on the extreme ends with niches underneath.

Structure I also has a protruding terrace that still exhibits the lower fangs of the earth monster. Attached to the south side of the structure is a small two room structure, Structure IV.

The south side of the plaza is taken up by a lateral building containing Structures V and VI. This building has similarities to the better restored Structure A-1 at Dzibilnocac located not far away. Both ends contain a four-sided tower with only the east tower having two open entryways and two faux entryways. The west tower shows no entryways. Each has a plaza facing stairway, and rather plain walls with protrusions that extend out around the upper moldings. It has been suggested that they were perhaps used as bases to hold figures or other types of decoration. The southeast tower is the better preserved and exhibits a nice roof comb.

The central part of this structure is in a rather ruinous condition. There are three chambers entered by separate doorways. A small step leads into each chamber from the plaza. The vaulted roof has completely collapsed.

To the west of Structure VI are two ruined mounds of rubble with the west side of the plaza mostly open. A small platform/altar resides in the middle of the plaza. All in all, a very pleasing site. 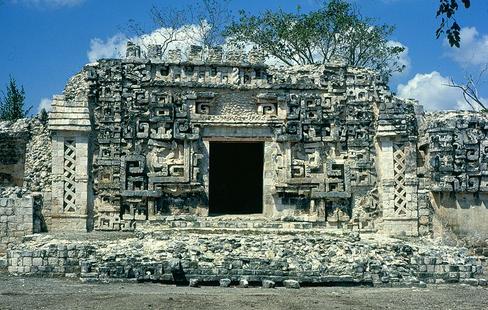 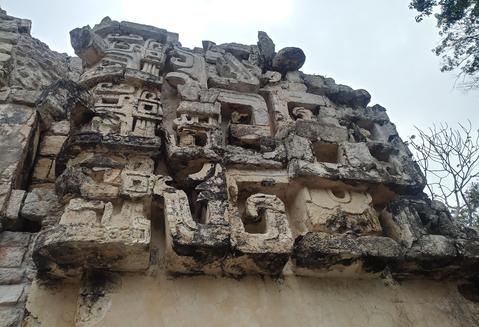 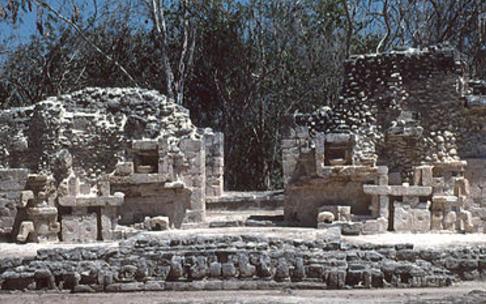 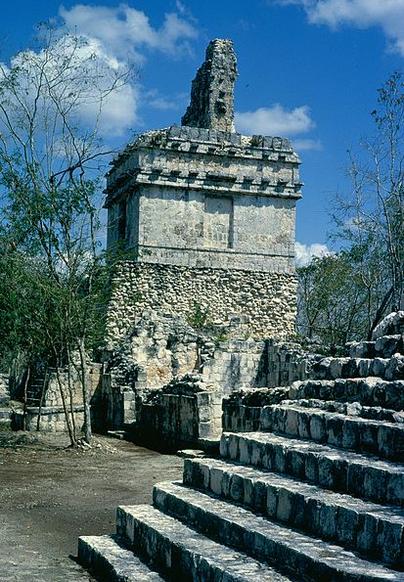 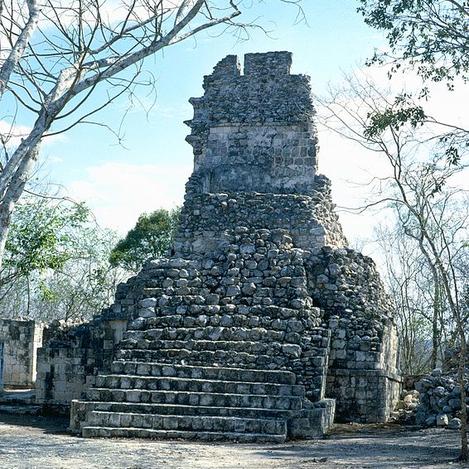 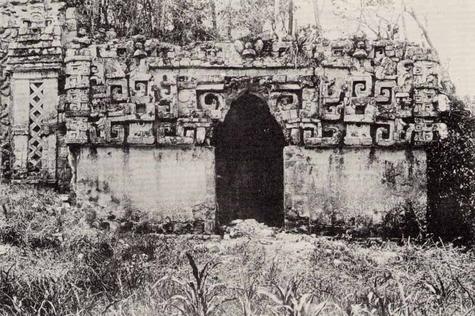 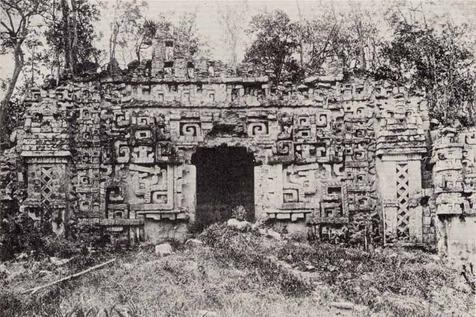 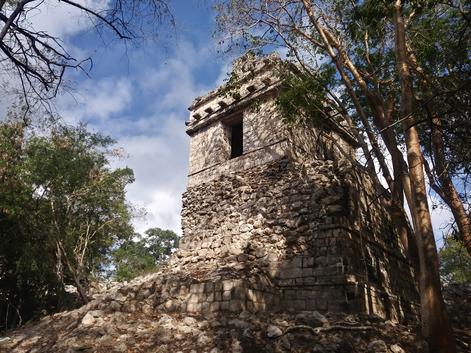 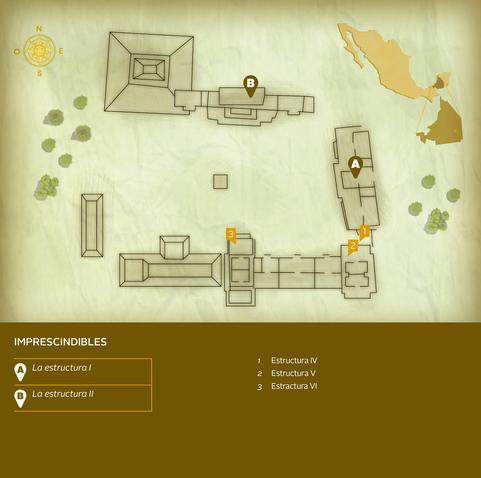 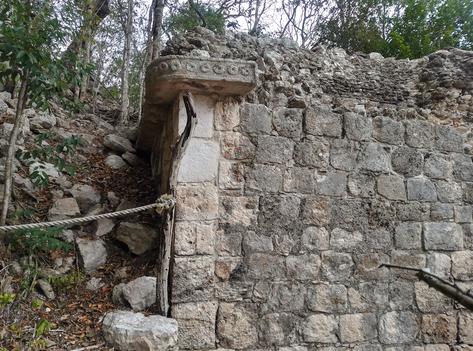