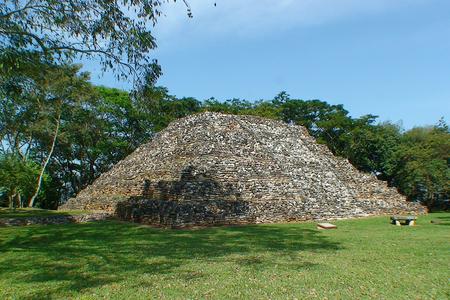 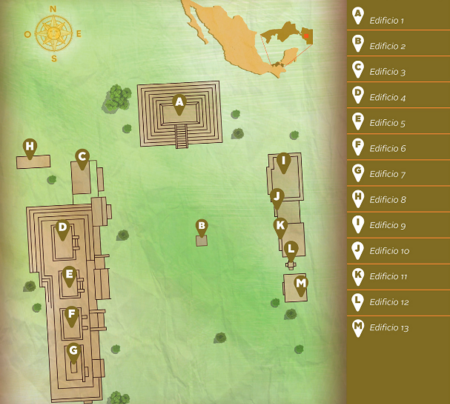 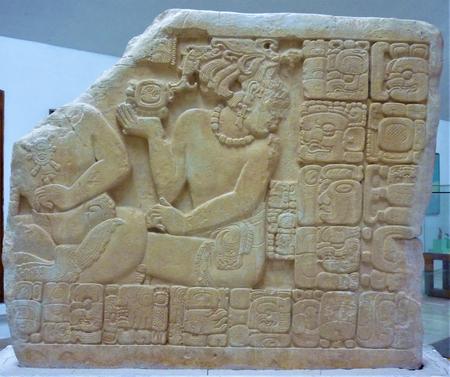 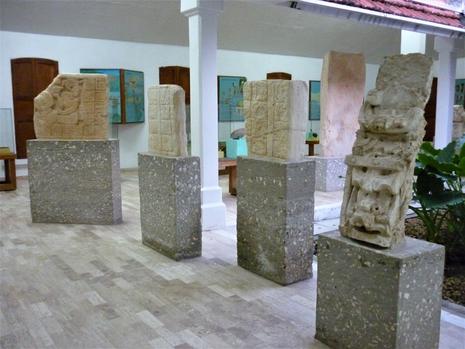 DESCRIPTION
Pomona is a mid-sized Mayan archaeological zone located at the lower foothills of the Northern Chiapas mountains. Its original hieroglyphic name has been identified through its emblem glyph as Pakbul. The site is on a tributary of the mighty Usumacinta River, which afforded it an ideal location to facilitate trade between the upper and lower regions of the river and across the coastal plain. It was a small kingdom in its own right with the larger kingdoms of Palenque to the west, and Piedras Negras to the south. The site reached its prominence during the late Classic (600-900 A.D.), and covers an area of about 469 acres/190 hectares.

Pomona is most easily reached from Villahermosa, about a two to three-hour drive. From Villahermosa take Highway 186 south to the Emiliano Zapata turnoff (Highway 203, about 83 miles/133 kms). Once through town continue south about 24 miles/35 kms to a turnoff east (good signage). After .5 mile/.8 km take a turnoff south about .75 mile/1.2 km to the site.

HISTORY AND EXPLORATION
Ceramic evidence points to an occupation of Pomona during the Late Pre-Classic (300 B.C.-250 A.D.) though no structures have been identified so far. Most of the structures at the site date to its heyday, 600-800 A.D. No clear timeframe has been established for the abandonment of the site, though it is speculated that the site experienced the same decline through endemic warfare as that seen in the Peten during the mid -9th century.

The Pomona kingdom held a strategic position with regards to trade routes between the Usumacinta River and the coastal plains, and was composed of several secondary settlements including Panhale, Boca del Cerro, and Chinikiha. It was in a constant struggle to maintain its independence between the competing kingdoms of Palenque and Piedras Negras.

Inscriptions at Palenque describe attacks by that city against Pomona in 659 and 663 A.D. In 751 A.D., an accession rite at Pomona was overseen by Kan Bahlam III, ruler of Palenque, suggesting its influence over that city. Pomona appears to have attacked Piedras Negras in the mid-sixth century. Piedras Negras Stela 12 relates that they returned the favor in 792 and 794 A.D. with the capture of Pomona’s king, Kuch Bahlam.

Pomona was first reported on by the indefatigable Teobert Maler in 1901. E. Andrews Wyllys IV conducted investigations in 1943 followed by Heinrich Berlin in the 1950’s. Extensive looting occurred during the 1950’s. The end of that decade began a number of expeditions by Cesar Lizardi (1959-63) to document the site. There followed Robert Rands (1967), Lorenzo Ochoa (1978), and Roberto Garcia Moll and Daniel Juarez Cossio of INAH in 1982-88 when excavation and consolidation of the structures took place.

STRUCTURES
There are six main groups that have been identified at Pomona, and are spread out over a large area. Only Group 1 has been excavated and restored.

Group 1 consists of thirteen structures arranged around a plaza on an axis of about 14 degrees east of north. The plaza measures about 332 feet/101 meters by 224 feet/68 meters. The main pyramid is located on the north end of the plaza, and is named Structure 1.

Structure 1 rises up about 32 feet/10 meters on seven tiers to a level summit. Its base measures about 94 feet/28.5 meters by 100 feet/30.5 meters. A central, plaza facing stairway leads to the summit which is crowned by a raised platform. In front of the structure is a round altar supported by sculptured supports. The sides of the alter contain a glyphic band. A smaller, round altar is located next to it. Behind this structure are a number of small, overgrown mounds.

A secondary structure abuts the west side of Structure 1. This structure is a low platform recessed in from Structure 1. It may have held buildings of a perishable nature.

The west side of the plaza is taken up by a large complex of structures that run the length of the plaza. All of these structures face east onto the plaza. The smallest structure is Structure 3 on the north end of the complex. This structure is supported by a low platform accessed by five steps that lead up to a small terrace. A further set of steps reach a small platform that may have held a structure of perishable materials. A small circular altar along with the remains of three sculptures containing glyphic text were discovered during excavations. Behind it is a small, platform structure, Structure 8, thought to be residential in nature. Adjoining Structure 3 on the south side is Structure IV.

Structure IV is of a pyramidal design, and is considered the most complex structure at the site. It displays a number of construction phases. A central stairway flanked by balustrades rises to a summit terrace. The terrace itself runs the length of the complex. A smaller set of seven steps, flanked by carved panels, lead to a multi-chamber, masonry structure that sits at the back of the terrace. The panels are nicely incised with geometric patterns and deity faces. Some have been removed to the safety of the museum. The structure once had a corbel vaulted roof. A number of impressive, carved tablets were located within. Later constructions include a small extended stepped platform on the northeast portion of the pyramid, and it appears the pyramid itself was incorporated into the final phase that formed a masonry symmetry with the other structures of the complex.

Structures V, VI and VII are next in line and share the same high platform base that merges into Structure IV. Each has a central stairway that leads from the plaza to the shared summit terrace. The individual structures are then accessed by a separate set of steps. Structures V and VI have three entryways separated by two pilasters that open into a portico. At the rear of the portico a single entryway leads into a back chamber. Both structures had masonry corbeled vaulted roofs. Structure VII is a low platform similar in design to its neighbors but no longer exhibits any masonry construction. Behind this complex is located another group of mounds that remain overgrown and unexcavated.

Across the plaza on the east side are found five structures in a row facing west back onto the plaza. These are all low platforms bases joined together that may have once held structures of a perishable nature.

The larger of the platforms is Structure 9 situated on the north end. It is a two-tiered platform accessed by a central stairway that opens onto a terrace. A low, central platform houses a small single chamber, perhaps a shrine.

Structure 10 is the smallest of the platform bases, and its level upper surface is reached by a five-step stairway. Structures 11 and 13 are slightly larger, and again have a smooth upper surface. Sandwiched in between is Structure 12.

Structure 12 is an unusual structure. It is a small three-tiered altar/platform that has indented, or tucked in corners. There are a set of steps on all four sides. This is a style of architecture that is thought to be from the Early Classic.

In the center of the plaza is an altar/platform, Structure 2. It has stairways on all four sides. The south side of the plaza is open, and leads to Group 2 which is currently overgrown and unexcavated. Much remains in Pomona to be discovered, excavated and reported on. 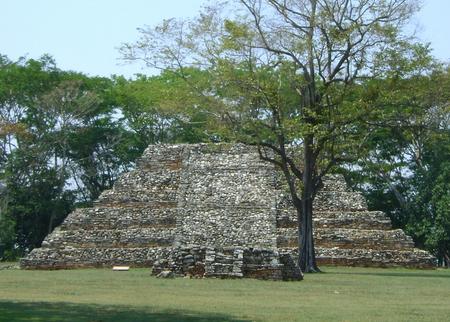 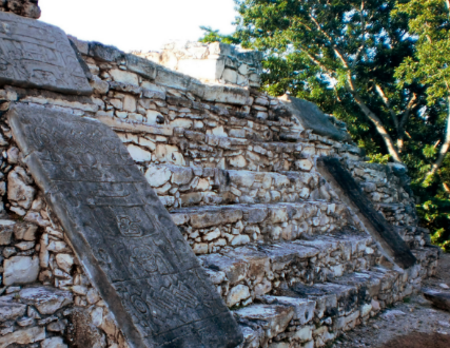 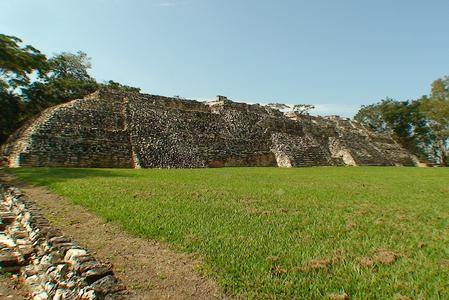 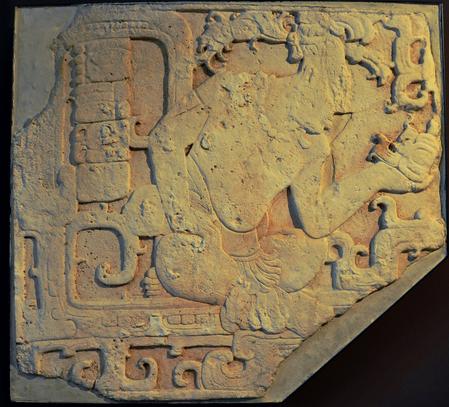 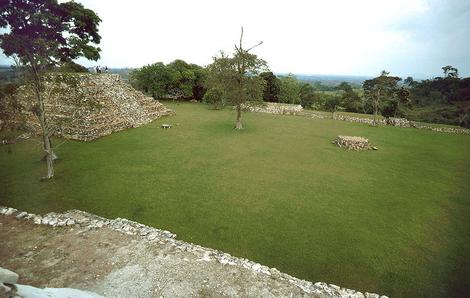 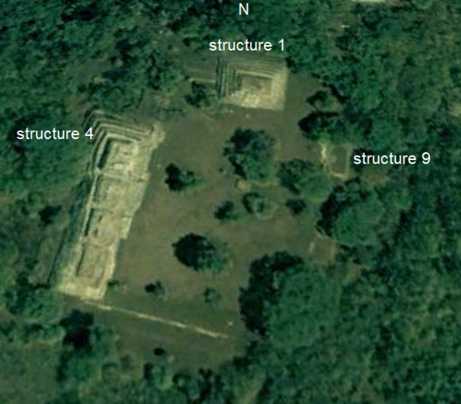