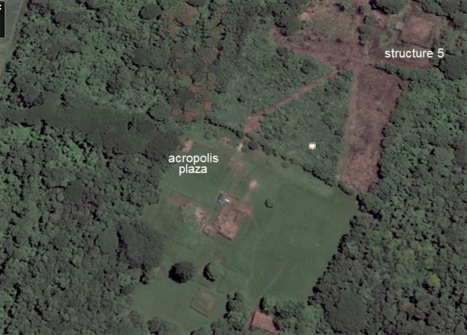 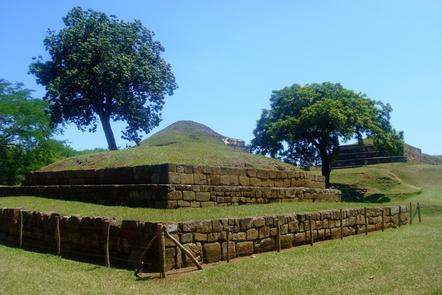 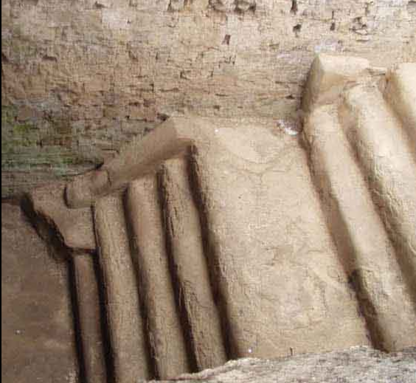 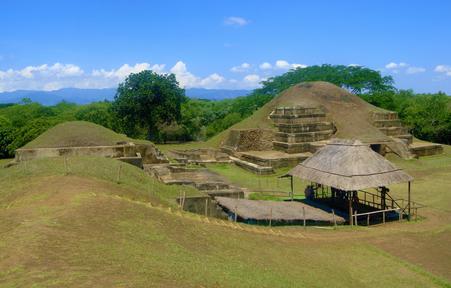 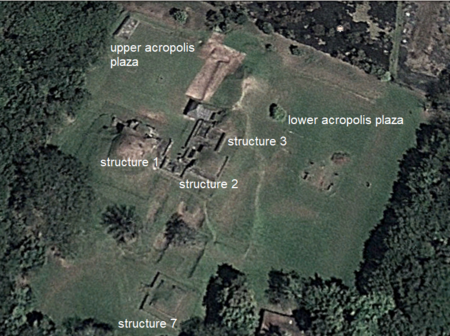 DESCRIPTION
​San Andres was an important Mayan archaeological zone having strong trade links with the Guatemalan Highlands, the Pacific Slope, and particularly with Copan in Honduras. Its name is derived from a hacienda within which it is located. The site was settled early on in the Middle Pre-Classic (800-300 B.C.), along the banks of the Sucio River.  It went on to become an important regional administrative and ceremonial center during the Late Classic (600-900 A.D). It is located in the Zapotitan Valley in central El Salvador.

San Andres is situated within an archaeological park, and is divided into two main groups, one of which can be visited. The area of the park is about 87 acres/35 hectares, with the core area easily visited. Over 60 mounds have been identified. The ruins of a 17th century indigo plantation are located on the property with associated historical information found in the museum. The park is 20 miles/32 kms from the Capital and about the same distance from the city of Santa Ana, in the central part of the country. Take the Pan American Highway past the town of Santa Tecla to km 32, and look for signage for the site which is located alongside the highway. The small, yet interesting UNESCO site of Joya de Ceren is located 3 miles/5 kms to the northeast. Combine the two for a fun day trip.

HISTORY AND EXPLORATION
San Andres was first settled in the Middle Pre-Classic. Monumental architecture begins to appear in the Late Pre-Classic (300 B.C.-200 A.D.). The tremendous eruption of nearby Ilopango volcano c.536 A.D. forced the abandonment of the site. This event had widespread repercussions throughout the Maya area, disrupting trade routes and creating a mass exodus of the large populations affected. It was originally thought that the eruption took place c.260 A.D. New evidence suggests that this eruption took place centuries later, and was responsible for a global cooling event, with failed crops and famines as noted in Chinese, Irish, Byzantine and Roman historical accounts. It has been proposed that this event was the immediate cause for the Early Classic hiatus, and the decline of Teotihuacan. The debate continues. The area was later reoccupied.

San Andres became a regional capital in the early 7th century during the Late Classic (600-900 A.D.), when it reached its apogee, with most of its core structures completed. A strong relationship has been identified with Copan in Honduras during this time frame. The kings of Copan at this time were K’ak ‘Chan Yopaat (578-628) and Smoke Imix (628-696). A ceramic style known as “Copador” was widely exchanged between the two sites. The central theme, written in glyphs on the upper band or the interior of the ceramics reads “ox uiil” in Yucatec Maya, and refers to “abundant food”. Unlike Copan, there are no stelae or other glyphic records that record the names of its rulers or its history.

San Andres, along with other Maya sites in El Salvador, such as Tazumal, were subject to the same collapse as was seen in the Maya Lowlands at the end of the Late Classic. After the collapse, the area received new immigrant groups such as the Pipil which remained in the area until the Spanish invasion.

In the Colonial era an indigo facility was established on the hacienda grounds. It, along with the rest of the site, was buried under ash from the 1658 El Playon volcanic eruption.

The first investigations of the site were carried out by John and Chris Dimick, and Stanley Boggs in 1940-41. Further excavations and restorations were conducted in the 1970’s under Stanley Boggs. From 1995-96 a research project was carried out by the Patronage Pro-Cultural Heritage group, including archaeologists Paul Amaroli, Christopher Begley, and Jeb Card.

STRUCTURES
There are two main structural groups at San Andres which are separated by a large plaza, the Grand Plaza. The Acropolis Complex lies at the southern end of the plaza on a north/south axis, about 26 degrees east of north. A large pyramid complex known as La Campana is located on the northeast end of the plaza. Low, unexcavated mounds are on both the east and west sides of the Grand Plaza.

The Acropolis Complex is set upon a large platform base having an upper and lower plaza. Structures 1-4 are set atop the upper plaza which measures about 9 feet/2.76 meters in height. The structures were partially excavated in the 1940’s, and were later given an exterior cement coating. Some “purists” have decried this coating, but it should be noted that the Maya themselves gave most all of their structures a coating of smooth stucco which in many cases was then painted in vivid colors.

Structure 1 is located on the southern end of the Acropolis Complex plaza. It is a multi-level, truncated pyramid that has been partially restored.  There are two small stairways that reach up to a terrace. From there a central stairway leads to the summit where a temple once stood. The structure reaches a height of about 49 feet/15 meters. An entryway at ground level to an interior chamber is evident on its north side. A small, single chamber structure is located next to Structure 1 on its east side.

Structures 2-4 are located on the east side of the Acropolis Plaza on a shared platform base. Structure 2 is a partially restored, three level truncated pyramid. It has a single, central stairway that leads up to a now level summit. Connected to this structure on its northside is a small, raised terrace that incorporated a small, rectangular structure.

On the north end of the terrace is Structure 3. This structure has received less restoration, but has the design of a small pyramid. An excavation in front of this structure has revealed a buried stairway that once rose from the original level of the plaza. At some point the entire plaza was filled and raised with the addition of over 100,000 brick-sized blocks. Structure 4 is an unexcavated mound.

The north and west sides of the plaza have low platform mounds with the northwest corner platform exhibiting the foundations walls of a two-chamber structure. Two small platform/altars are located in the center of the plaza. The lower level of the Acropolis Complex has a low platform mound on its north side, and some scattered foundation remains of other small structures, now overgrown.

Structure 7 is located just behind Structure 2 on ground level. It is situated on the east side of a small plaza. This was possibly a royal residence built upon a three-tiered platform. A central stairway is located on its west side. An important cache was discovered within the structure that shows a close relationship to Copan. It contained an eccentric flint associated with royalty, as well as artifacts connected to auto sacrifice such as a sting ray spine and spondylus seashells, all of these directly related to Maya kingship and dynastic succession rituals.

Structure 5, also known as La Campana, is situated about 700 feet/213 meters north across the ground level Grand Plaza. It is set upon a large, raised platform base. This is the largest structure at the site with a height of about 60 feet/18 meters. It is a pyramidal structure that has not been restored, though excavations have been initiated. There are twin stairways that are on the western side that lead to an upper terrace. From there a central stairway rises to a summit temple.

Numerous tombs have been discovered at San Andres containing “Copador” style ceramics. This ceramic style is also heavily found at Copan as well. The on-site museum has a fine collection of these and other ceramics. 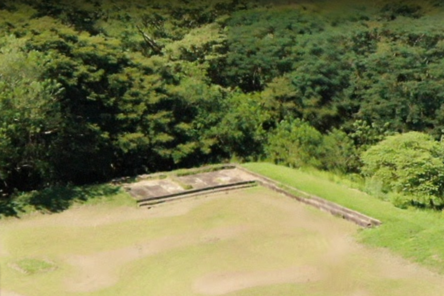 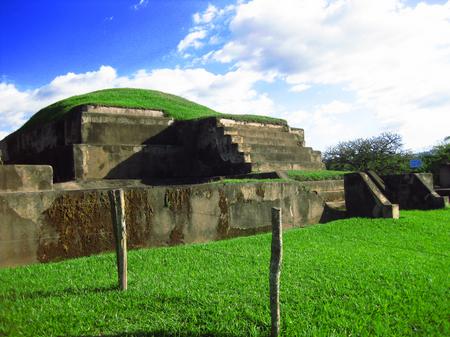 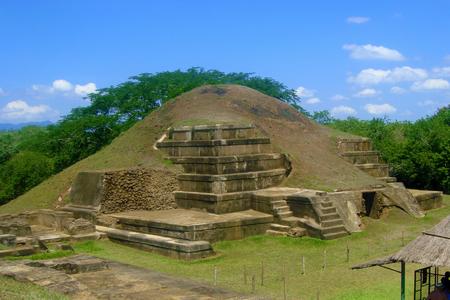 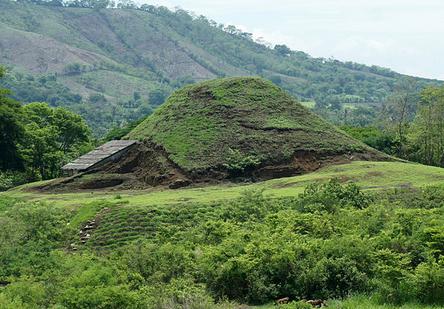 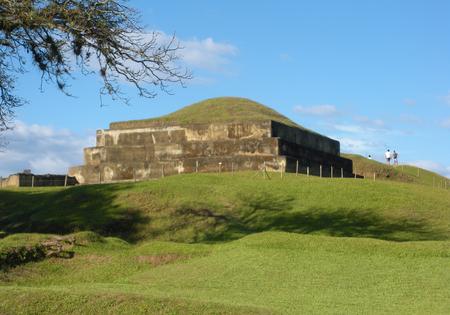 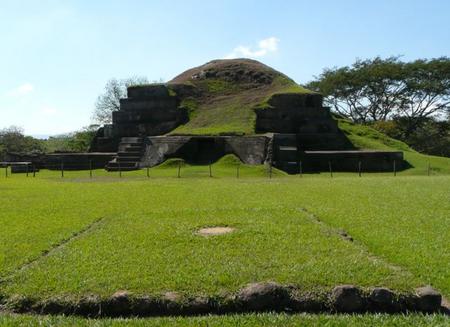 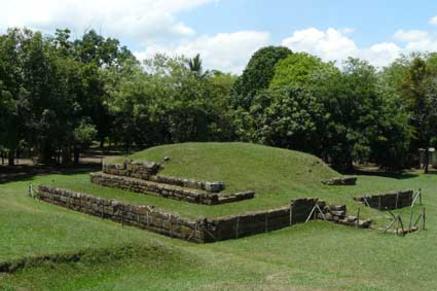 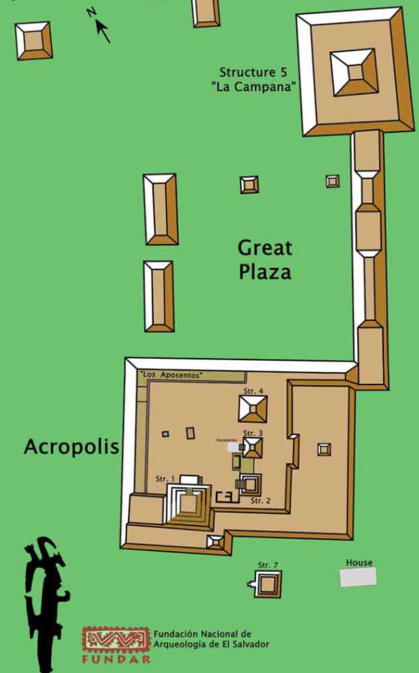 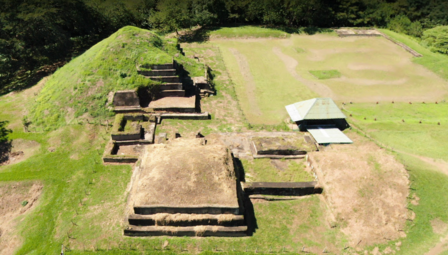