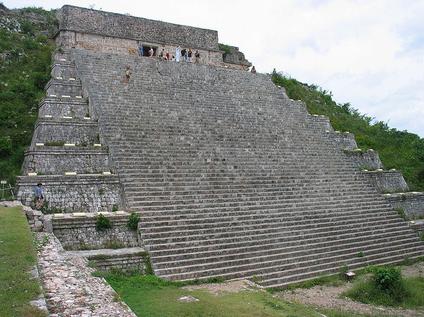 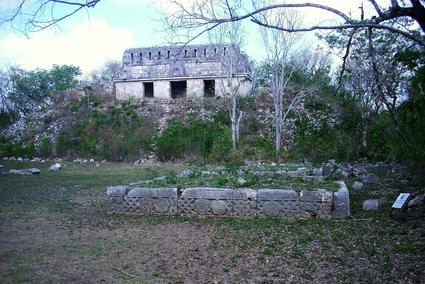 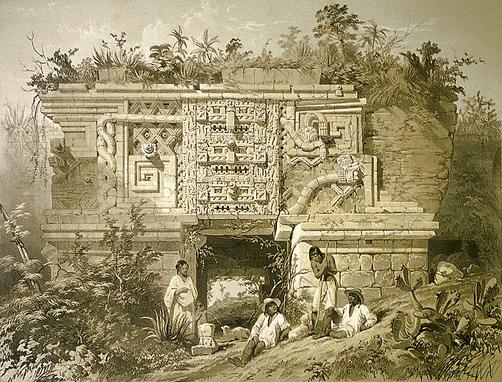 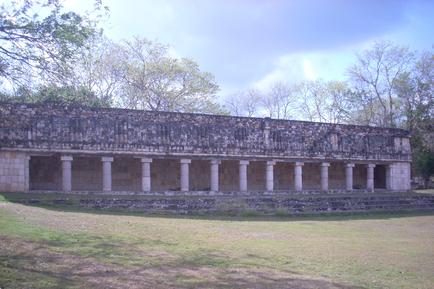 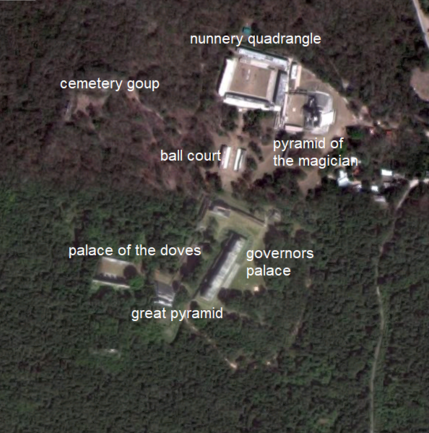 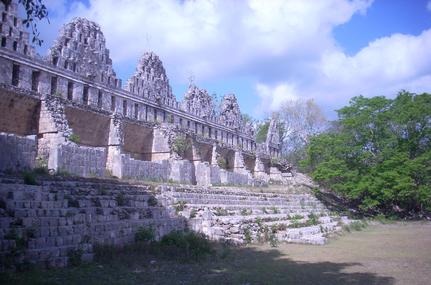 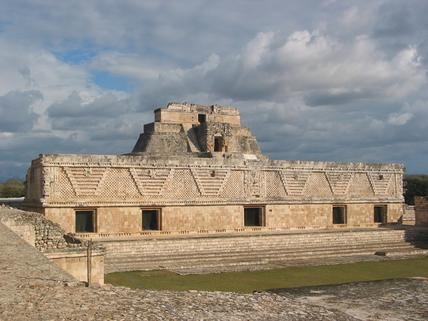 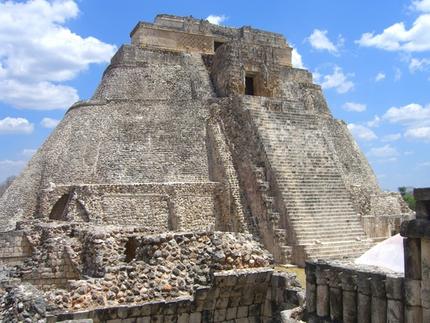 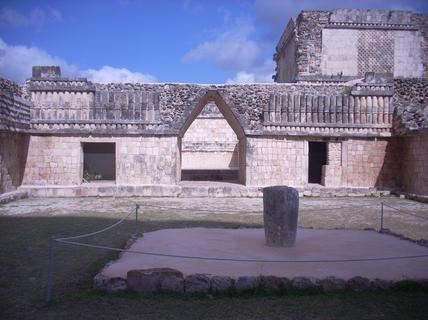 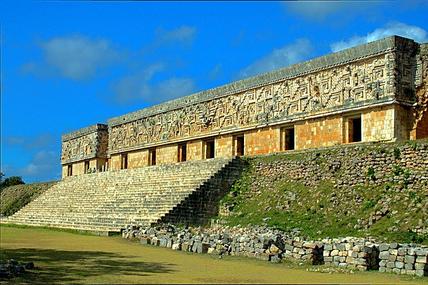 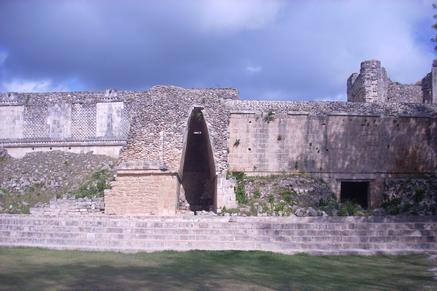 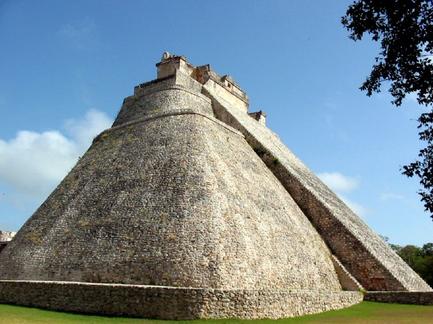 DESCRIPTION
Uxmal (Thrice built), together with Sayil and Labna, is a designated UNESCO World Heritage Site. It is the largest, most elegant, and most important ruin site in the Puuc area. The Pyramid of the Magician is a truly magnificent structure. Equally impressive is the Governor’s Palace and the Nunnery. The majority of the structures seen today date from the Late Classic (600-900 A.D.).

The site contains numerous architectural groups which include pyramids, palaces, and a ball court. Sacbeob (raised white stone roads) interconnect the groups and extend out to nearby related sites such as Kabah.

Uxmal is located in the western Yucatan off of Highway 261, about 42 miles/70 kms south of Merida, along the “Puuc Route”. This site is one of a series of Maya ruins that can be found in the general area and its architectural style is named after the low, arid hill country in which they are located. Others are Kabah, Sayil, Xlapak, and Labna.

HISTORY
Uxmal dates from the Classic Maya era (600-900 A.D) and is termed Puuc style. The earliest recorded date found so far is 569 A.D. There is scant glyphic information concerning the rulers of Uxmal. Two stelae have been recovered that name one ruler, Lord Chaac, and his parents, and have been dated to c.900 A.D.

Uxmal was abandoned more than once, and it is noted in the Spanish chronicles that Uxmal was one of the few inhabited sites at the time of the Conquest. It was the main capital of the Xiu, who ruled here until about 1050 A.D., after which time the site was abandoned. The Xiu along with the Itza were the two main cultural groups of the Yucatan from the Classic period forward. There was a reoccupation of the site sometime during the Post Classic (1200-1500 A.D.).

Uxmal was first reported on by Friar Diego Lopez de Cogolludo in the 17th century. Jean Fredrick Waldack visited the site in 1838. Next came those intrepid explorers John Lloyd Stephens and Fredrick Catherwood in the 1840’s. Their books are a fascinating read with exquisite paintings of the ruins. These books are highly recommended, and give the modern traveler a great perspective from this time period.  Excavation and restoration work started in earnest in the 1920’s and continues to this day.

STRUCTURES
The first structure encountered when entering the site is the highly unusual House of the Magician, also known as The Pyramid of the Dwarf. This unique oval shaped pyramid is over 93 feet/28 meters in height. It was built over five times, with each newer and larger structure superimposed over the other, as was usual with Maya construction techniques.

The earliest structure, Temple I, is still partially exposed at the western base. This structure contains the earliest recorded date; 569 A.D. The second structure, Temple II, is accessed through a hole dug into the main stairway. Temple II and IV have entrances at the top of the pyramid. One of these entrances is through an intricately carved stone mosaic mask facade of the rain god Chaac, and is done in the Chenes style of architecture. This style was very prominent to the south of the Puuc area, and was also found at some northern sites such as Chichen Itza. The final structure, Temple V, is built over the roof comb of Temple III. There are a number of Chaac masks that line the outside of the western staircase. These temple constructions span an era of about three hundred years. A truly exceptional pyramid.

Directly across the House of the Magician is a structural group known as the Nunnery Quadrangle. Of course this has nothing to do with nuns, and its name, like many others throughout the Maya area, is a holdover from the Spanish colonial period. This is basically a very large plaza fronted by a ring of highly decorated one story buildings oriented to the cardinal directions.

This plaza group is accessed through a corbeled arch built into one of the structures. Each structure has an elongated rectangular shape with the structure built on a low platform containing a broad stairway. The upper façade of the structure is beautifully worked in stone veneer depicting geometrical patterns and elaborate Chacc (Rain God) masks.

The North Building, considered the oldest and most important, is also the longest at about 270 feet/82 meters. It contains numerous Chaac masks on the cornice and in panels flanking the façade of the structure. Also present are carefully carved stone serpents set in geometric patterns undulating across the façade. It contains eleven double vaulted rooms. Directly in front is the Temple of Venus.

The South Building is the entrance building to the plaza and incorporates an undecorated portal arch. Indigenous style huts surmounted by Chaac masks are found on the inside walls of its eight doorways. The East Building contains 5 doorways and shows a conservative use of decorative mosaic stone. The West Building was the last built and incorporates outside architectural influences and has some of the richest decoration in the group. Above the central doorway is an interesting mosaic stonework throne with a feathered canopy containing an anthropomorphic figure of a turtle with a human head.

Behind the Nunnery to the west is the Stelae Platform, on which were grouped a number or carved stone slabs (stelae) erected to commemorate different historical events. A bit southwest of this is what’s called the Cemetery group consisting of a pyramid, behind which is a small courtyard surrounded by low structures. These meld into a series of other ruins, structures and complexes.

The most impressive of these, and one of the more beautiful buildings in Uxmal, is the Governors Palace. This massive 320 foot/96 meter long building is an architectural gem. This building contains two soaring arches, among the highest in the Maya World, which divides the building into three sections. At an unknown time in antiquity these arches were filled in with cut stone.  Above the medial molding a frieze runs the entire length and consists of over twenty thousand masterfully cut pieces of mosaic stone combined into Chaac masks and geometric designs. A stunning visual experience.

At the corner of the terrace to the Palace of the Governor is the small House of the Turtles. This is a very attractive structure.

The House of the Doves is an inspiring building with a long decorative open work roof comb. Most of the front portions of the rooms have collapsed. The Maya used both wood and stone lintels in their construction. Most of the wood lintels have shifted resulting in the collapse of these rooms.  This however, does not overly detract from the sheer majesty of the building.

Just east of the House of the Doves is the Great Pyramid. The pyramid has an extremely wide staircase and is composed of nine levels. This may have been constructed in recognition of the nine levels of the Underworld. The temple at the top contains interesting designs as well as Chacc masks.

Many of these Chaac masks at Uxmal, and throughout the Maya area, contain small indentations on the curved snout to either burn incense or to produce a small flame. This must have been a very moving sight.

There are other complexes and individual structures throughout the site including the House of the Old Woman, House of the Birds, the North Group, and the Ball Court to name a few. One should plan on a full day here to truly appreciate the grandeur of this important archaeological site. 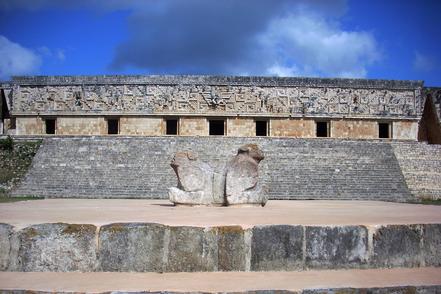 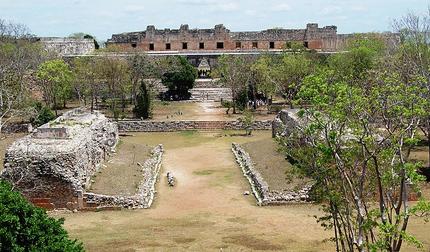 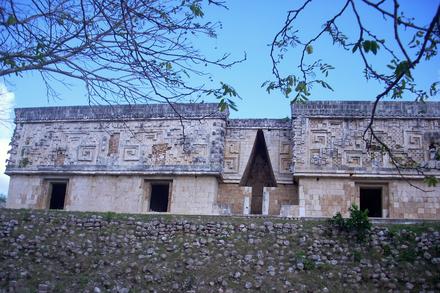 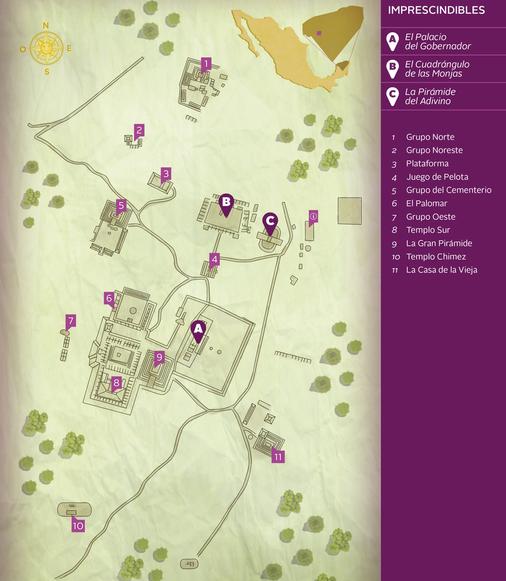 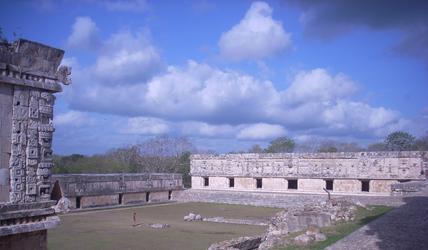 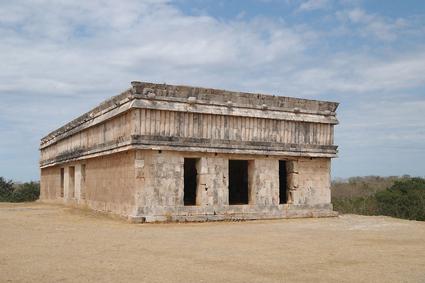