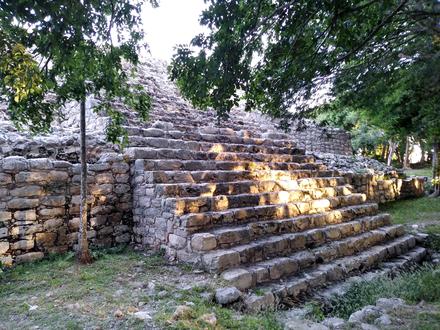 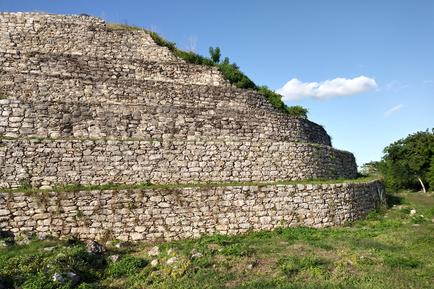 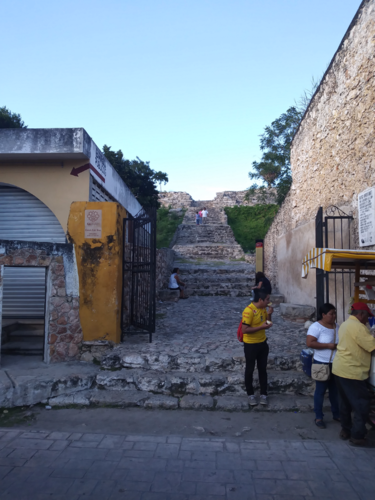 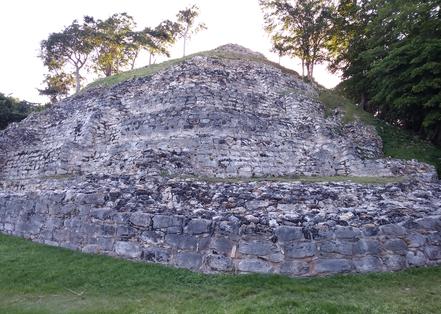 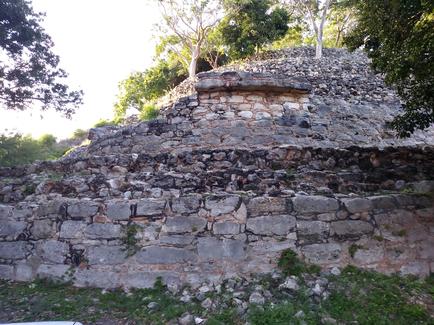 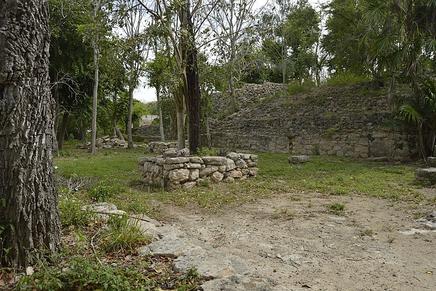 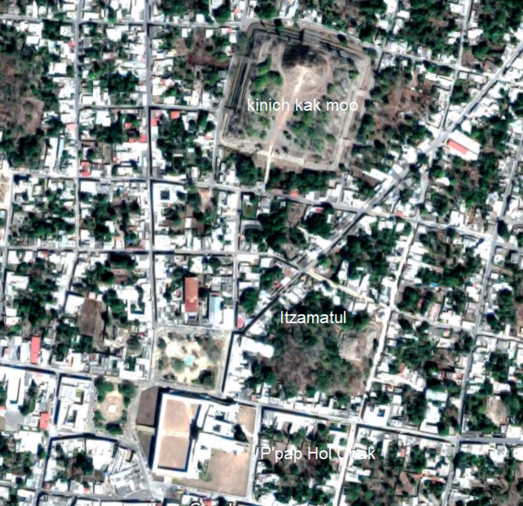 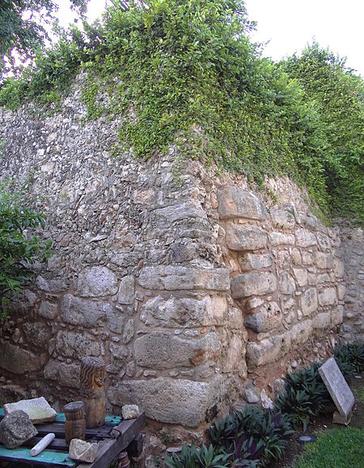 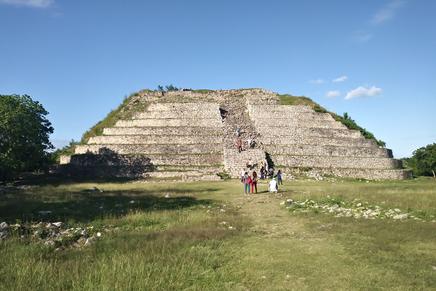 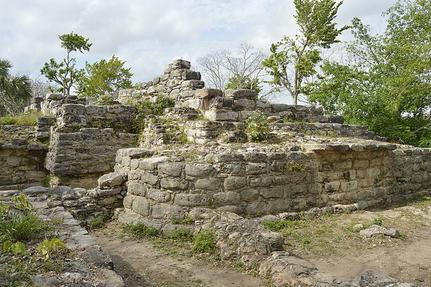 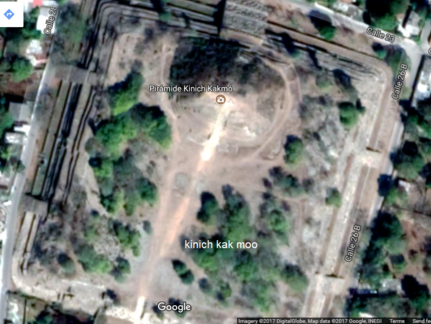 ​This important Maya archaeological zone is located to the east of Merida on secondary roads reached off Highway 180. It is thought to contain the largest pyramid structure by volume on the Yucatan Peninsula, and perhaps the third or fourth largest in all of Mesoamerica. It is located in the center of the town of the same name, and has been continuously inhabited since about 700 B.C.

The site exhibits an architectural style known as “Megalithic”. This style incorporates huge blocks of stone in the design of the structures with the corners of the structures nicely rounded. Another feature is protruding slabs that run at intervals around the circumference of the structure. These features can also be seen at other sites such as Ake, and Uci in the vicinity of Izamal, and is a testament to Izamal’s influence.

A number of sacbeob (raised white stone roads) lead out from Izamal to other dependent sites such as Ake and Kantunil. The Ake sacbe has been partially restored.

The archaeological zone is within and outside the present town, and only the major structures have survived. The nondescript entrance to Kinich Kak Moo pyramid is along 27th street between 26th and 28th street.

HISTORY AND EXPLORATION
Izamal’s settlement reaches back to the Middle Pre-Classic (700-200 B.C.), and most of its construction was accomplished during its heyday in the Late Pre-Classic through the Early Classic (200 B.C.-600 A.D.).  It began a slow decline after this though it did experience a small spurt of activity in the Terminal Classic (900-1100 A.D). It is thought that at this time Izamal came under the influence of Chichen Itza. Izamal continued to be a pilgrimage destination into the Spanish Colonial Period.

Izamal was first mentioned in the Spanish chronicles, but the first full report was done by those intrepid explorers John Lloyd Stephens and Frederick Catherwood in the 1840’s. Catherwood, a gifted artist, drew a portrait of the famous face of the Sun god, Kinich Ahau, that once adorned the side of a structure. It has since disappeared and this drawing remains our only record. Unfortunately, much of the site has been quarried for building materials over the centuries, while other parts have been completely built over. There is ongoing excavation and restoration projects throughout the site.

The Spanish invaders recognized the importance of the ruins to the indigenous Maya and erected a massive religious complex known as the Convent of San Antonio de Padua within its ceremonial center in 1549 A.D. This Catholic religious site was visited by Pope John Paul II in 1993, and has since become a modern pilgrimage site for Mexican Catholics.

The site of Izamal encompasses the current town, and its core area was constructed around a huge plaza referenced here as the Grand Plaza.

​By far the most important and impressive structure is the main pyramid platform and pyramid temple of Kinich Kak Moo, Sun-eyed-Fire-Macaw. This deity held an important place in the Maya Pantheon of gods. The base of this massive pyramid platform measures close to 600 feet square/200 sq. meters, and its total height is over 110 feet/34 meters. It is located on the north side of the Grand Plaza, and was constructed between 400-600 A.D. The structure was built over a cave which holds an important place in the religion and mythology of the Maya.

There are six stairways to the platform plaza: two each on the east and west sides; and one each on the north and south sides. The north stairway is very steep, and is currently in a ruinous condition.

On the east side of the Grand Plaza is a complex called the Itzamatul which rose at one time to about 80 feet/26 meters in height. It consists of three building phases, as was a common Maya building technique. The structure that one sees today dates mostly from 700-850 A.D. It is the second largest structure at Izamal. It is located on 26th street between 29th and 30th.

A large, multi-tiered platform forms the base of this complex. There are the remains of stairways on three sides that once led up to the platform plaza. The platform plaza contains a number of structures, the most important and largest being the temple pyramid dedicated to the Maya deity Itzama. This structure is on the east side and faces west across the platform plaza having a central stairway that reaches up just below the summit. A small terrace contains what may have been an altar. A second stairway then leads up to the summit which contains the ruins of a temple. There are several other unrestored structures that front the temple pyramid and spread out across the platform plaza. A “C” shaped structure is located on the extreme west side, and a linear structure occupies the south side.

On the west side of the Grand Plaza is a temple structure called the Kabul. It was this structure that Stephens reported on, and where Catherwood sketched the great Sun god mask. A portion of the platform wall is visible in the Arts and Crafts Center courtyard, and the upper portion of the pyramid can be viewed from the courtyard of a retail boutique store.

On the south side of the Grand Plaza is a structure named the P’pap hol Chak. The Convent of San Antonio de Padua was constructed atop this huge platform structure, and no noticeable trace remains visible.

A complex known as Habuc is situated further south of the Grand Plaza. It is a large two-tiered platform which contains several structures set around a central plaza. A megalithic stairway on the west side provides access to the platform plaza.

There are other smaller structures located within and without the town including Conejo, Hun Pix Tok, and Chaltun Ha. At the edge of town are the remains of sacbeob (white stone causeways) that lead to the sites of Ake, 20 miles/32 kms to the west, and Kantunil, 12 miles/19 kms  to the south. 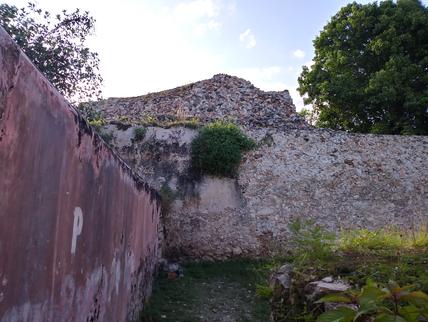 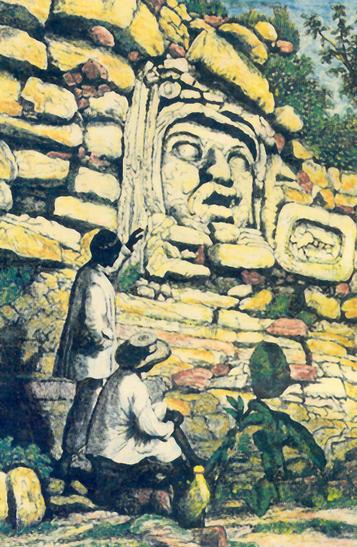