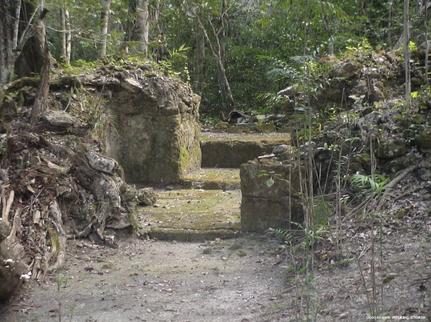 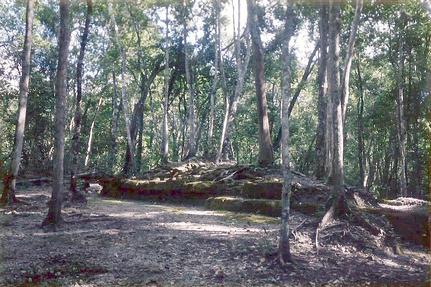 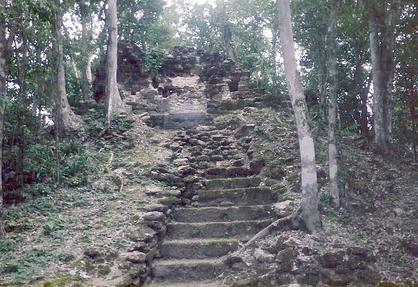 DESCRIPTION
Nakbe, “By the Road”, is an Formative Period (1400-1000 B.C.) site located within the Mirador basin, about 8 miles/13 kms south of the major site of El Mirador. It is one of the largest sites from this very early period, and contains the earliest ball court and platform structures in the Maya area.

It has three main groups, two of which show signs of settlement from this early period. The third group dates from the Late Classic (600-900 A.D.). The site is bounded on the north and west by an escarpment and on the east by a low lying swamp.

The site can be accessed from El Mirador or Tikal through organized tours. These can be arranged in the town of Flores or at Tikal, and the itinerary requires a few days. Flores, an island city in Lake Peten Itza, is most easily reached by air from Guatemala City. Modern Flores, ancient Tayasal, was the last independent Maya Kingdom to hold out against the Spanish onslaught which finally fell in 1697.Travel to Flores can also be made by road west from Belize, or north from Guatemala City.

HOURS: By organized tour
ENTRANCE FEE: Included in tour price
GUIDES: Services can be arranged in Flores or Tikal
SERVICES: None
ON-SITE MUSEUM: No
ACCOMMODATIONS: Food and lodging found in Tikal and Flores, and provided by tour companies once on the tour.
GPS: 17d 41' 20" N, 89d 50' 33" W
MISC:

HISTORY AND EXPLORATION
Early settlement at Nakbe began around 1400 B.C. By the beginning of the Middle Pre Classic (800-300 B.C.), the site reached its apogee with the advent of monumental architectural construction and the erection of stelae (carved stone monuments).

By the beginning of the Late Pre Classic (300B.C.-200 A.D.), Nakbe, like El Mirador, began a steep decline, and was largely abandoned. The site was resettled in the Late Classic. No major construction took place at this time, but a distinctive pottery style was produced here, as well as at El Mirador, known as “Codex Style”.  By the end of the 9th century, Nakbe was abandoned for good.

A series of sacbeob (raised white stone roads) connects the different groups and structures within the site. During the Pre Classic, a sacbe connected Nakbe to El Mirador 8 miles/13 kms distant to the northwest. In the Late Classic, a sacbe was constructed to the powerful city/state of Calakmul, about 25 miles/40 kms to the north in present day Mexico.

Nakbe, like El Mirador, was first identified by aerial photography in 1930. The first researcher to the site was Ian Graham who made an initial survey and excavations in 1962. In the 1980’s and 90’s extensive work was performed at the site by UCLA and the government of Guatemala under the direction of Dr. Richard Hansen. A limestone quarry located here has been extensively excavated and reported on.

STRUCTURES
There are a number of structures located at Nakbe in various states of excavation and restoration. The site consists of two main structural groups laid out on an east/west axis. The oldest known ball court in the Maya area is located here.

At the Western Group, the main structure is an impressive truncated pyramid known as Structure I. This is the tallest structure at the site and rises to a height of 150 feet/46 meters. The main stairway to the summit courtyard is flanked by stucco masks. The summit courtyard is surrounded by 6 temples with a stairway, also flanked by stucco masks, leading up to the largest of the temples. From the summit the La Dante Complex at El Mirador can be viewed in the distance. There are several other structures and platforms that ring a central plaza.

The Eastern Group is composed of several pyramidal structures and platforms dominated by Structure 59 which has a height of 100 feet/31 meters. This structure is surmounted by 3 small temples in an example known as “Triadic Style”, a common construction design from the Late Pre Classic, and may have had astronomical associations.

The Eastern Group also houses a very early stela, Stela 1, which depicts a scene later written down in the famous K’iche Maya book, The Popol Vuh, written centuries later and showing continuity in Maya mythology through the ages.

A sacbe leads from the Western Group northwest to the Late Classic complex known as the Codex Group. This complex was inhabited and enlarged by an influx of Maya settlers during this later period.  While this occupation was brief, it is noted for the exquisite ceramics produced both here and at El Mirador known as “Codex Style”.​ 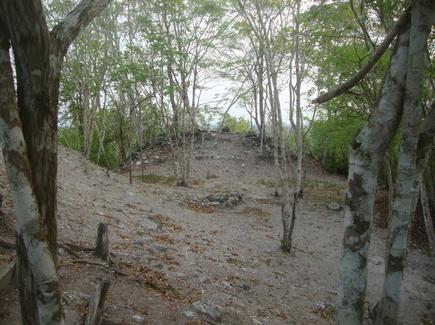 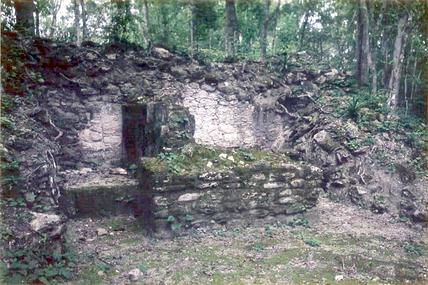