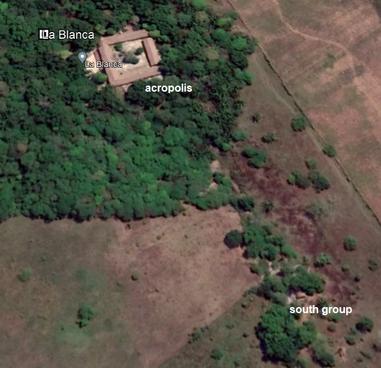 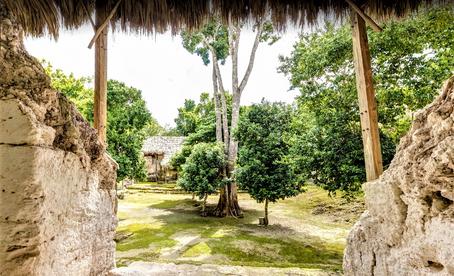 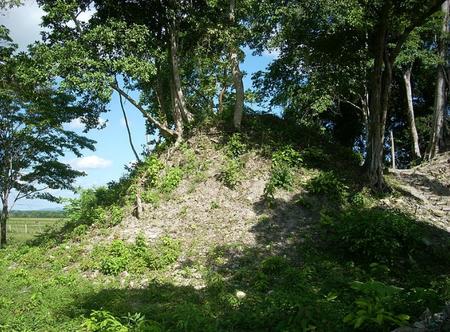 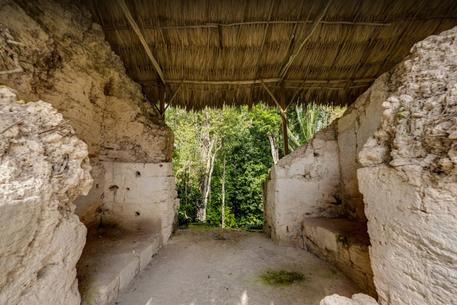 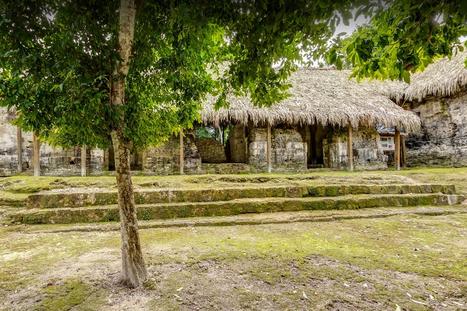 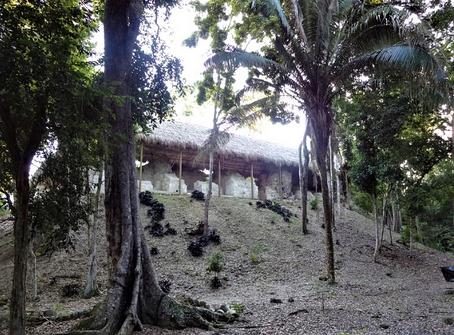 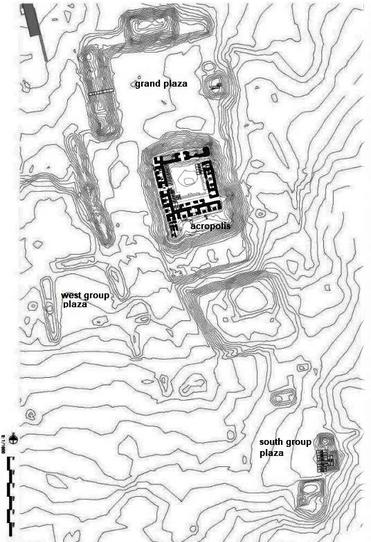 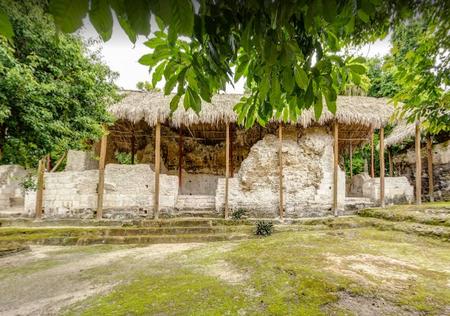 DESCRIPTION
La Blanca is an archaeological zone located within the Mopan River basin within the municipality of Melchor de Mencos. Its original name is unknown. The site has a settlement history that dates back to the Early Classic (250-400 CE). It is thought that the site was a dependency of a larger city such as Yaxha or Naranjo.

The site consists of two main groups, and is among a small minority that have an orientation on a North/South axis about 12 degrees west of North. It is located about 1 mile/1.6 km north of the Salsipuedes River, a tributary of the Mopan, which was a major trade route at that time. The ruins are not to be confused with the important Pre-Classic site of the same name located on the Pacific Slope of Guatemala, and southeast of Izapa in San Marcos Department.

La Blanca is reached by traveling east out of Flores on the CA13 about 29.5 miles/47.5 km to the small pueblo of El Zapote, also identified as Aldea Las Vinas, on the south side of the road. At the southern end of the village a winding, unpaved road leads south 5.25 miles/8.5 km to the larger village of Aldea La Blanca. Pick up a guide and water/snacks here. The site is located 1.75 miles/3 km to the east of the main village out on the north lake road. From the border town of Melchor de Mencos take the CA13 west just past the village of La Polvora, about 12.5 miles/20 km to a turnoff on the south side at a concrete bus stop. This unpaved road will lead 10.75 miles/17 km to the site.

Flores is a great base to visit the numerous sites in the Peten. Plan on as long a visit as possible.

HISTORY AND EXPLORATION
La Blanca has a settlement history showing ceramic evidence dating back to the Early Classic, along with the beginnings of masonry architecture as evidenced in substructures, especially at the South Group. The site reached its apogee during the early part of the Late Classic (600-850 CE), and experienced a growth spurt in the early Terminal Classic (850-1050 CE).

There have been no stelae or other glyphic texts recovered to identify its rulers or political associations with other sites. Due to this complete lack of glyphic information or any other sculptured monuments, researchers believe the site was most likely an administrative dependency of a more powerful kingdom, possibly Yaxha or Naranjo.

A Spanish captain, Pedro Montanez, scratched his name in the stucco of the Acropolis in 1752 while passing through. The site was first reported on by Teobert Maler in 1905. There followed Raymond Merwin with the Peabody Museum in 1913.  Ian Graham visited the site in the 1970’s, and produced a site plan (1980). Numerous investigations, excavations, and consolidations have been carried out on a regular basis starting in the 1990’s by the Guatemalan government, various universities and institutions. Since 2004 the La Blanca Project has been undertaking excavations, consolidations, and research.

STRUCTURES
La Blanca consists of two main groups; the Grand Plaza with the Acropolis, and the South Group. The structures seen today all date from the Late Classic (600-850 CE), with some showing modifications in the Terminal Classic. There are numerous smaller structures and groups located throughout the site, all mound covered.

The Acropolis is set upon a large, three-tiered platform base measuring about 326 feet/100 meters x 489 feet/150 meters, and about 26 feet/8 meters above plaza level. It has a quadrangular plan that surrounds an inner courtyard, and has restored palace structures on all four sides. The constructions exhibit superior stone workmanship, though their corbeled vaults have mostly collapsed. Traces of red and black paint remain indicating that these structures were once painted. Remains of architectural elements show that the palace structures once displayed a frieze on their outer walls. Excavations of substructures beneath the Acropolis have revealed intact corbel vaulted chambers. The main stairway was from the Grand Plaza reaching up to the north palace.

The north, west and south palaces connect at the corners, and form a continuous structure, Structure 6J2, having eighteen chambers mostly facing away from the inner courtyard. These chambers, many of which contain a bench against the rear wall, face outward onto a narrow terrace. The central chamber in each palace acts as a passageway into the inner courtyard and has a bench recessed on each side. The south palace faces onto a secondary courtyard with small structures on the east and west sides. The east structure, Structure 6J3, has been restored and features several chambers. The west side is a small mound. The south side of the courtyard looks over a now dry reservoir with a series of terraces that led down to it.

In 2013 the La Blanca Project excavated a beautiful carved stone frieze on the west side of a substructure beneath structure 6J2. The frieze measures 15.5 feet/4.75 meters in length, with a height of 4.9 feet/1.5 meters. Its composition features a central mask surrounded by geometric designs, and is extremely well-preserved. (see image below at end of text)

The palace on the east side of the inner courtyard, Structure 6J1, is an independent structure and appears to have been the most important of the four as its chambers face directly onto the inner courtyard. It is presumed that the ruler of the site resided here. The rear of the structure is a solid wall that once incorporated a frieze.

Incised graffiti has been cataloged on some of the interior palace walls, especially Room 4 of the South Palace. These drawings depict musicians, buildings, animals, rulers and other subjects. A number of burials have been found within the Acropolis, some dating to the early Terminal Classic.

The South group is located at the end of the sacbe and has 4 structures set around a plaza about 163 feet/50 meters square. Excavations have yielded an Early Classic beginning for the group. The principal structure, Structure 10L2, is on the east side of the plaza. This structure has been excavated and restored showing a three-tier pyramid base with a single chamber at its summit. A central stairway leads down to the plaza. Directly next to this structure is another pyramid mound, Structure 10L1, of similar size.

The north side of the plaza features a small mound, Structure 9K1. The south side is taken up by a platform mound Structure 10L3, with the west side open. This group is aligned along the cardinal directions, showing its Early Classic planning. 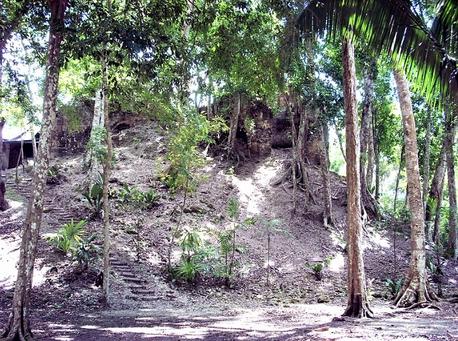 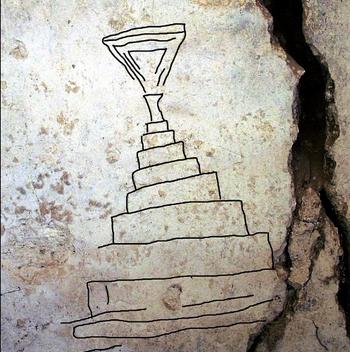 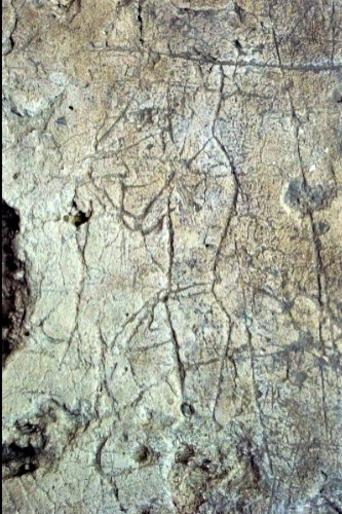 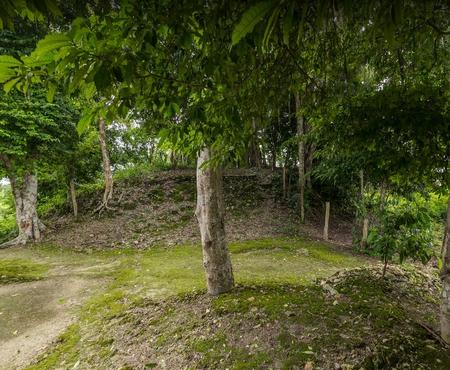 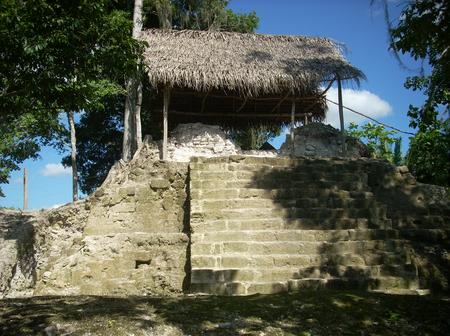 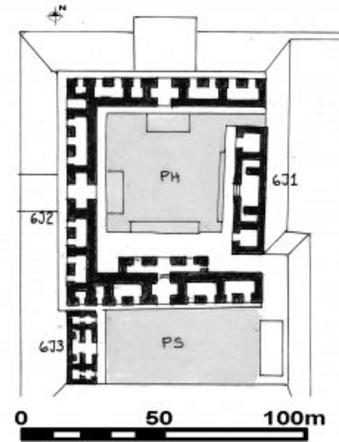 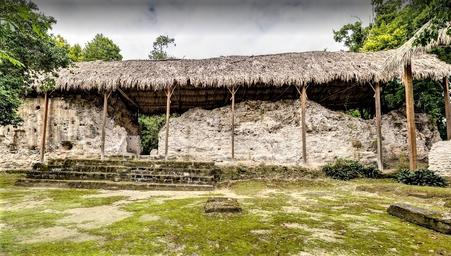 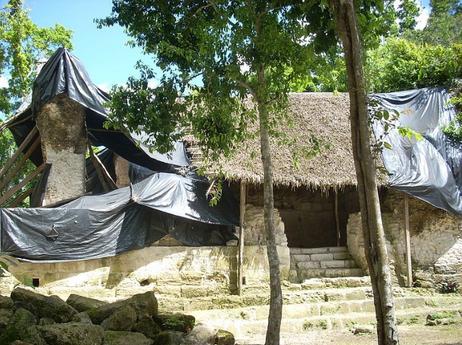 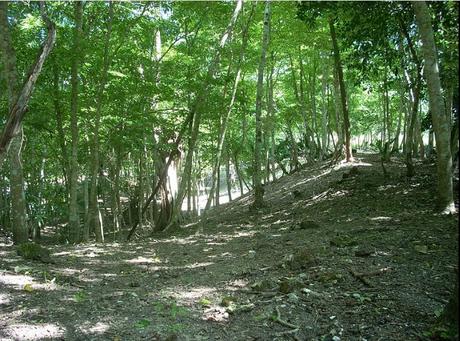 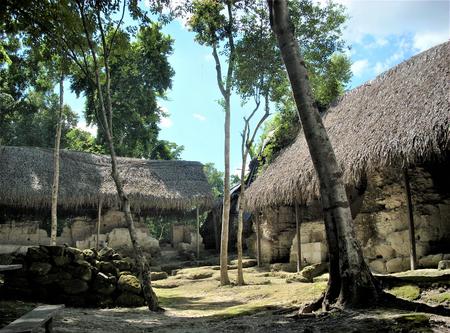 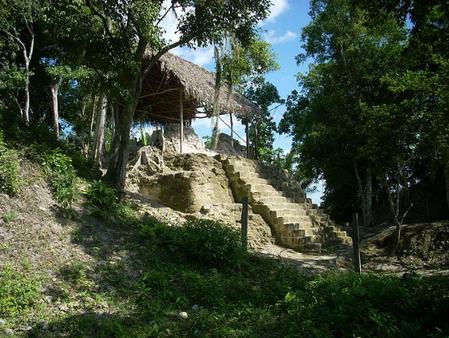 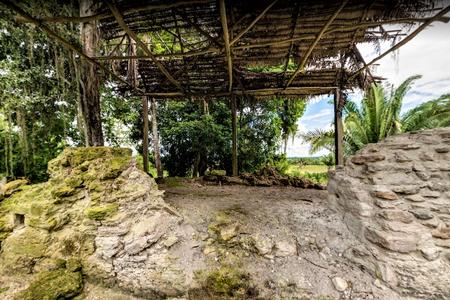