DESCRIPTION
Piedras Negras, “Black Stones”, dates back to the Pre Classic (1000 B.C.-250 A.D.) and is located along the banks of the Usumacinta River. The site is on a high embankment commanding a strategic view of the river, and controlled the trade flowing in both directions.  It is within a dense tropical forest which is a parcel of the Sierra del Lacadon National Park. The original name for the site has been deciphered as Yo’kib “Entrance”. It lies 24 miles/40 kms downstream from the great city/state of Yaxchilan now in Chiapas, Mexico. The Usumacinta River forms the boundary between Guatemala and Mexico.

The population reached its peak in the Late Classic (600-900 A.D.) and has been estimated at 2,500 inhabitants, and controlled an area containing some 50,000 people. Most of the structures at the site date to this era. The core area is comprised of three main groups situated around central plazas. There are two ball courts located within the site. Numerous carved stelae and altars have been found throughout the site. Unfortunately, many of the circular altars have been allowed to erode in the unforgiving tropical environment with the loss of valuable glyphic information.

Piedras Negras is only accessible by boat down the Usumacinta River from the border town of Frontera Corozal in Mexico. This is a long trip that passes through some beautiful scenery. Frontera Corozal is reached by the main highway southeast from Palenque. This area of Mexico is a bit remote. Check security conditions before leaving either Palenque or San Cristobal de las Casas to reach Frontera Corozal. Make sure you take your passport as Piedras Negras is in Guatemala, as you must first check in at the military checkpoint a bit further downstream before entering the site.

HISTORY AND EXPLORATION
Piedras Negras was a regional city/state during the Classic Period (600-900 A,D). The site shows early signs of settlement from the Middle Pre Classic (800 B.C -300 B.C.). It reached its apogee in influence and architecture in the Late Classic (600-900 A.D.). By the second half of the 9th century it began the same decline and eventual abandonment as other lowland Maya sites.

Piedras Negras was the second largest site in the Usumacinta River Basin after Yaxchilan, with whom at times it was allied with, and at other times in conflict with. The history of these relations and conflicts with the surrounding sites are recorded on the numerous stelae found here. There is a long recorded dynastic succession that began around 297 A.D. with Ruler A, and terminates with King Kin’ichYat Ahk II in 808 A.D.

Piedras Negras was visited by Teobert Maler and photographed in the 1890’s. He was followed by Sylvanus Morley in the early 1900’s when the first excavations took place. The University of Pennsylvania conducted extensive excavations during the 1930’s. Tatiana Proskouriakoff researched the site in the 1960’s, and it was here that she made her significant interpretations of the glyphic texts, and deduced for the first time that many were historical records of the lives of the rulers. She is interred at the top level of a temple structure in Group F overlooking the Usumacinta River.

There have been numerous excavation, mapping, and consolidation projects at the site up through the present time.

STRUCTURES
The site is entered from the river up a steep embankment into the South Plaza Group. The entire area is overgrown in dense tropical rainforest, and the structural groups are reached along winding paths. Facing the plaza from the southwest are Structures R-3 and R-4, two temples atop a broad platform. To the northwest is Structure R-5, a platform containing a single temple. Directly across the plaza are two temples on an extended platform. A small complex is on the northeast side of the plaza. This area appears to have been an elite residential area.

Behind the South Plaza Group is the East Plaza Group. Fronting the plaza are two structures arranged on tiered platforms. A steam bath structure is located here.

Backing onto the East Plaza Group is the West Group containing the larger complexes at the site and built around a grand plaza. A complex known as the Acropolis is located on the northwest side of this plaza. It rises from a multi-tiered platform and contains several structures around a courtyard, and was a civic and residential center.

There are numerous stelae (carved stone monuments) and circular altar stones located throughout the site with beautiful glyphic inscriptions. Stela 12 has a renowned narrative scene that depicts a group of eight prisoners in a painful posture at the feet of a Piedras Negras ruler.

There are other smaller groups of structures and residential areas throughout the site. There is even the rusted carcass of an early tractor that was used to clear the site during the 1930’s excavation project. During this excavation it was reported that one of the round altars slipped off a barge and was lost in the river before it could be removed to a museum. It’s still waiting to be rediscovered.​ 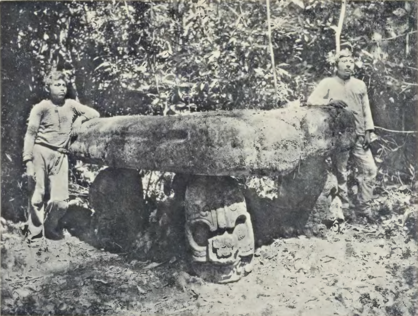 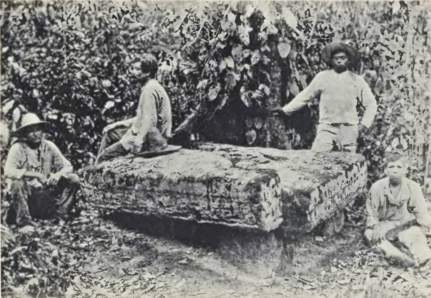 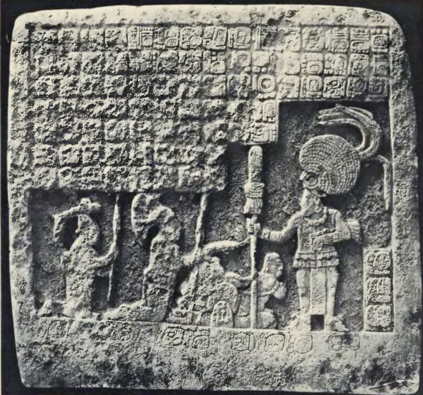 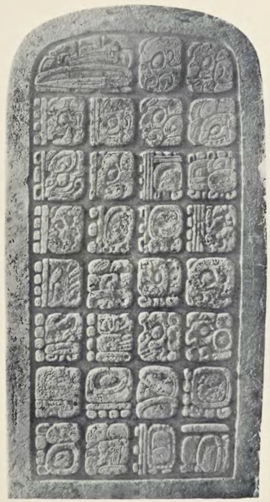 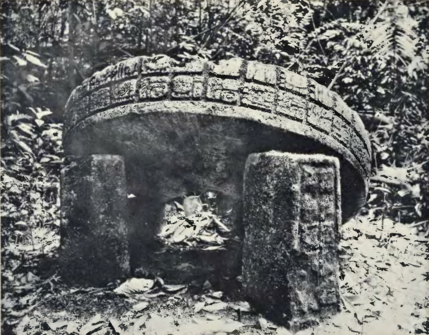