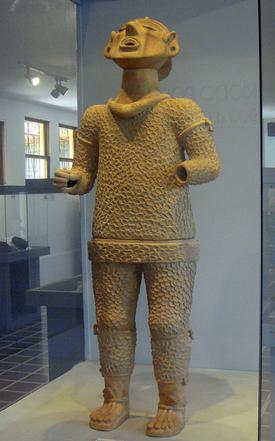 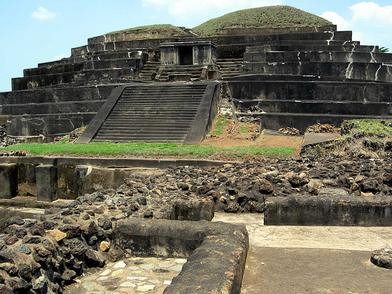 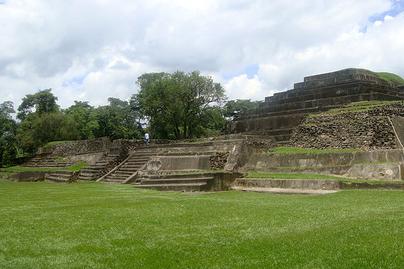 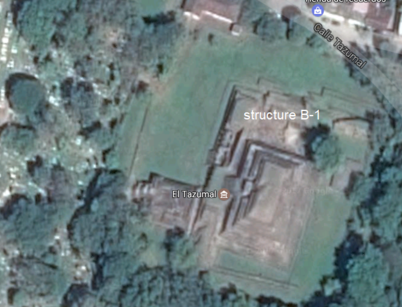 DESCRIPTION
Tazumal is an archaeological zone located in the western part of the country, and was first settled in the Pre Classic (1000 B.C.-200 A.D). It is situated in the present day town of Chalchuapa at the end of one of its main streets. The site is part of the larger Chalchuapa Archaeological Zone that includes the nearby sites of Casa Blanca, which is literally blocks away, El Trapiche, and Las Victorias.

The archaeological park is easy enough to visit as there is only one main group located within the park. The complex contains a few structures that incorporate pyramids, platforms, temples, and a ball court.

The site is reached by traveling northwest out of the Capital on the Pan American Highway, about 40 miles/64 kms.  Once in Chalchuapa a cross street with signage leads up to the site.

HISTORY AND EXPLORATION
Tazumal has a settlement history that extends back to the Early Pre Classic (1000-800 B.C.). It was part of an extensive trade network that linked with the Pacific slope sites such as Tak’alik Abaj, the Guatemalan Highlands, and on over to the Gulf of Mexico. There is a strong Olmec stylistic influence shown through a boulder relief at the site, and reflects the southern most influence of this great culture.

Monumental architecture appears at the site by the Late Pre Classic (300 B.C.-200 A.D.). All activity came to a halt with the eruption of Ilopango Volcano in 260 A.D. This event had disastrous results for much of El Salvador, and disrupted trade routes throughout the Maya area.

Building activity resumed in the 5th century, and continued through the Late Classic (600-900 A.D.), though the city never regained its prominence and was possibly abandoned by the end of this period. Some of the earliest metallic objects found in the Maya area have been excavated here. A separate cultural group, Pipil, may have taken up residence at the end of the Post Classic (900-1200 A.D.), and undertaken some modifications.

Excavations and restorations took place in the 1940’s by Stanley Boggs. Further investigations have consolidated some of the structures and on-going excavations have revealed a number of burials and artifacts.

STRUCTURES
The main structure at Tazumal is a multi-tiered pyramid which rises to a height of 75 feet/23 meters, and is known as Structure B-1. The final structure appearance represents a number of construction phases. There are platforms that extend out along the pyramid base. A central stairway leads up the west side of the pyramid to a terrace that once contained a number of rooms, and is referred to as the Temple of the Columns. A second grand stairway leads further up to a free-standing temple built on a narrow terrace. The summit of the pyramid held another temple structure. A number of burials have been found here.

Adjoining Structure B-1 on the southwest side is Structure B1-2 set on a rectangular platform, and has not been fully restored. A series of stairways lead up three terraces from the west side to an unrestored summit structure. This summit structure contained three chambers that were accessed via a central chamber or courtyard. The height of this structure is about 23 feet/7 meters.

A ball court consisting of two low platforms, Structures 3 and 4, is located within an adjoining community cemetery. The structures have yet to be restored. An additional temple structure is located there as well. There are also several other smaller structures located outside the park that have yet to be excavated. An interesting circular structure that was reported on in the 1940’s has unfortunately been destroyed to make way for a residence.

Monument 1 is located near the entrance, and contains glyphic inscriptions and calendrical information. In this same area is a large boulder relief with Olmec style carving. .The museum contains a great ceramic sculpture of the central Mexican deity Xipe Totec. 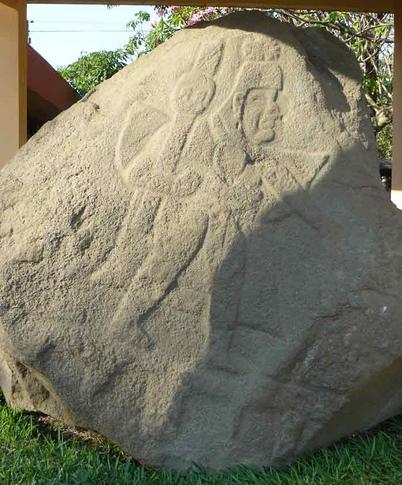